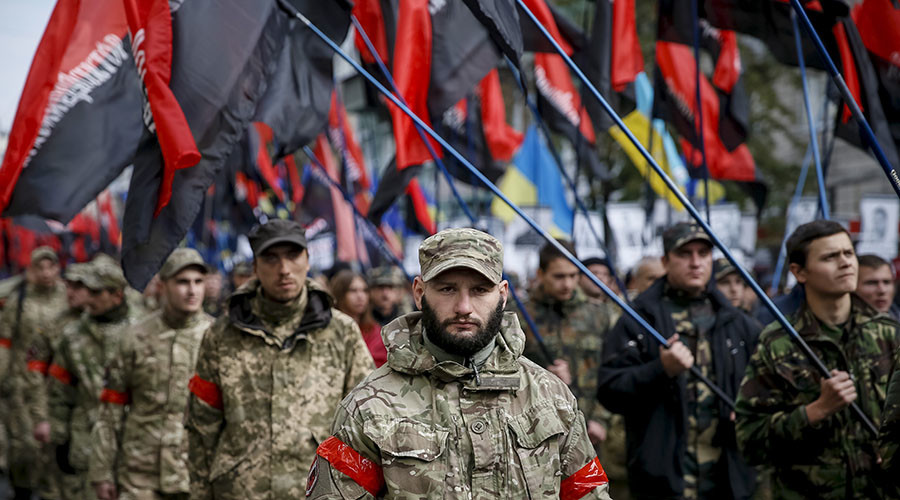 11 May 2017 – Oscar Wilde’s work thrived on tangents. After all, a writer gifted with such a repository of wisecracks needed space to deliver them. Thus, he observed things like how “the man who could call a spade a spade should be compelled to use one. It is the only thing he is fit for.”

Wilde’s flowery and windy prose was so successful that oodles of his contemporaries aped it. As a result, by 1910, Joseph Devlin led a backlash against overwrought discourse through his book “How to Speak and Write Correctly.” Devlin observed: “for instance, you may not want to call a spade a spade. You may prefer to call it a spatulous device for abrading the surface of the soil. Better, however, to stick to the old familiar, simple name that your grandfather called it.”

Just as today’s western correspondents in Kiev have all kinds of terms for a particular cancer that has been eating away at Ukraine for some years. Especially since the 2014 ‘Maidan’ coup/revolution, which they all unequivocally supported. The malignant growth concerned is the far right, enjoying a relentless rise since the violent overthrow of Viktor Yanukovich. A change of power, of course, that couldn’t have happened without the muscle and fanaticism they provided.

Since late 2013, when the first protesters massed in Kiev’s Maidan square, there’s been a particular problem with what Western readers are consuming about Ukraine. Put simply, the continuing reluctance of Kiev-based hacks (and plenty in Moscow too) to call a neo-Nazi, a neo-Nazi. Instead, we read terms like “nationalists,”“right sector,”“patriots” and “militants.” And it’s rarely explained how these headbangers are the tail wagging the government dog. Imposing economically-ruinous blockades which politicians oppose but are powerless to resist out of fear of the heavily-armed, dingbats turning on them instead.

Of course, this is if the hacks mention them at all. Frequently, their very presence at events is completely ignored or dismissed with euphemisms like “activists” or “demonstrators.” As if they were a cuddly band of non-dangerous fascists.

In recent years, Victory Day, when people of the former Soviet Union celebrate the 1945 defeat of Hitler’s Germany, has been a sore point. You see, the lunatic fringe can’t join in because their forefathers happened to be on the losing side. But this hostility was relatively subdued (outside of the Lviv region) until the Maidan coup/revolution empowered the fanatics to dictate to the civilian leaders they helped place in power.

That’s why instead of military parades on May 9th, we now see torchlight marches, at various times of the year, dedicated to Nazi collaborators like Stepan Bandera. And it’s reached the stage where descendants of Second World War heroes from the winning side are unable to commemorate their forefathers unfettered.

This week it happened again. In Kiev and other Ukrainian cities, participants in the festivities were attacked. And the media coverage was almost non-existent. As the first reports of violence emerged on Russian social media, I started to search for news from the scene. Knowing how Russian journalists are restricted from Ukraine, I believed Western correspondents would be the best sources.

So, I searched the Twitter feeds of Kiev-based reporters for news. And the myopia was staggering. Despite claiming to be mostly based in Ukraine, there was nothing on Daily Telegraph writer Roland Oliphant’s page, except a retweet of a BBC source about how “ultra-nationalists” were “shouting abuse.” Next, I tried Maxim Eristavi, a lobbyist at NATO’s Atlantic Council adjunct, who writes extensively across Western media about Ukraine. Again his lens was turned toward Russia. With attempts to denigrate the Moscow celebration and nothing, zilch and nada about events under his nose.

Who next? Maybe the Financial Times’ Max Seddon, who was a vociferous supporter of Maidan? Sadly, another total blackout. Save for a bizarre, childlike, May 8th tweet about Russian felines, suggesting he might still be pining for his cat video days at Buzzfeed.

Frustrated at this stage, the final option was Christopher Miller. The Kiev-based hack who covered Maidan for a local paper, The Kyiv Post. He’s now US state broadcaster RFE/RL’s main man in the Ukrainian capital and was bound to have his finger on the pulse. But, amazingly, he’d either lost his metro ticket, news sense, moral compass, or perhaps all three. As the clashes took place, Miller was also fixated on Moscow.

At this point, I called him out on Twitter. And, lo and behold, a couple of hours later, he managed a pithy tweet telling his followers “Clashes Mark Victory Day In Ukraine.” That linked to a one-sentence news report, “The anniversary of World War II was marked by scuffles and dozens of arrests in Kyiv and other Ukrainian cities,” which kind of indicates how reluctant RFE/RL was to cover the violence.

There was also a video attached, where a plummy English voice told us how “Ukrainian nationalists (that term again) clashed with a march called the ‘Immortal Regiment,’ (in) which people carry portraits of loved ones killed in World War Two.” And here you can stop the lights because it’s not even true. In reality, the relatives don’t need to have died in the conflict to earn participation in the memorial, which shows how half-arsed the ‘coverage’ was.

Miller seems to have a problem with facts. Which of course, may be down to poor training, rather than malice. Especially given how the Kyiv Post is hardly a place capable of offering professional guidance, instruction or schooling in journalism. For evidence, look at this tweet

@wikileaks @RT_com I must have glanced over then. You happen to have time stamps (not just release date) for the latest email? Just curious.

where he betrayed a lack of basic understanding of how the craft works when attempting to smear RT and WikiLeaks as being somehow in collusion. “Earlier today, @RT_com tweeted & pubbed (sic) a story on (the) fresh @wikileaks Podesta emails dump before WL (Wikileaks) posted them to the site & tweeted a link,” he wrote.

In reality, RT had secured a good old-fashioned scoop by noticing the release before other media organizations twigged it.

Furthermore, despite Twitter users advising him to delete his erroneous tweet, it still sits on his page, proud as a peacock, and has been shared over 3,500 times. Most notably by Brian Fallon (Hillary Clinton’s press secretary), who spread the “fake news” with his own tag “More evidence of Russian collusion with @Wikileaks in service of Trump.”

.@ChristopherJM Maybe you should delete yr original tweet? You've spread false info to 2k ppl. It's a bad look on a journalist. @wikileaks

In fairness, Miller’s choice not to report on the May 9th violence in Kiev may not have been his alone. After all, the BBG (RFERL’s parent) imposes some incredible restrictions on how its reporters can operate. Far more so than equivalent state media like BBC, RT or Deutsche Welle. For instance, the opening line of its

“standards and principles” states how the service must “be consistent with the broad foreign policy objectives of the United States.” Also, it should offer a “clear and effective presentation of the policies, including editorials, broadcast by the Voice of America, which present the views of the United States Government.” Furthermore, the BBG needs to be capable of “provid(ing) a surge capacity to support United States foreign policy objectives during crises abroad.”

And we all know that US policy in recent years has been to offer unconditional support to the pro-Western Kiev regime. While these are incredibly stringent conditions for reporters to work under, it’s surely time for RFE/RL, and Western hacks in general, to stop glossing over the true origins of Ukraine’s “ultra-nationalists.” After all, if it looks like a Nazi, behaves like a Nazi, and talks like a Nazi, then it probably is a Nazi.