Aung San Suu Kyi can take advantage of her personal and political authority to forge a lasting peace in Myanmar. 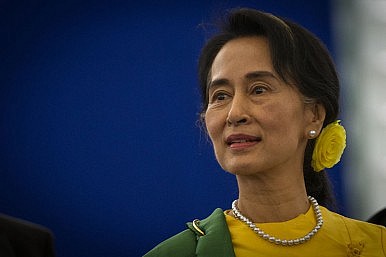 11 Jun 2016 – Aung San Suu Kyi’s new civilian government is in a unique position to radically change the status of ethnic relations in Myanmar. As Suu Kyi’s remarks alongside Secretary of State John Kerry on May 22 made clear, minority rights and civil strife are still pressing issues that the international community is waiting for her to address. In her statements, she prioritized finding “a practical solution” to these matters. Such options are available to her. Using her malleable set of responsibilities and public image, she can implement new policies to end the civil wars in her country by appealing to the historical precedent set by her father in the Panglong Agreement of 1947.

The Union of Myanmar has been in a state of internal conflict for nearly 70 years. The national armed forces (Tatmadaw) continue to battle an array of ethnic-based insurgencies along the country’s periphery. Of these, the most kinetic ongoing conflict is with the Kachin Independence Army (KIA), who enjoyed de facto autonomy in their northern state for several decades before the central government launched an offensive in 1994 and set off a series of civil wars that continue to this day.

Since 2011, fighting in and around Kachin State has displaced 100,000 people, jeopardized economic development and brought international rebuke. The root cause of the fight with the Kachin, and of nearly all ethnic insurgencies in Myanmar, can be traced back to the government’s failure to honor the 1947 Panglong Agreement, in which General Aung San (the founding father of post-colonial Burma and the country’s armed forces, as well as Aung San Suu Kyi’s father) guaranteed autonomy to the “frontier areas.” Taking advantage of her unique historical position, Suu Kyi can use her father’s promises to find a workable solution to today’s civil wars.

Aung San Suu Kyi finds herself in a leadership post enjoyed by few in recent memory. As the head of an overwhelmingly dominant political party (the National League for Democracy), which swept into office during last year’s historic election, she controls a well-developed national network and enjoys a groundswell of public support nationwide. She occupies multiple executive roles in the new government, including that of foreign minister, which allows her to sit on the powerful National Security and Defense Council, as well the newly created position of state counselor, which gives her a rhetorical decision-making position “above the president.” Finally, and perhaps most importantly, Suu Kyi is the sole inheritor of her father’s political legacy. The family’s collective sacrifices in support of advancing the cause of freedom for their country bestow an unquantifiable element of national support to Suu Kyi. She should use it while it lasts to accomplish something major, before she is required to dirty her hands in the day-to-day business of governing the country.

The Tatmadaw’s decades-long failure to achieve a lasting peace in Myanmar – either by honoring the Panglong Agreement themselves or by achieving a decisive military victory – has opened the door to alternate means. In her role as president of the NLD, Suu Kyi can negotiate directly with members of the Kachin Independence Organization (KIO), the political wing of the KIA, in party-to-party talks. Negotiating the accord as a the leader of a political party, rather than as an executive in the government, would allow Suu Kyi to circumvent some of the bureaucratic hurdles put in place by the Tatmadaw and give her team increased maneuverability in their negotiating stance.

A framework agreement could take the 1997 Chittagong Hills Peace Accord as a model, establishing a Kachin Regional Council (KRC) subordinate to the foreign ministry, with limited authority over law enforcement and civic matters in Kachin State. The KRC would allow the Kachin to maintain autonomy over issues related to tribal interests, thereby minimizing grievances and reducing incentives for violent protests. This policy draws historical precedence from the text of the Panglong Agreement, which accepts as principle “full autonomy in internal administration of the Frontier Areas.”

The goal of such an accord is to find an end to the war in Kachin. As such, the only outcome that could be considered a success for the NLD is a complete end to hostilities with the KIA. In return for the NLD granting the Kachin their greatest measure of autonomy since 1947, the KIO should in return guarantee a complete cessation of all hostilities, a halt to illicit cross-border trade, and full transparency about future business licensing, revenues, and taxation

Any attempt by the NLD to mandate certain responsibilities to the KRC would likely be met with hostility by the KIO. However, it is imperative that the Kachin actively participate in determining the roles of the KRC. The Panglong Agreement itself can serve as a starting point and guide-post for these structures. The imprecise wording of the accord can provide the NLD flexibility to ensure that too much power is not yielded to the KRC. In 1947 the Kachin and other signatories to the Panglong Agreement agreed on the principle of full autonomy in internal administration of the Frontier Areas; no specific powers were ever promised. Measures of autonomy that could potentially be ceded to the KRC may include: the authority to draft and enforce tribal laws, the authority to oversee disaster relief and management, and the authority to manage development projects and to issue licenses for industry and resource allocation.

Precise responsibilities would be agreed upon at the discretion of the negotiating team and Suu Kyi. However, the Panglong Agreement does clearly state, “Citizens of the Frontier areas were to enjoy the rights and privileges regarded as fundamental in democratic countries.” Therefore, the NLD negotiating team should push for local elections to be the mechanism for appointing members to the KRC. This mechanism is also consistent with the pillars of the NLD party platform: National Reconciliation, Rule of Law, and Multi-Party Democracy.

Successful negotiation and implementation of such an accord would depend on Suu Kyi’s capacity to successfully shepherd the NLD’s external and internal affairs and to seamlessly shift between her roles in the executive branch and in her political party. The political capital bestowed upon the NLD following last year’s election gives the party a certain amount of leverage when working on national issues; however, it would be a mistake to overestimate the Tatmadaw’s flexibility or to underestimate their capacity to disrupt the implementation of such an accord. Therefore, the NLD would need to appeal directly to the highest levels of the Tatmadaw, emphasizing the benefits of a civilian-led peace plan and highlighting the following issues:

The generals have already shown themselves open to reform. This year’s successful transition to a civilian-led government is testament to their willingness to change course. They should likewise welcome a civilian-led peace process, which would shift responsibility from their shoulders, and allow them to lay the blame for any failure at the feet of Suu Kyi.

To successfully implement such an accord, a special Kachin Transition Team (KTT) would need to be formed. The team, composed of NLD party leaders in Kachin State, would work closely with the NLD representatives in the Kachin State Hluttaw to draft appropriate legislative reforms that cede authority in certain areas of legislation and law enforcement; disaster relief and management; and licensing and development authority to the new KRC. Even though the KRC would be subordinate to a national level body, state level cooperation is integral for the KRC to function as planned.

It is likely that certain NLD members will be concerned that granting greater autonomy to minority groups would cost the NLD both national and state-level parliamentary seats. In both the House of Nationalities and House of Representatives, the NLD has such an overwhelming majority that a small loss of seats to regional political parties would not have an enormous effect, and may even serve to grow its governing coalition. However, this fact will be of little comfort to those MPs that lose their seats. NLD leadership should meet individually with concerned members to explain that MPs who actively support Suu Kyi’s Kachin Peace Accord will be seen by their constituency as on the right side of history and will receive financial and rhetorical support by the NLD in their next elections.

If the Regional Council model proves successful at stabilizing Kachin and bringing its drawn out civil war to an end, it could easily be replicated with other minority groups in Myanmar. The Karen, Mon, and Rohingya would all welcome the opportunity to take their destiny into their own hands.

Aung San Suu Kyi and the NLD find themselves at a historical turning point. The international community is waiting for Suu Kyi to pick up the mantle of her father’s legacy and find a practical solution to the minority rights issues and civil strife that continue to plague the Union of Myanmar. Her chance to act is now.

Daniel Combs is a candidate for a Masters degree in International Security Policy at Columbia University’s School of International and Public Affairs, where he focuses on non-traditional security challenges in East Asia and Subsaharan Africa. He previously worked in Ethiopia, where he managed public health projects.

One Response to “Solving Myanmar’s Ethnic Conflicts: A Proposal”