23 Jul 2016 – The United Nations Human Rights Council, along with the global community and many in Lebanon, has become increasingly concerned about the massive violations of Palestinian civil rights. As noted in Part I of this discussion, Palestinians in Lebanon suffer from more than two dozen targeted violations including ambiguous legal status, absence of protection; the outlawing of their right to work and to own a home or real property; adequate housing; health; fair trial; freedom of association; opinion and expression; freedom of movement, accommodation and travel, among others. Forbidding Palestinian refugees in Lebanon from working in all but menial jobs is a major reason UNWRA calculates that 70% are living below the poverty line.

In an effort to stop these kinds of violations, on March 15, 2006, the UN General Assembly passed GAR 60/251 thus creating the Human Rights Council (HRC) in order to “undertake a Universal Periodic Review (UPR) based on objective and reliable information, of the fulfillment by each country of its human rights obligations and commitments.” 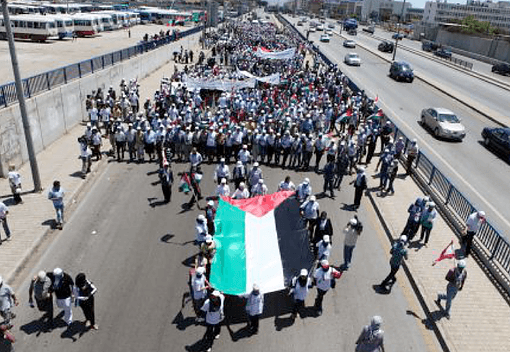 The Universal Periodic Review (UPR) is a significant innovation for International humanitarian law and constitutes a unique process which conducts a periodic review of the human rights records of all 193 UN Member States. The UPR is designed to prompt, support, and expand the promotion and protection of human rights in specific locations where human rights violations are widespread. That includes Lebanon.

The UPR Working Group (UPRWG) has assessed the extent to which Lebanon respects its human rights obligations under the UN Charter; (2) the Universal Declaration of Human Rights; (3) human rights instruments to which Lebanon is party through treaty ratification or bound by International Customary Law, (4) voluntary pledges and commitments made by Lebanon (e.g. national human rights policies and/or programs implemented); and, (5) applicable international humanitarian law.

Sources for the HRC review and decisions relating to Lebanon’s treatment of Palestinian refugees include:

Lebanon’s Universal Periodic Review was last conducted in November, 2015 during the 23rd session of the UPR Working Group and its government has the primary responsibility to implement the recommendations contained in the UPR. The Human Rights Council is mandated to hold countries accountable for progress or failure in implementing its recommendations. During the second review the State is expected to provide information on what they have been doing to implement the recommendations made during the first review as well as on any developments in the field of human rights. If necessary, the Human Rights Council can apply various sanctions to States which are not co-operating.

The record of Lebanon before the Human Rights Council with respect to Palestinian refugees has been and remains, dismal. The government of Lebanon has ignored HRC recommendations, failed to act on human rights violations toward Palestinian refugees that it pledged to remedy, has not complied with human rights conventions it has ratified, and has even failed to implement its own National Plan to redress violations towards Palestinians.

The record of the Government of Lebanon makes a mockery of paragraph B of the Preamble of its Constitution pledges that “Lebanon as a founding and active member of the United Nations Organization is committed to its covenants and the Universal Declaration of Human Rights.”

It is true that the Government of Lebanon appeared to exhibit some good will to improve the socio-economic rights of Palestinian refugees when Parliament passed an amendment to Labor Law 129 /2010, Article 59, and the Social Security law 128/2010, Article 9. However, neither of these modest amendments have to date, six years later, been implemented. Neither has even published in the council of Ministers- COM Decisions. Consequently, their application depends on the arbitrary decision of sectarianized Labor Ministers. To date none has acted to implement the modest 2010 amendments.

The Human Rights Council is considering measures it needs to take in the case of Lebanon’s persistent non-cooperation with its Universal Periodic Review. Lebanon will increasingly face international opprobrium and likely also sanctions over its treatment of Palestinian refugees. In addition, there is a realistic prospect of civil rights demonstrations from its victims in the country’s 12 refugee camps and 24 “gatherings.”

It is clear that for many human rights organizations, including the UN Human Rights Council (HRC) and NGO’s inside and outside of Lebanon who has verified much of the data presented by this observer in this appeal to Lebanon’s parliament, that the widespread deprivation of elementary civil rights for Palestinian refugees in Lebanon is not sustainable. Increasingly these violations are being resisted locally and globally.

Today the government of Lebanon has the opportunity to come into compliance with internationally mandated human rights and to redress nearly seven decades of violations of Palestinian civil rights.

Lebanon can redress its humanitarian shortfalls by implementing the following proposed essential remedial measures. By so doing, Lebanon will, diplomatically speaking, “come in from the cold” and earn the gratitude and respect of the global community and of all people of goodwill.

Status of Palestinian refugees in Lebanon. Lebanon’s Parliament must enact legislation that provides a clear definition of Palestinian Refugee status that guarantees civil, socio-economic rights and the opportunity to live in dignity.

Specifically, the Government of Lebanon must issue official ID’s to “Non-ID” Palestinians thus granting them legal personality and equality with other refugees. It must also recognize the legal status of Palestinian refugees from Syria as refugees in Lebanon. The law must treat all Palestinian Refugees equally without discriminating between non-registered with UNRWA and those registered with government agencies. In 2008 the government of Lebanon issued a small number of identification documents valid for one year, which allowed some NON-IDs to move within Lebanon only, with the result that only a very small fraction of Non-ID Palestinians benefited from this process. Yet, as of July 20, 2016, more than 5,000 people from this category are still deprived of basic human rights including the right to health, higher education and employment in dozens of fields. It is also impossible for Non-ID Palestinians to register marriages, since if one of the couples has no identification documents, their children, now numbering in the thousands, are deprived from being officially registered and consequently are state-less without any residency permits or civil rights.

Lebanon’s discriminatory residency policy also affects non-Palestinian refugees from Syria. According to a just released 87-page Human Rights Watch (HRW) report, ‘Growing Up Without an Education’: Barriers to Education for Refugee Children in Lebanon,” More than half of the nearly 500,000 school-aged Syrian children registered in Lebanon are not enrolled in formal education. Although to its credit, Lebanon  which is hosting 1.1 million registered Syrian refugees  has allowed Syrian children to enroll for free in public schools, limited resources and Lebanese policies on residency and work for Syrians are keeping children out of the classroom. According to HRW, Lebanon is also imposing harsh residency requirements that restrict refugees’ freedom of movement and exacerbate poverty, limiting parents’ ability to send their children to school and contributing to child labor. Secondary school-age children and children with disabilities face particularly difficult obstacles.

The government of Lebanon must also register and complete the issue of identification documents for newborns of Palestinian refugees from Syria, as required by the International Child Convention ratified by Lebanon. At the same time it must grant Palestinian refugee Women who are married to Lebanese men the opportunity of acquiring Lebanese nationality if they so choose.

In addition, the following measures must be taken by Lebanon’s Parliament in order to comply with its internationally mandated civil rights obligations.

Replace the oppressive security measures, many of which constitute arbitrary harassment and isolation of Palestinian camps, with new measures based on legitimate security needs. Allow Palestinian refugees to visit ‘no go’ areas of south Lebanon where many used to live and from which they can view Palestine.

Home Ownership. End discrimination against Palestinian Refugees by amending law 296/2001 and allow Palestinians to own real estate, including ending the arbitrary actions that prevent the registration of property purchased before amending law 296/2010, and complications when transferring the ownership of inherited real-estate, and cancel the time limitation for Surveyed Sale Contracts. Additionally, Lebanon’s Parliament must end discriminatory impediments currently blocking foreigners married to Palestinian Refugee Women from owning property.

Intensify efforts to reconstruct Nahr Al–Bared camp guaranteeing the return of its 23,000 residents.

Accelerate Due Process trials for the detainees of Nahr Al-Bared and release and compensate those proven innocent.

Stop the exile of Palestinian refugees from Syria and grant them a Due Process of Law trial in cases involving accusations of criminality.

Enact legislation to protect Palestinian refugee women from abuse while enacting a minimum age for all marriage based on consent which includes deterrent penalties to punish those responsible for the dramatic increase of child marriages of Palestinian refugees from Syria.

Grant the right to free Opinion, Expression and forming Associations while ending the rampant discrimination in allowing the right of Demonstration only to Lebanese citizens while depriving Palestinian refugees of these internationally mandated civil rights.

Franklin Lamb volunteers with the Beirut-Washington DC based Palestine Civil Rights Campaign (PCRC). In Part II of this III Part series Lamb will offer Lebanon’s Parliament specific proposals to achieve compliance with Lebanon’s international legal obligations with respect to Palestinian refugees forced into Lebanon from their own country, Palestine. His new book, The Case for Palestinian Civil Rights in Lebanon: Why the “Resistance” Sleeps, is expected by late summer. He is reachable c/o fplamb@gmail.com.

Anticopyright: Editorials and articles originated on TMS may be freely reprinted, disseminated, translated and used as background material, provided an acknowledgement and link to the source, TMS: A Roadmap for Lebanon to Grant Civil Rights for Palestinian Refugees in Lebanon, is included. Thank you.