3 Aug 2016 – New reports accuse employees of Broadspectrum Limited, the company that has the operating contract to house asylum seekers to Australia in remote island detention centers, of providing appalling living conditions and neglecting the care of their charges. 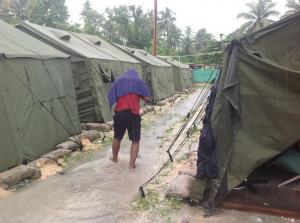 A report issued last October by activist group No Business In Abuse (NBIA) in Melbourne found that Broadspectrum had been accused of a “whopping 47 violations of international law” at the detention centers.

For example, the NBIA report quoted Natasha Blucher, a former Save the Children Australia employee, who stated that the company was reluctant to provide shoes to the 129 children living at the Nauru detention center despite the fact that temperatures frequently reached over 45 degrees Celsius. (113 F)

Media organizations have also dug up other examples of abuse and neglect at the Broadspectrum managed camps. The Sydney Morning Herald uncovered data shows that showed there were 188 incidents of self-harm involving asylum seekers at Nauru, in the first six months of 2015.

NBIA followed up their 2015 report with a list of investors in Broadspectrum and its owner, Ferrovial of Spain. “We are calling on (European banks) to remove support from Ferrovial given its likely complicity in gross human rights abuses,” Shen Narayanasamy, executive director of NBIA, told the Sydney Morning Herald.

Other recent human rights reports have confirmed the scale of abuse and neglect at Broadspectrum detention camps. In early August, Amnesty International and Human Rights Watch issued a joint report after the two organizations spent 12 days conducting in person interviews with 84 detainees on Nauru. (Access to the detention centers is rare and media organizations are rarely allowed to visit the 21 square kilometer island.)

“Australia’s policy of exiling asylum seekers who arrive by boat is cruel in the extreme,” Anna Neistat, senior director for research at Amnesty International, said in a statement. “Few other countries go to such lengths to deliberately inflict suffering on people seeking safety and freedom.”

“This is an astounding situation — astounding in the worst possible sense,” Michael Bochenek, senior counsel for children’s rights at Human Rights Watch, told the Washington Post. “It’s difficult to come up with a parallel where a government has taken such steps to prevent people from seeking freedom by taking ‘vulnerable people’ and transferring them to a speck of land and saying that is an adequate response to the needs of refugees and asylum seekers.”

Meanwhile, an investigation by the International Human Rights and Conflict Resolution Clinic at Stanford Law School suggests that Ferrovial could be held liable for the abuses. “Based on our examination of the facts, it is possible that individual officers at Ferrovial might be exposed to criminal liability for crimes against humanity under the Rome Statute,” Diala Shamas, a lawyer at the Stanford clinic, told the Guardian newspaper. “We have raised our concerns with Ferrovial in a private communication to their officers and directors detailing our findings. We have yet to hear back.”

Broadspectrum has denounced the investigations into its affairs. “We are concerned with the potential impact that any misinformation may have on our investors and more than 25,000 employees across a range of sectors,” the company said in an official statement. “No charges have been laid against any of our staff in respect to any dealings with asylum seekers on Nauru or Manus Provinces.”

However Ferrovial appears unnerved by the protests and the details that have emerged so far. “In relation to the provision of services at the regional processing centres in Nauru and Manus province, these services were not a core part of the valuation and the acquisition rationale of the offer, and it is not a strategic activity in Ferrovial’s portfolio,” the company said in a statement in May. “Ferrovial’s view is that this activity will not form part of its services offering in the future.”

Narayanasamy says that the Spanish company is being smart. “It looks as if Ferrovial has seen the error of its ways and is trying to back away from the legal and financial liabilities that have been so apparent in the commercial operation of these illegal camps,” she told the Sydney Morning Herald.

Disclaimer: The author of this article is a member of the board of directors of Amnesty International USA.