As a world citizen colleague of mine Theodore Potnzen points out in his chapter of this book “Democracy and Peace: Interrelated but not interdependent:”

“Thus it may be safely, yet regretfully, assumed that Democracy does not exclude War and therefore bears no direct relationship to Peace. The reverse is equally true − Peace may reign without any consideration of democracy (cf Pax Romana).”

This collection of essays deals largely with education and conflict resolution in the States that were “British India”: India, Pakistan, Bangladesh and Sri Lanka. Each State is a parliamentary democracy, but each has been involved in violence both internally and among each other: India-Pakistan, Pakistan and what became Bangladesh as well as strong Sri Lanka-India tensions during the civil war in Sri Lanka. By and large the elected members of Parliament went along with the aggressive policy of the Executive as did the educational systems. Only in Sri Lanka were there university-faculty based efforts to mediate in the civil war. 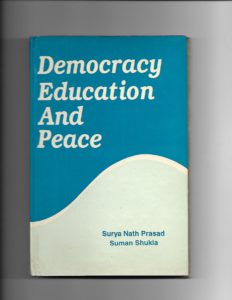 In theory, educational institutions located in areas of significant inter-group conflicts and war-torn societies deserve special support to contribute to a culture of peace in the surrounding community. Attention should be given to the role of textbooks as instruments of a culture of peace. Education for conflict resolution, human rights and popular participation ought to be transmitted through the entire process of education, including through a participatory atmosphere of educational institutions.

Again in theory, educators could teach peaceful conflict resolution by example. Teachers transmit knowledge, values and attitudes as well as skills. As Narayan Bose points out in his essay “Notes on Peace Education” teachers could be engaged in the task of reducing class and ethnic conflicts and mobilizing efforts towards harmonious human relations and working for the common good. The book has a useful bibliography as there are numerous guides on peace education that might be used.  There are certainly positive examples of teachers who are active in teaching and practicing conflict resolution skills. The question remains, however, why, given the large number of schools and universities in the world, is there so little impact in practice?

Anticopyright: Editorials and articles originated on TMS may be freely reprinted, disseminated, translated and used as background material, provided an acknowledgement and link to the source, TMS: Democracy Education and Peace, is included. Thank you.