The U.S. presidential candidates can be looked at from the perspective of Haiti. One candidate has an extensive record there. The other has some historical parallels.~ 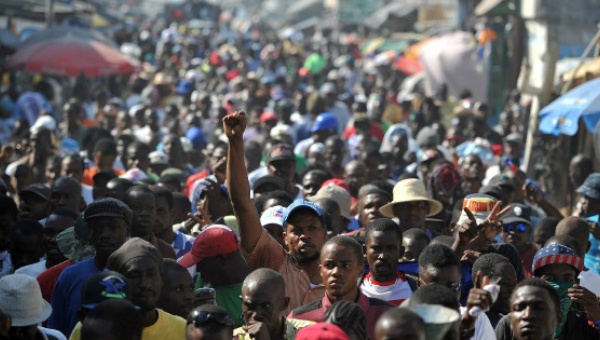 Demonstrators march during a protest in Port-au-Prince, January 2016. | Photo: AFP

28 Jul 2016 – The U.S. invaded and occupied Haiti 101 years ago today, and remained there for 19 years. Accomplishments of the occupation include raiding the Haitian National Bank, re-instituting slave labor, establishing the hated National Guard, and getting a 25-year contract for the U.S. corporation, United Fruit.

There was a pretext for the invasion—the assassination of Haiti’s president in 1915. But to understand the event, which has lessons to draw from a century later, it is necessary to look more closely at the invader than the invaded.

In 2016, the United States is living through a presidential campaign with a candidate willing to exploit racism and pander to anti-immigrant sentiment. Police are killing Black people in cities across the U.S.

Having drawn down troop levels in its two big wars in Iraq and Afghanistan, the U.S. still runs airsrikes and drone strikes in the region and covert actions all over the world. The U.S. is still the determining voice in Haiti’s politics and economy. In other words, 101 years after its invasion of Haiti, the U.S. retains two features: violent racial inequality and empire.

The U.S. presidential candidates can be looked at from the perspective of Haiti. One candidate has an extensive record there. The other has some historical parallels.

The Clintons have treated Haiti as a family business. In 2010, after an earthquake devastated the country, the Clinton Foundation was among the horde of non-governmental organizations that stepped up their role in the, still unfinished, rebuilding phase. Haiti’s social sector had already been taken over by NGOs and its streets—since the 2004 U.S.-led coup and occupation—were patrolled by United Nations troops.

The Clinton Foundation received pledges of hundreds of millions of dollars in development aid to rebuild Haiti. The crown jewel of the Foundation’s work: the disappointing Caracol Industrial Park, opened in 2012, which promised and failed to expand Haiti’s low-wage garment-processing industry, long a source of foreign profits and little internal development.

Hillary Clinton made her own interventions into Haitian politics as secretary of state. At a key moment in Haiti post-earthquake politics, Clinton’s state department threw its weight behind presidential candidate Michel Martelly.

His electoral legitimacy was dubious and his presidency led the country to a constitutional crisis when people mobilized against another stolen election in 2015. That crisis is still ongoing, and will no doubt provide pretexts for the next U.S. intervention.

To try to imagine the impact of Trump on Haiti, one need only look back a century. As Trump continues his seemingly unstoppable march to the White House, he is compared to Italy’s Silvio Berlusconi and other populist buffoon-politicians. Woodrow Wilson, the invader of Haiti in 1915, may be a better example of the damage a president can.

When Woodrow Wilson became president, he set about doing what today would be called “Making America Great Again.” Decades had passed since the U.S. Civil War. The post-war Reconstruction involved efforts to desegregate cities and government workplaces and make a place for newly-freed Black people.

Wilson reversed these efforts, strengthening racial apartheid in the U.S. His administration made sure there were separate bathrooms in federal government offices.

Although Trump is unlikely to re-introduce segregation, something else happened under Woodrow Wilson’s rule that is relevant in this context: white vigilante violence and lynchings spiked.

Wilson created a permissive environment for such atrocities. First elected in 1912, Wilson only got around to making a statement against organized white violence—called “mob violence” or “race riots”—in mid-1917.

The US in Latin America: Obama for Now, Maybe Worse to Come…

When more riots broke out in 1919, this time designed to suppress the democratic impulses of Black soldiers returning from WWI, the NAACP implored Wilson to make a a statement. But it was Wilson, himself, who had restricted Black soldiers to non-combat roles during the war.

In foreign policy, Donald Trump’s pronouncements have been predictably incoherent and uninformed. But Woodrow Wilson’s presidency suggests that domestic policies of racism will not be confined to the domestic arena.

Wilson sent U.S. troops all over Latin America—Mexico, the Dominican Republic, Cuba, Panama, Nicaragua and of course, Haiti—which may have gotten the worst of it all. Racist wrath has been a constant in Haiti’s history since it won its independence in a slave revolt, and Wilson unleashed that wrath on the island during the 1915-1934 occupation. Chomsky’s “Year 501″ gives a flavor for what U.S. occupiers were thinking and doing:

“Secretary of State William Jennings Bryan, found the Haitian elite rather amusing: ‘Dear me, think of it, Niggers speaking French,'” he remarked. The effective ruler of Haiti, Marine Colonel L.W.T. Waller, who arrived fresh from appalling atrocities in the conquest of the Philippines, was not amused: “they are real nigger and no mistake … real nigs beneath the surface,” he said, rejecting any negotiations or other “bowing and scraping to these coons,” particularly the educated Haitians for whom this bloodthirsty lout had a special hatred.

Assistant Secretary of the Navy Franklin Delano Roosevelt, while never approaching the racist fanaticism and thuggery of his distant relative Theodore Roosevelt, shared the feelings of his colleagues. On a visit to occupied Haiti in 1917, he recorded in his diary a comment by his traveling companion, who later became the Occupation’s leading civilian official.

Fascinated by the Haitian Minister of Agriculture, he “couldn’t help saying to myself,” he told FDR, “that man would have brought $1,500 at auction in New Orleans in 1860 for stud purposes.”

“‘Roosevelt appears to have relished the story,” (Hans) Schmidt notes, “and retold it to American Minister Norman Armour when he visited Haiti as President in 1934.”

Chomsky conclude this section of horrifically racist quotes from the U.S. elite about Haiti with a warning, “The element of racism in policy formation should not be discounted, to the present day.”

Nor should Haitian resistance.

The U.S. occupation of 1915-1934 faced a rebellion led by Charlemagne Peralte. Marines assassinated him and circulated a photograph of him crucified. Rather than intimidating Haitians, the photo enraged them and cemented Charlemagne Peralte’s place as a national hero.

If Haitians had a say in the U.S. presidential election, a case could be made for the devil-you-know of Clinton rather than the risk of a new Woodrow Wilson in Trump. But subjects of the empire can’t vote, only citizens. The U.S. tried to set the tone of master 101 years ago.