Honduras Is a Giant Graveyard for Human Rights Defenders

Honduras has become one of the most hostile and dangerous countries for human rights defenders. 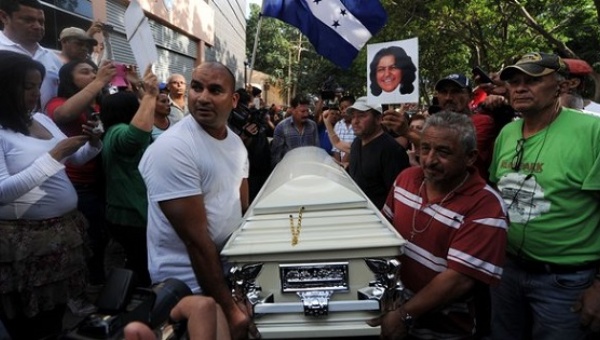 20 Aug 2016 – Honduras has seen at least eight human rights activists killed in 2016, making it one the most dangerous countries in the world for human rights defenders, the United Nations and the Inter-American Commission on Human Rights (IACHR) warned Friday.

In March Goldman Environmental Prize winner Berta Caceres, an Indigenous rights and land defender who tirelessly campaigned against a widely unpopular dam, was assassinated in her home, prompting international outrage. According to Global Witness, at least 109 environmental defenders were killed in Honduras between 2010 and 2015.

The experts cited previous U.N. reports which expose that human rights defenders in the country face extrajudicial executions, disappearances, torture and other violence.

In their statements on Friday, the U.N. experts also highlighted the dangers faced by lawyers and prosecutors involved in cases against impunity and corruption. According to the Honduran Human Rights Commission, 102 lawyers were murdered in Honduras between 2010 and March of 2016.

The most recent example includes the high-profile murder of Kevin Ferrera, a lawyer who worked to empower citizens to denounce instances of corruption.

“We are seriously concerned that this murder was linked to Mr. Ferrera’s legitimate work in defense of human rights, and urge the Government to conduct an investigation to bring to account both the material perpetrators and the intellectual authors of the heinous crime,” The experts stated.

The two high-level officials called on the government to introduce a mechanism to ensure the safety of human rights defenders, calling on an end to judicial impunity.

“Crimes against human rights defenders, especially cold-blooded assassinations, must not go unpunished. Impunity is the enemy – and the undoing – of any protection scheme in place, no matter how comprehensive it may be,” they said.

According to the Honduran Human Rights Commission, 94 percent of the over 100 deaths of lawyers since 2010 have not been punished.