U.S. “think tanks” rile up the American public against an ever-shifting roster of foreign “enemies” to justify wars that line the pockets of military contractors who kick back some profits to the “think tanks.” 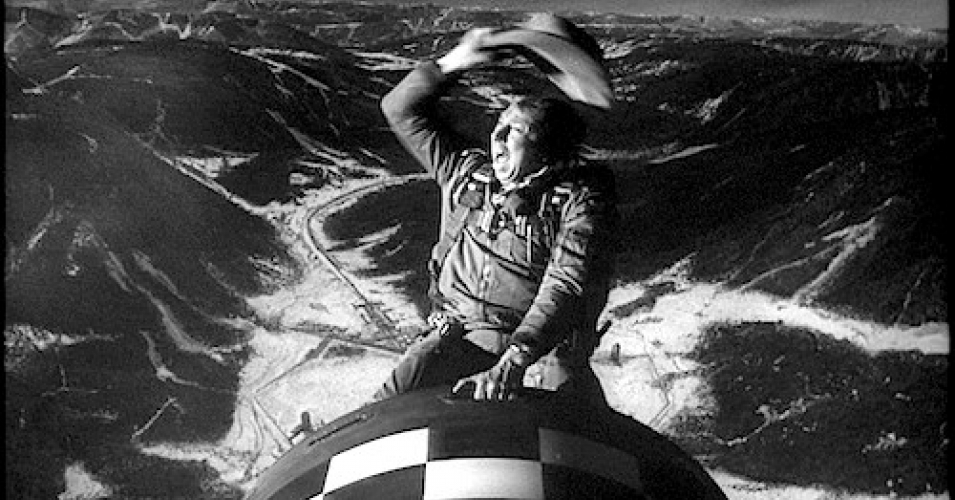 A scene from “Dr. Strangelove,” in which the bomber pilot (played by actor Slim Pickens) rides a nuclear bomb to its target in the Soviet Union. (Screenshot)

Unfortunately, and perhaps predictably, while the Times investigation demonstrates well that the U.S. is even more corrupt – albeit the corruption is better disguised – than the many foreign countries which we routinely accuse of corruption, the Times failed to identify the most egregious form of corruption in our system. That is, those think tanks are constantly engaged in the sort of activities which the Defense Department identifies as “Information War” when conducted by foreign countries that are designated by the U.S. as an enemy at any given moment.

Information warfare uses disinformation and propaganda to condition a population to hate a foreign nation or population with the intent to foment a war, which is the routine “business” of the best known U.S. think tanks.

There are two levels to this information war. The first level is by the primary provocateur, such as the Rand Corporation, the American Enterprise Institute and the smaller war instigators found wherever a Kagan family member lurks. They use psychological “suggestiveness” to create a false narrative of danger from some foreign entity with the objective being to create paranoia within the U.S. population that it is under imminent threat of attack or takeover.

Once that fear and paranoia is instilled in much of the population, it can then be manipulated to foment a readiness or eagerness for war, in the manner that Joseph Goebbels understood well.

The measure of success from such a disinformation and propaganda effort can be seen when the narrative is adopted by secondary communicators who are perhaps the most important target audience. That is because they are “key communicators” in PsyOp terms, who in turn become provocateurs in propagating the false narrative even more broadly and to its own audiences, and becoming “combat multipliers” in military terms.

It is readily apparent now that Russia has taken its place as the primary target within U.S. sights. One doesn’t have to see the U.S. military buildup on Russia’s borders to understand that but only see the propaganda themes of our “think tanks.”

The Role of Rand

A prime example of an act of waging information war to incite actual military attack is the Rand Corporation, which, incidentally, published a guide to information war and the need to condition the U.S. population for war back in the 1990s.

Rand was founded by, among others, the war enthusiast, Air Force General Curtis LeMay, who was the model for the character of Gen. Buck Turgidson in the movie “Dr. Strangelove.” LeMay once stated that he would not be afraid to start a nuclear war with Russia and that spirit would seem to be alive and well at Rand today as they project on to Vladimir Putin our own eagerness for inciting a war.

The particular act of information warfare by Rand is shown in a recent Rand article: “How to Counter Putin’s Subversive War on the West.” The title suggests by its presupposition that Putin is acting in the offensive form of war rather than the defensive form of war. But it is plain to see he is in the defensive form of war when one looks at the numerous provocations and acts of aggression carried out by American officials, such as Assistant Secretary of State Victoria Nuland and General Philip Breedlove, and the U.S. and NATO military buildup on Russia’s borders.

Within this Rand article however can be found no better example of psychological projection than this propagandistic pablum that too many commentators, some witless, some not, will predictably repeat:

“Moscow’s provocative active measures cause foreign investors and international lenders to see higher risks in doing business with Russia. Iran is learning a similar, painful lesson as it persists with harsh anti-Western policies even as nuclear-related sanctions fade. Russia will decide its own priorities. But it should not be surprised if disregard for others’ interests diminishes the international regard it seeks as an influential great power.”

In fact, an objective, dispassionate observation of U.S./Russian policies would show it has been the U.S. carrying out these “provocative active measures” as the instigator, not Russia.

Nevertheless, showing the success that our primary war provocateurs have had in fomenting hostility and possibly war is that less militaristic and bellicose Non-Governmental Organizations (NGOs), ostensibly working for “peace,” have adopted this false propaganda theme uncritically.

The Carnegie Moscow Center Foundation, which includes Russians on its staff, is a prime example. Lately, it has routinely echoed the more provocative and facially false accusations made against Russia by the outright militaristic and war instigating U.S. think tanks. An example is in a recent article of Carnegie, entitled: “Russia and NATO Must Communicate Better.”

It begins: “The risk of outright conflict in Europe is higher than it has been for years and the confrontation between Russia and the West shows no sign of ending. To prevent misunderstandings and dangerous incidents, the two sides must improve their methods of communication.”

Unfortunately, that is now true. But the article’s author suggests throughout that each party, Russia and the U.S./NATO, had an equal hand in the deterioration of relations. He wrote: “The West needs to acknowledge that the standoff with Russia is not merely the result of Russia turning authoritarian, nationalistic, and assertive,” as if Western officials don’t already know that that accusation was only a propaganda theme for their own populations to cover up the West’s aggressiveness.

Suz Tzu wrote that a “sovereign” must know oneself and the enemy. In the case of the U.S. sovereign, the people and their elected, so-called representatives, there is probably no “sovereign” in human history more lacking in self-awareness of their own nation’s behavior toward other nations.

So fanatics like the U.S. Generals whom we’ve seen at the recent political conventions and even worse, General Breedlove, are encouraged to be ever more threatening to the world’s populations.

When that then generates a response from some nation with a tin-pot military relative to our own, with ours paid for by the privileged financial position we’ve put ourselves into post-WWII, our politicians urgently call for even more military spending from the American people to support even more aggression, all in the guise of “national defense.”

Recognizing that must then be coupled with recognition of a U.S. law passed in 2012 providing for military detention of journalists and social activists as the Justice Department conceded in Hedges v. Obama. Add to that what the ACLU recently compelled the U.S. government to reveal in the “Presidential Policy Guidance” and it is plain to see which nation has become most “authoritarian, nationalistic, and assertive.” It is the United States.

The Presidential Policy Guidance “establishes the standard operating procedures for when the United States takes direct action, which refers to lethal and non-lethal uses of force, including capture operations against terrorist targets outside the United States and areas of active hostilities.”

What other nation, besides Israel probably, has a governmental “Regulation” providing for assassinations outside “areas of active hostilities?”

It should readily be evident that it is the U.S. now carrying out the vast majority of provocative active measures and has the disregard for others complained of here. At least for the moment, however, the U.S. can still hide much of its aggression using the vast financial resources provided by the American people to the Defense Department to produce sophisticated propaganda and to bribe foreign officials with foreign aid to look the other way from U.S. provocations.

It is ironic that today, one can learn more about the U.S. military and foreign policy from the Rand Corporation only by reading at least one of its historical documents, “The Operational Code of the Politburo.” This is described as “part of a major effort at RAND to provide insight into the political leadership and foreign policy in the Soviet Union and other communist states; the development of Soviet military strategy and doctrine.”

As this was when the Politburo was allegedly at its height in subverting and subjugating foreign countries as foreign policy, it should be exactly on point in describing current U.S. foreign policy.

That U.S. think tanks, such as Rand and the American Enterprise Institute, put so much effort into promoting war should not come as a surprise when it is considered their funding is provided by the Military Industrial Complex (MIC) which President Eisenhower warned us about. That this U.S. MIC would turn against its own people, the American public, by waging perpetual information war against this domestic target just to enrich their investors, might have been even more than Eisenhower could imagine however.