Kashmir and Palestine: The Story of Two Occupations

The growing pockets of solidarity expressed for Kashmiris are heartening, as is the solidarity for Palestinian struggle.

24 Aug 2016 – The India and Israel alliance has been described as a full-blown romance, but the ongoing siege of Kashmir makes this a bloody affair – covert for years.

India has bought arms from Israel since the 1960s. Indian Prime Minister Narendra Modi is to visit Israel in 2017, marking the 25th anniversary of full diplomatic relations.

The two nations are passionate about their brutal occupations of Kashmir and Palestine. India is one of Israel’s biggest arms exports clients, spending about $10bn over the past decade. Indian police forces have been receiving training in Israel for “anti-terror” operations, which Israeli conducts against Palestinians.

The ongoing unrest in Kashmir

Writing in the Middle East Review of International Affairs in 2004, Harsh Pant, professor of international relations at King’s College London, frames the self-determination struggles in Kashmir and Palestine within a post-9/11 narrative of the “global scourge of Islamist terrorism”.

This terror frame supports the economy of arms trade between India, Israel and the United States. In this story, the aggressive religious nationalisms of Zionism and Hindutva are neutral shared security interests. Kashmiri and Palestinian quests for self-determination are reduced to neighbouring Muslim or Arab states causing unrest.

The current siege of Kashmir by India’s forces follows the killing of Hizbul Mujahideen commander Burhan Wani on July 8.

We live in a time when nation-states overtly commit war crimes, are cheered on by bloodthirsty majoritarian citizens, and literally get away with murder.

Kashmiris came out in thousands to mourn the event. Kashmiri writers and journalists say that the savage response of the Indian state to the popular crowd support for the slain militant was unprecedented.

The pellet gun, a weapon banned in many countries, was used to blind and maim hundreds from a one-year-old child to the elderly.

The dead numbered more than 70, and 6,000 or more were injured. These numbers continue to rise. Yet, Kashmiris continue to protest against the Indian state and call for Azadi (freedom). 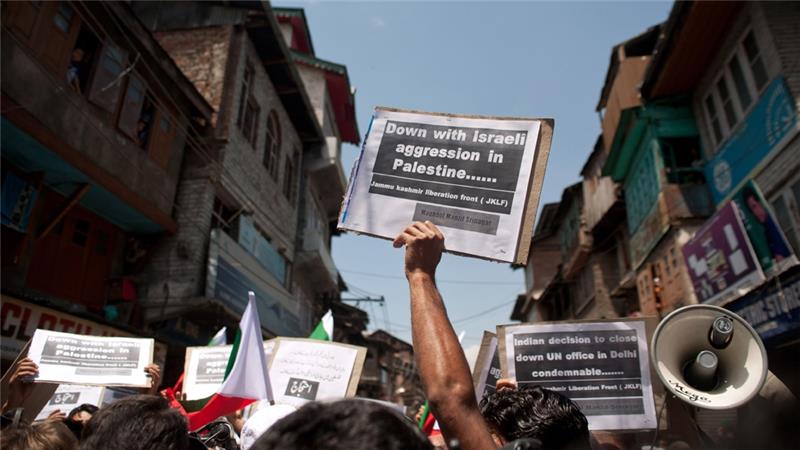 Kashmiri activists hold placards during a protest against Israel’s military operation in Gaza on July 11, 2014, in Srinagar [Getty]

These current events must be placed in a longer context. Since the 1990s, through a decade of armed struggle against the Indian state, state violence in Kashmir has taken its toll.

There are about 500,000 military personnel in the region – in other words, one soldier for 25 civilians. The Jammu and Kashmir Coalition of Civil Society reports more than 70,000 killings, about 10,000 enforced disappearances and 7,000 mass graves (PDF).

Torture, rape, sexual violence, enforced disappearances, and extra-judicial killings are widespread. These human rights violations are intricately linked to the denial of political sovereignty for Kashmiris.

We desperately need to reconsider our West versus non-West understanding of the geography of colonialisms. The years 1947 and 1948 mark the creation of the nation-states of India and Israel. These years scar Kashmiris and Palestinians.

Palestinians have been dispossessed of territory and many forced into exile. Kashmir was handed over from an unpopular ruler without the legitimacy of popular vote to the Indian state on October 26, 1947.

A condition of that accession is the United Nations resolution of 1948 for referendum or plebiscite, never facilitated by the Indian state. Israel and India thus inaugurate the colonial occupations of Palestine and Kashmir.

When is an occupation not an occupation? When it is executed by one of the world’s largest markets? When is a butcher not a butcher? When he is a prime minister; or when he is an ally?

Let’s not forget that Modi was denied a visa to the US in 2005 for his alleged responsibility over the mass murder of Muslims during the Gujarat riots. His nickname, the “Butcher of Gujarat”, comes from that 2002 event. He can now add the title of the “Butcher of Kashmir” to his name – even as that title fits previous Indian prime ministers.

Israeli Prime Minister Benjamin Netanyahu, like his predecessors, can be named the “Butcher of Palestinians” as he presided over the brutal bombing of Gaza in 2014 that killed 2,100 Palestinians, a third of them children.

The Israeli dead listed 66 soldiers and seven civilians. This uneven scale led the UN Inquiry of Gaza to lay the weight of the charge of war crimes on Israel even as they also charged listed Palestinian armed groups.

The US was the sole vote against the UN inquiry, and European countries abstained, as did India. The Gaza bombing was not the first and it is not the last as the violence of occupation continues in Palestine daily in the form of illegal settlements and killings. 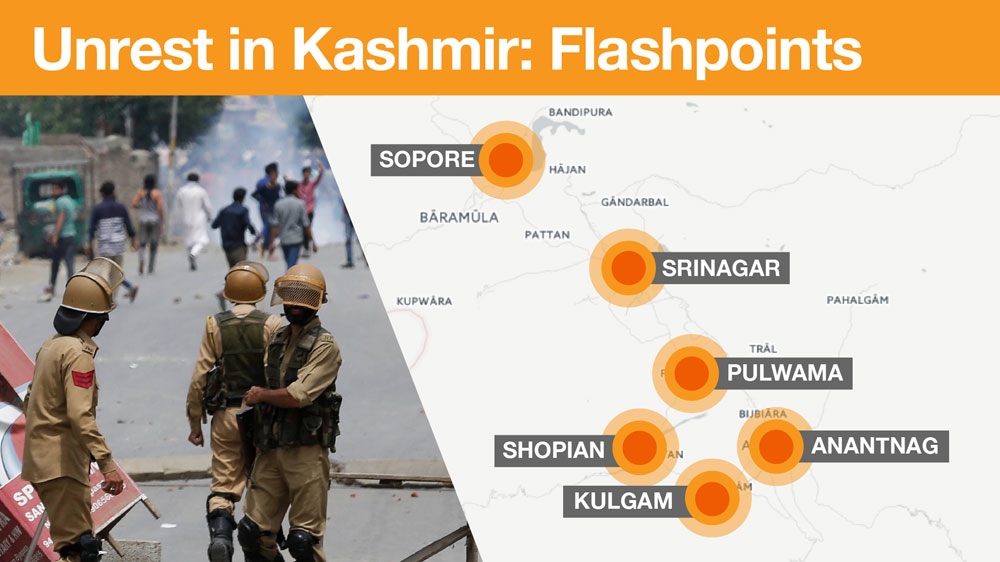 We live in a time when nation-states overtly commit war crimes, are cheered on by bloodthirsty majoritarian citizens, and literally get away with murder.

The word democracy glitters like fool’s gold on the tongues of world leaders. Human rights regimes seem toothless in the face of the bold barbarisms of nation-states invested in repressing democracy, and need reform if they are to deliver justice.

And so transnational solidarity and activism are urgent when almost every nation-state seems rogue.

The small but growing pockets of solidarity expressed for Kashmiris are heartening, as is the international solidarity for Palestinian struggle.

Joining the dots between the occupations of Kashmir and Palestine shows the need for a greater solidarity between these two sovereignty struggles.

Goldie Osuri is associate professor of sociology at the University of Warwick, UK. She is the author of Religious Freedom in India: Sovereignty and (Anti) Conversion.

4 Responses to “Kashmir and Palestine: The Story of Two Occupations”