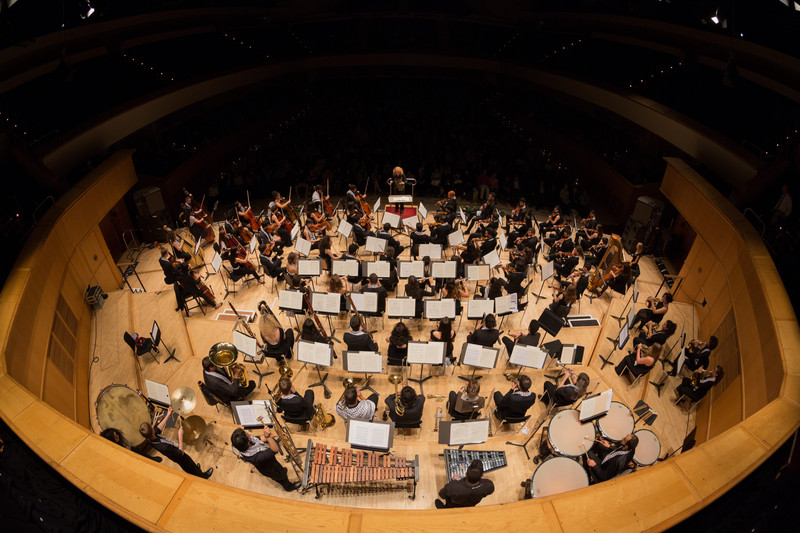 29 Jul 2016 – True to form, the rain is hammering down on Glasgow. In the foyer of the Royal Concert Hall young men in sharp black, wearing scarves bearing the unmistakable checkered print of the Palestinian kuffiyeh, are prowling around moodily. One detects pre-performance nerves.

This is the second night of the Palestine Youth Orchestra’s six-night debut tour of Britain. On the first night of their tour, the orchestra filled the concert hall in Perth; their show in Glasgow’s monumental concert hall sold out. The remaining tour stops include Leeds, Birmingham, Cardiff and finally London.

If there were indeed pre-show nerves, they weren’t necessary: the Palestine Youth Orchestra received a full standing ovation. Not even greats like the St. Petersburg Philharmonic get that when performing in Scotland.

The Palestine Youth Orchestra know their audience. Their diverse program showcased their skills, but also allowed for the fact that, as a newcomer to the international scene, ticket sales will for the moment rely as much on solidarity as on attendees with a passion for classical music. With a range of different styles and feels, the ensemble’s selections were clearly – and successfully – intended to appeal to all tastes.

First up was the Leonore Overture No.3 from Beethoven’s only opera, Fidelio. As Layth Sidiq, the orchestra’s skilled concertmaster, pointed out in one of the many short introductions and commentaries made by different members during the evening, the opera’s plot resonates strongly with the group of young Palestinians, as it tells the story of a young woman disguising herself to free her husband from political prison.

Following this, the orchestra performed with vocal soloist Nai Barghouti three 20th-century Arabic songs: two written by the Lebanese Rahbani brothers for the great singer Fayrouz, and a third by Zakariyya Ahmad, with lyrics from a work by Egyptian poet Bayram al-Tunisi, originally composed for the Egyptian diva Umm Kulthum.

Up-and-coming star Barghouti – born in Akka, a graduate of the Edward Said National Conservatory of Music, and a composer and flautist as well as singer – has a stunning voice. With deep, rich tones beyond her years, she doesn’t try to emulate Fayrouz or Umm Kulthum, but makes these songs her own with a more naturalistic style and open, frank delivery.

The first half of the performance closed with “Metal,” a short piece by contemporary composer Graham Fitkin, a celebratory work inspired by modern British classical music. This bold, pacey, upbeat work is the result of an open competition held by the Palestine Youth Orchestra in 2015.

Chosen from more than 30 entries, Fitkin’s work highlights the orchestra’s tightness and sense of timing; with a lively, almost pop-like core, the pronounced percussion needs to be spot-on to sound right, rather than random. Fortunately, it was.

The second half of the program consisted of an international touring orchestra favorite, Mussorgsky’s Picture at an Exhibition. A series of vignettes responding to paintings by the composer’s friend Victor Hartmann, interspersed with a Promenade theme which represents the composer walking between the images, it is a varied piece which showcases the talents – or, in unlucky cases, failings – of different soloists and sections of the orchestra.

The Palestine Youth Orchestra tackles Mussorgsky’s work beautifully, alternating between the limpid, moving Promenade and the various “pictures,” ranging from the lively, even funny “Ballet of the Unhatched Chicks in their Shells” to the menacing “Catacombs.”

When listening to this skilled orchestra, it’s easy to forget that the musicians’ ages range from 26 to just 14, and that their very presence in one concert hall, on one night, involves overcoming huge political and logistical challenges.

Although the Palestine Youth Orchestra has sprung from the Edward Said National Conservatory of Music, which has branches in the occupied West Bank and Gaza Strip, the orchestra’s members are spread across historic Palestine, including within the State of Israel.

Indeed, two musicians were unable to join this tour, despite being scheduled to perform: from Gaza, they were denied exit by Israel.

Their far-flung origins, and the reality of Israel’s severe control over Palestinian movement, means that the players only get to rehearse as a full orchestra when on tour. The program for this tour was honed in Britain, workshopped with tutors at the Royal Conservatoire of Scotland, and finalized alongside guest musicians from the UK.

The backgrounds of many of the orchestra’s members show the additional political obstacles it faces. Violist Omar Saad, for instance, is a young Druze citizen of Israel whose musical talents have often been overshadowed by the many jail terms he has been sentenced to since the age of 17 for refusing to serve in the Israeli military.

Omar’s brother Mostafa, who plays violin with the Palestine Youth Orchestra, also faces jail time for refusing to be conscripted.

Some members of the orchestra hail from refugee camps in the West Bank and the wider Middle East.

Others are citizens of Israel who grew up detached from fellow Palestinian musicians; flautist Nardin Ballan, for instance, was raised in Nazareth and studied and performed in Tel Aviv with Israeli musicians.

According to a spokesperson with PalMusic, the Palestine Youth Orchestra’s representative organization in Britain, Ballan’s first-ever visits to the West Bank were with the orchestra, and have been “life-changing” for her.

Ultimately, though, the Palestine Youth Orchestra was formed to play music, and in Glasgow, they overcame all their challenges to do so wonderfully well. To see this orchestra perform is not an act of solidarity, it is a musical treat.

Sarah Irving is author of a Biography of Leila Khaled, of the Bradt Guide to Palestine, and is co-editor of A Bird is not a Stone.