A Pipeline Fight and America’s Dark Past 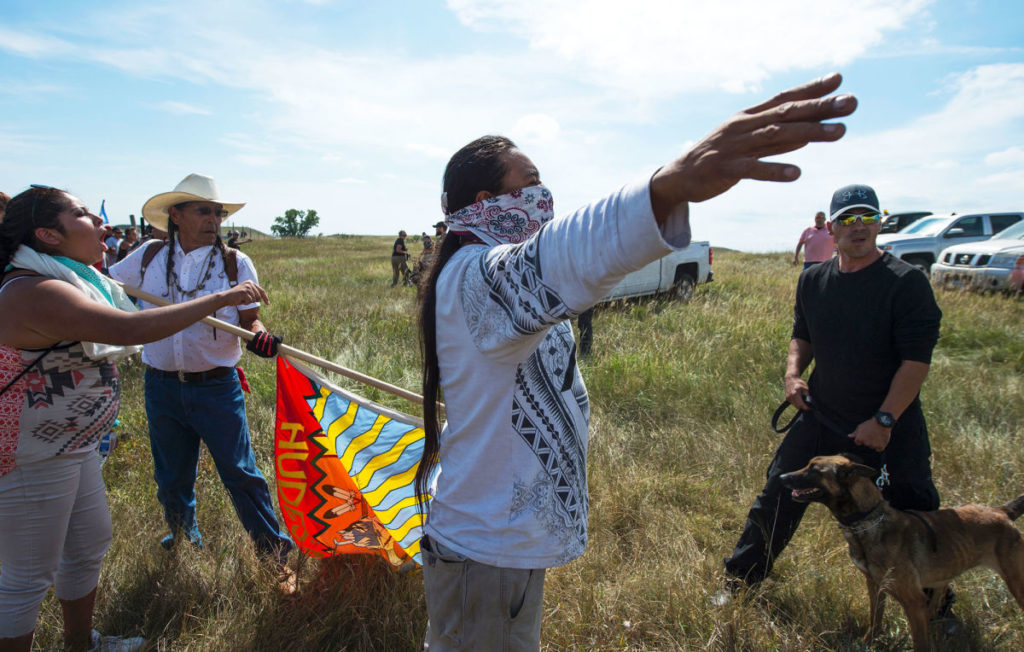 6 Sep 2016 – This week, thousands of Native Americans, from more than a hundred tribes, have camped out on the Standing Rock Sioux reservation, which straddles the border between the Dakotas, along the Missouri River. What began as a slow trickle of people a month ago is now an increasingly angry flood. They’re there to protest plans for a proposed oil pipeline that they say would contaminate the reservation’s water; in fact, they’re calling themselves protectors, not protesters.

Their foe, most directly, is the federal government, in particular the U.S. Army Corps of Engineers, which has approved a path for the pipeline across the Missouri under a “fast track” option called Permit 12. That’s one reason the Dakota Access Pipeline, as it’s known, hasn’t received the attention that, say, the Keystone XL Pipeline did, even though the pipe is about the same length. Originally, the pipeline was supposed to cross the Missouri near Bismarck, but authorities worried that an oil spill there would have wrecked the state capital’s drinking water. So they moved the crossing to half a mile from the reservation, across land that was taken from the tribe in 1958, without their consent. The tribe says the government hasn’t done the required consultation with them—if it had, it would have learned that building the pipeline there would require digging up sacred spots and old burial grounds.

In fact, the blade of a bulldozer cut through some of those burial grounds on Saturday—during a holiday weekend, days before a federal judge is supposed to rule on an emergency petition filed by the tribe which would slow the project down, and immediately after the tribe identified the burial grounds’ locations in a filing to the court. The company building the pipe—Energy Transfer Partners—has already constructed more than half the pipeline, which, when completed, would stretch from Stanley, North Dakota, near the Canadian border, to Patoka, in southern Illinois. It apparently wanted to create facts on the ground in North Dakota—wanted to do so badly enough, it seems, that it was willing to employ a private security force, which used dogs to confront the Native Americans who tried to prevent the desecration of old graves. Tribal officials said that the dogs bit six protesters, including a small child. (The company did not respond to requests for comment, but had previously stated that demonstrators “attacked” their workers and the guard dogs. It has stressed in the past that it has been “constructing this pipeline in accordance with applicable laws, and the local, state and federal permits and approvals we have received.”)

Pictures from that confrontation recall pictures from Birmingham circa 1963. But the historical parallels here run much deeper—they run to the original sins of this nation. The reservation, of course, is where the Native Americans were told to live when the vast lands they ranged were taken by others. The Great Sioux Reservation, formed in the eighteen-sixties, shrunk again and again—in 1980, a federal court said, of the whole sad story, “a more ripe and rank case of dishonorable dealings will never, in all probability, be found in our history.” In the nineteen-fifties and early sixties, the Army Corps of Engineers—the same Army Corps now approving the pipeline—built five large dams along the Missouri, forcing Indian villages to relocate. More than two hundred thousand acres disappeared beneath the water.

Sioux history, and Native American history, is filled with one massacre and battle after another. Most of us have never heard of some of those encounters—the Whitestone, or Inyan Ska, massacre, for instance, not far from the present encampment, where at least three hundred Sioux lost their lives when Brigadier General Alfred Sully attacked men, women, and children feasting after a buffalo hunt. Some we do remember, albeit differently: one man in the camp last week said it was the most diverse gathering of Native Americans “since the Battle of Greasy Grass,” known to the white world as Little Bighorn. In other words, America’s shameful history with its native inhabitants is echoing across these riverbanks this late summer. 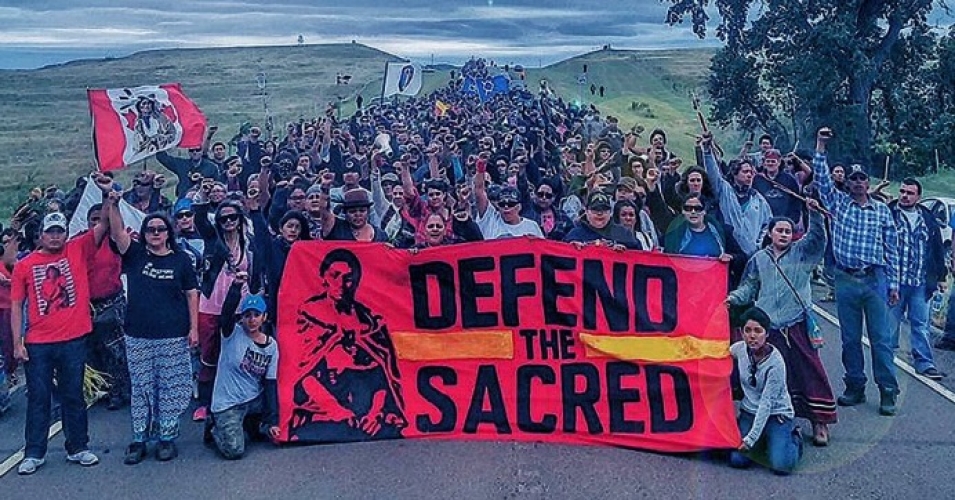 “The events at Standing Rock also allow Americans to realize who some of the nation’s most important leaders really are,” writes McKibben. “The fight for environmental sanity—against pipelines and coal ports and other fossil-fuel infrastructure—has increasingly been led by Native Americans, many of whom are in that Dakota camp today.” (Photo: Twitpic/@350)

“The U.S. government is wiping out our most important cultural and spiritual areas,” LaDonna Brave Bull Allard, whose great-great grandmother survived the Whitestone Massacre, wrote this week. “And as it erases our footprint from the world, it erases us as a people. These sites must be protected, or our world will end, it is that simple. Our young people have a right to know who they are. They have a right to language, to culture, to tradition. The way they learn these things is through connection to our lands and our history.”

The protests have been peaceful and nonviolent. (Some members of the climate advocacy group 350.org, which I founded, are working at the Dakota camp in supporting roles.) And yet the local sheriff told reporters that he’d heard rumors of pipe bombs; it turned out he’d heard rumors about ceremonial peace pipes. After Saturday’s encounter with the guard dogs, the same sheriff said that security personnel were reacting to demonstrators who had “crossed on to private property” and attacked them with “flag poles.” He did not respond to requests for further comment.

Young people on the reservation organized a run across the country this summer to deliver more than a hundred thousand petition signatures to the President asking him to stop the pipeline. They weren’t received at the White House—disappointing, since Obama had actually visited the reservation in 2014. “My Administration is determined to partner with tribes,” he told them then, but so far he’s made no public statement on the Dakota Access pipeline.

All of which is sad, because this case offers the U.S. government the chance to make at least small amends for some of the darkest parts of its official history—to demonstrate that it has absorbed at least a few small lessons from that past.

The events at Standing Rock also allow Americans to realize who some of the nation’s most important leaders really are. The fight for environmental sanity—against pipelines and coal ports and other fossil-fuel infrastructure—has increasingly been led by Native Americans, many of whom are in that Dakota camp today. They speak with real authority—no one else has lived on this continent for the longterm. They see the nation’s history more clearly than anyone else, and its possible future as well. For once, after all these centuries, it’s time to look through their eyes. History offers us no chances to completely erase our mistakes. Occasionally, though, we do get a chance to show we learned something.

Bill McKibben, a former New Yorker staff writer, is the founder of the grassroots climate campaign 350.org and the Schumann Distinguished Scholar in environmental studies at Middlebury College.