A vast new study finds there are 70 percent fewer wild animals sharing the earth with us than there were in 1970. 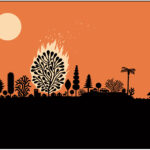 Our Final Warning: Six Degrees of Climate Emergency, by Mark Lynas, London: 4th Estate, 372 pp. – So now we have some sense of what it’s like: a global-scale crisis that disrupts everything–shopping for food, holding a wedding, going to work, seeing your parents. Will you ever ride a subway again, or take a plane? The upheaval that has been caused by Covid-19 is also very much a harbinger of global warming. 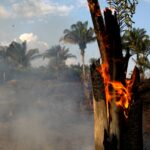 22 Aug 2019 – São Paulo is the largest city in the western hemisphere — and Tuesday [20 Aug] it was also the most hellish. Around two in the afternoon, the sky turned suddenly and ominously dark, almost as if the sun had been eclipsed by a pall of smoke from the burning rainforests of Brazil’s Amazon. The new Brazilian leader called himself “Captain Chainsaw” and mocked environmentalists who feared his pro-clearance policies could decimate the Amazon.

The Victory at Standing Rock Could Mark a Turning Point
Bill McKibben – The Guardian, 12 Dec 2016

4 Dec 2016 – The news that the US federal government has refused to issue the permit needed for an energy company to run a pipeline under the Missouri river means many things – including that indigenous activists have won a smashing victory, one that shows what nonviolent unity can accomplish. There are lessons here as we enter a challenging new age.

A Pipeline Fight and America’s Dark Past
Bill McKibben – The New Yorker, 12 Sep 2016

6 Sep 2016 – This week, thousands of Native Americans, from more than a hundred tribes, have camped out on the Standing Rock Sioux reservation, which straddles the border between the Dakotas, along the Missouri River. What began as a slow trickle of people a month ago is now an increasingly angry flood. They’re there to protest plans for a proposed oil pipeline that they say would contaminate the reservation’s water; in fact, they’re calling themselves protectors, not protesters.

A World at War: We’re under Attack from Climate Change—And Our only Hope Is to Mobilize like We Did in WWII
Bill McKibben – New Republic, 22 Aug 2016

15 Aug 2016 – Enemy forces have seized huge swaths of territory; with each passing week, another 22,000 square miles of Arctic ice disappears. Experts dispatched to the battlefield in July saw little cause for hope, especially since this siege is one of the oldest fronts in the war. “In 30 years, the area has shrunk approximately by half,” said a scientist who examined the onslaught. “There doesn’t seem anything able to stop this.”

5 Mar 2016 – Thursday [3 Mar], while the nation debated the relative size of Republican genitalia, something truly awful happened. Across the northern hemisphere, the temperature, if only for a few hours, apparently crossed a line: it was more than two degrees Celsius above “normal” for the first time in recorded history and likely for the first time in the course of human civilization.

New documents and interviews show that Exxon, now ExxonMobil, knew its main product would heat up the planet disastrously, but it did not prevent it from spending decades to organize the campaigns of disinformation and denial that have slowed – perhaps fatally – the planet’s response to global warming.

It was two years before the first Earth Day in 1970 when Garrett Hardin penned the famous essay “Tragedy of the Commons.” Since no one owned the oceans or the atmosphere, we would inevitably fish and pollute them into oblivion. We were witnessing a tragedy whose script could not be revised. A decade later his argument fit the privatizing mood of the Reagan years. No one owns the sky or the sea? Well, then, let’s sell them! The race was on to privatize everything, from fishing rights to kids’ playgrounds, on the theory that this was the only way to manage them well. Society was the problem, the individual was the solution.

Our Lives Are under Threat from Some of the Most Powerful and Richest Entities — Here’s How We Can Fight Back and Win
Naomi Klein and Bill McKibben - AlterNet, 11 Apr 2011

To us, the lesson is pretty clear. Since we’re never going to have as much money as the fossil fuel industry, we need to rebuild the kind of mass movement that marked 1970: bodies, passion, and creativity are the currencies we can compete in. It’s not impossible.

Everything Is Negotiable, Except with Nature
Bill McKibben - TomDispatch, 20 Dec 2010

You Can’t Bargain About Global Warming with Chemistry and Physics

We’re Hot as Hell and We’re Not Going to Take It Any More
Bill McKibben - TomDispatch, 9 Aug 2010

Three Steps to Establish a Politics of Global Warming. Try to fit these facts together:

Ah, the party planner’s problem. You send out an invitation, and what happens if they all say yes? I’m just back from today’s [Mar 2] magnificent civil disobedience outside the Capitol power plant. It began around 1 p.m., with the morning’s snow still swirling—and out of the snow hundreds and then thousands of people arriving, […]