The Amazon Rainforests Are on Fire – Brazil’s Trump-Like President, Jair Bolsonaro, Is to Blame

The new Brazilian leader called himself “Captain Chainsaw” and mocked environmentalists who feared his pro-clearance policies could decimate the Amazon. 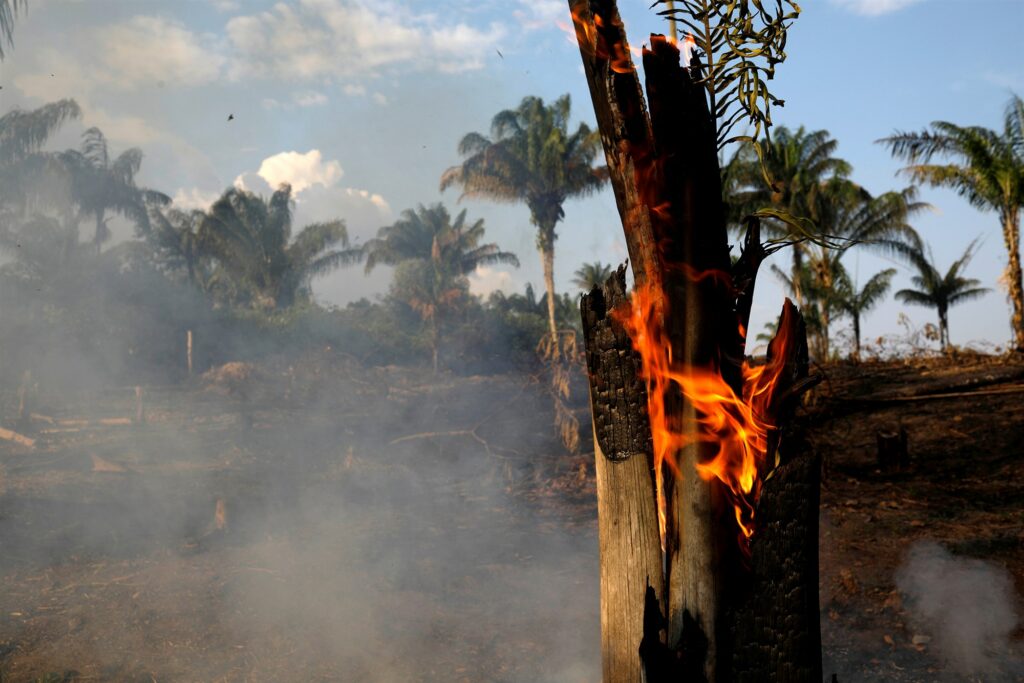 A tract of Amazon jungle is seen burning as it is being cleared by loggers and farmers in Iranduba, Amazonas state, Brazil on Aug. 20, 2019. Bruno Kelly / Reuters

22 Aug 2019 – São Paulo is the largest city in the western hemisphere — and Tuesday [20 Aug] it was also the most hellish. Around two in the afternoon, the sky turned suddenly and ominously dark, almost as if the sun had been eclipsed. And it had — not by the moon, but by a pall of smoke from the burning rainforests of Brazil’s Amazon.

It’s not often you can pinpoint one person as the culprit for something on this scale, but the midday darkness is the direct result of the election of Jair Bolsonaro to the country’s presidency last year. Bolsonaro, who has told people, supposedly ironically, to call him “Captain Chainsaw,” campaigned on the theory that his country’s economic development had been limited by the world’s affection for the Amazon, and he made clear that those who wanted to cut it down had little to fear from his administration. He even fired the head of the federal agency tasked with monitoring by satellite the extent of deforestation, when he found that deforestation was increasing.

Related: Who is Jair Bolsonaro and why is he more dangerous than Trump?

The predictable result was that people began logging and burning to clear land — sometimes they want timber and sometimes they want pasture on which they can run cattle or grow soy. As of Tuesday, the satellites were showing a new fire erupting somewhere across the landscape every minute. Not because lightning was striking, but because greed and corruption were striking.

This is terrifying news for Brazilians who have to breathe the smoke. And it’s terrifying for the whole planet.

For one thing, burning a forest sends a plume of carbon into the atmosphere, exacerbating global warming. We’re already dealing this summer with massive wildfires in Alaska and Siberia and even on much-coveted Greenland, where peat deposits are apparently blazing amid record temperatures. Another region of the world in flames doesn’t help.

For another, the cattle that pasture on those newly exposed soils or eat the soybeans grown on them will send plumes of methane into the atmosphere; their belching is a not unimportant fraction of the greenhouse gases heating the planet. (One more good argument for eating lower on the food chain, though, at this point, individual decisions probably won’t come fast enough to make a sufficient difference).

And finally, when you cut down a forest, you remove the most effective means of scrubbing those greenhouse gases from the atmosphere. The Amazon is often colloquially referred to as the “lungs of the planet,” and the trees that inhabit it breathe in vast amounts of the carbon dioxide that we produce, returning oxygen in its place. Hacking away at those lungs is dangerous for any organism, the earth included.

The tragedy here is that, for several decades, Brazil had shown real dedication to managing the Amazon with some concern for the planet’s future. In the 1980s, as scientists first began to understand the crucial importance of the world’s biggest forest, they despaired about whether the country could slow its deforestation and many of those who tried, like the famous rubber tapper Chico Mendes, were murdered for their pains.

But with financial support from the rest of the world, Brazil began to protect the vast Amazon. Reserves were set aside for indigenous people; the trade in illegally logged hardwoods was controlled; and the rate of clearing dropped sharply. By some measures, Brazil did more to improve the chances of controlling climate change than any nation on earth.

There’s been some backsliding in recent years, but it took Bolsonaro to really unravel the skein of protections. His election depended on support from ranchers and loggers, and he’s taken a Trumpian pleasure in plundering the Amazon. The forest was “like a virgin that every pervert from the outside wants,” he said, and therefore Brazilians should cut it down before others had the chance. When a reporter asked about the spiking deforestation, he told him that people should simply “poop every other day.” When the European nations who have given hundreds of millions of dollars to protect the Amazon protested the fires, he tweeted out nonsense about German forests and false pictures of Norwegian whaling.

It’s not clear that international outrage will have any effect on his conduct; he seems, again like President Donald Trump, to relish the scorn. But Brazil is in the process of trying to wrap up new trade agreements with the rest of the world, which gives other nations power they should use. And at a certain point — like Chinese and Indian leaders before him — Bolsonaro will doubtless find that poisoning the air of his big cities is a recipe for sliding popularity.

But that needs to happen soon. In a world already on the brink of massive warming from fossil fuel combustion, the loss of the greatest carbon sink on the planet is simply too much to bear. Brazil has a responsibility not only to its own citizens but also to the entire earth. Bolsonaro’s tantrums, like Trump’s withdrawal from the Paris accords, damages not just his own nation for a few years; it also imperils the entire earth for millennia to come.

Bill McKibben is the founder of the global climate campaign 350.org and the Schumann Distinguished Scholar in environmental studies at Middlebury College. His most recent book is Falter: Has the Human Game Begun to Play Itself Out?