The coup-imposed president is already barred from running for public office; now he is under investigation for illegally soliciting campaign donations. 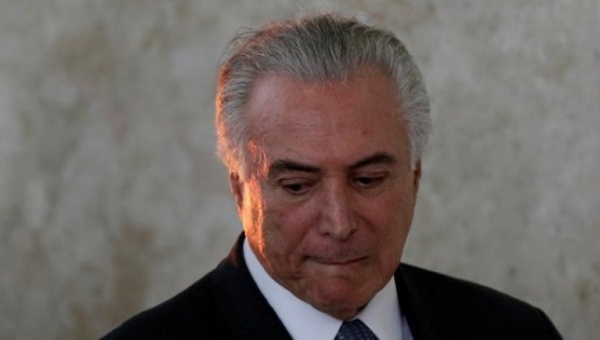 The widely unpopular president has been accused by the former boss of Brazil’s largest oil transportation company to have illegally requested campaign donations in 2012.

RELATED: Rousseff Ousted over Her Opposition to Neoliberalism: Temer

Gabriel Chalita ran the 2012 campaign and at the time was a member of Temer’s centrist party, the Brazilian Democratic Movement Party, or PMDB. Temer, however, has denied any wrongdoing. Senate President Renan Calheiros, also a member of the PMDB, was named in the probe by Supreme Court Judge Teori Zavascki.

Temer and other political figures named in the probe will have charges pressed against them if prosecutors can find enough evident in their preliminary investigation.

Over 100 people have so far been arrested for their alleged involvement in the scandal, including dozens of other high profile executives. The investiagtion was launched in 2014 after investigators started to note billions of Brazilian reais being moved across the world.

Temer became Brazil’s interim president after leftist President Dilma Rousseff was ousted from office in what many have described as a parliamentary coup. Temer’s all white male cabinet has continually pursued a number of neoliberal austerity measures in the face of Brazil’s worst economic recession in years.

Temer and the PMDB have been widely unpopular as a result of Rousseff’s ousting and widespread austerity measures, which has been met by strong opposition from around the country with a number of protests staged calling for his removal.

The austerity measures include a spending freeze of social programs for 20 years and plans to privatize 32 major resource and infrastructure projects. Protesters and unions say that the changes will remove basic protections for Brazilian workers and exacerbate poverty and inequality.

Temer is currently allowed to hold the presidency until the end of 2018 when elections are due, but he remains barred from running for any public office for eight years after he was found guilty of electoral violations by spending more than the legally allowed amount of his own money on this own campaign.