Can the Growing Number of Government-Rebel Reconciliation Agreements End the Bloodshed in Syria?

September 8, 2016 was a long hot tense day at the border-crossing at al-Moaddamiyeh, at town roughly ten kilometers southwest of Damascus. Approximately 135 Syrian soldiers and 35 volunteers from the Syrian Arab Red Crescent Society (SARCS) evacuated more than 300,  mainly civilians, who have spent the past more than four years trapped, two years in Daraya and nearly three next door in al-Moaddamiyeh. Several reporting that sometimes they had nothing to eat but grass.

The evacuation was the latest one agreed to between rebel forces and the Syrian government and implemented according to President Assad’s Amnesty Decree no. 15 issued on July 28, 2016 . Another 700 were evacuated from nearby Daraya per a similar agreement achieved on August 25. At least half of dozen similar evacuations from rebel areas are reportedly being negotiated between rebels and the government. 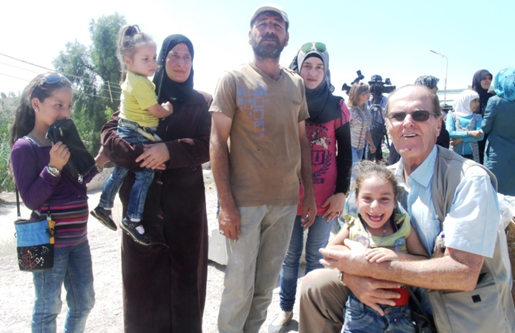 The gentleman above with his family of four daughters fought the Syrian army hard for nearly five years. While apprehensive to say the least, he claims to be a moderate and that Islam had nothing to do with his participation in the fighting. He is willing to give up his fight, board a bus to the Harjalleh area settlement facility south of Damascus and work on getting his children in school when classes start late this month. If he succeeds it will be for the first time in four years any of his lovely children have attended school. (Photo: Paola Nurnberg 9/8/2016).

Many of the more than 303 evacuees from the rebel area, a majority being young children who appeared weak, frightened and dazed, waited nearly four to five hours or more to board the waiting buses for the makeshift center set up for them in Harjalleh area in Damascus countryside where in addition to being housed, they will receive medical care and given relief supplies. They will be free to go and come to their new shelters as they wish. 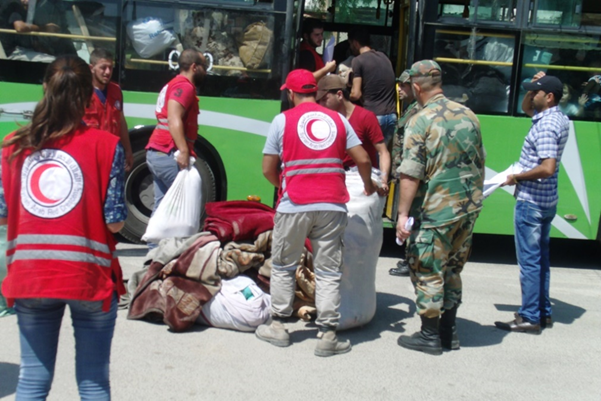 Among those leaving al-Moaddamiyeh were 62 rebel fighters, a few of whom this observer spoke freely with and who opted to settle their legal status with the government per decree No. 15, noted above. The ceasefire is a bitter landmark for many of the young men pictured below. Some protested as early as 2011 and have fought in the “revolution” until now. 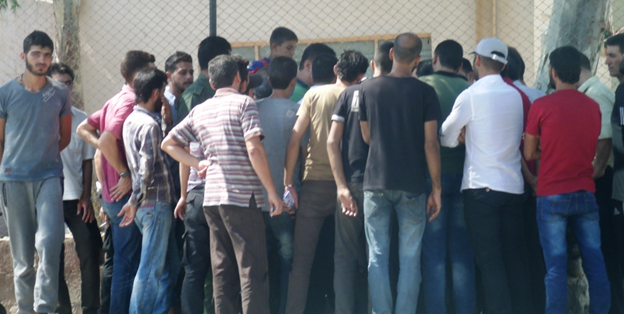 Above are rebel fighters who departed al-Moaddamiyeh on 9/8/2016 having their names registered and checked by the Syrian army. The rebels are promised a ‘clean slate’ with the government “in most cases.” When asked what that language meant the observer was advised: “If we learn that any of them organized a car bombing or something similar, we will continue to have a problem with him and he will face justice.” (Photo: Franklin Lamb 9/8/2016) 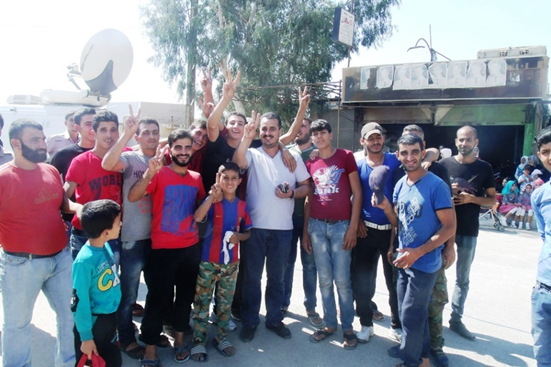 Many of the “former rebels” spoke freely with this observer and appeared ready to give up their five year armed struggle. Some of them embraced soldiers who they had fought hard for the past several years and who generally reciprocated goodwill, often with hugs. All appeared to agree, “What is past is past. Let’s try to forget about it for the time being and rebuild Syria!” (Photo: Franklin Lamb 9/2016)

The Governor of Damascus Countryside Alaa Munir Ibrahim explained to this observer that the process of local reconciliations has notably accelerated in several Syrian areas, and that like the town of al-Moaddamiyeh, several other cities and towns will witness reconciliation agreements soon. He explained that in the Damascus Countryside governorate a committee has been  formed to implement the government’s plan to rebuild  Daraya, noting that necessary plans are being drawn up are to begin reconstruction as soon as possible.

There are to be expected some skeptics among the evacuating rebels and two spoke opening to this observer about their qualms. One point stressed is whether they can trust the government to honor the agreement. They mentioned that friends of theirs who left the al-Wair district of Homs during the December 2015 deal have not been heard from since although they were promised safe passage to join rebels in Idlib Governorate. This claim is difficult to verify but government assurances given to the evacuating residents seem to be taken at face value by those boarding SARCS organized buses at al-Moaddamiyeh.

In addition, one senses that there is a feeling by supporters of both sides that no one is winning this war, although the government does exhibit recent momentum–yet it shifts from time to time.

One senses  among those leaving al-Moaddamiyeh this weekend a will to let things calms down, partly due to exhaustion and not being sure of a military solution despite widespread social media posturing notwithstanding.  This feeling at least until they see if a serious transitional process can put agreed and put in place, perhaps under UN auspices.

This observer senses, after talking with army and rebel guys that local ceasefires may well be the most effective way of gradually bringing peace to a country where more approximately half a million people have been killed.

It is very much in the interest of the Syrian government to stick with these amnesty-truce deals because every evacuation is a government victory, a defeat for the opposition, and means the government reclaims more geography. In this month’s two cases of Daraya and al-Moaddamiyeh, both positive achievements bookend its Damascus based seat of power with the half a dozen or more additional ceasefires and evacuations reported to this observer as currently being actively negotiated.

The Daraya-al Moaddamiyeh truce models may be the best way forward to begin to end a devastating war and to ease the increasing suffering of civilians, especially children, who have paid an unbelievably heavy price. Time will tell, but that precious commodity is fast running out with respect to whether Syria, not to mention Iraq, Yemen, Afghanistan and Lebanon can be put back together again, so thoroughly damaged are they  by  warfare and/or by deeply poisonous Sunni-Shia sectarian conflict.

This, as collaboration between al-Qaida elements, (IS) elements, and others are deepening despite some recent geographical losses.

Franklin Lamb volunteers with the Lebanon, France, and USA based Meals for Syrian Refugee Children Lebanon (MSRCL) which seeks to provide hot nutritional meals to Syrian and other refugee children in Lebanon. http://mealsforsyrianrefugeechildrenlebanon.com . He is reachable c/o fplamb@gmail.com].

Anticopyright: Editorials and articles originated on TMS may be freely reprinted, disseminated, translated and used as background material, provided an acknowledgement and link to the source, TMS: Can the Growing Number of Government-Rebel Reconciliation Agreements End the Bloodshed in Syria?, is included. Thank you.