CEOs Can Now Be Prosecuted Like War Criminals at The Hague

The court’s new focus on land grabbing and environmental destruction could help put a dent in corporate impunity.

The Hague court made explicit references to widening its approach to include land grabbing, which has allowed private corporations, with the help of governments, to take over large areas of foreign land to exploit natural resources. It will also prosecute for environmental destruction.

“Chasing communities off their land and trashing the environment has become an accepted way of doing business in many resource-rich yet cash-poor countries,” said Gillian Caldwell, executive director at Global Witness. “Company bosses and politicians complicit in violently seizing land, razing tropical forests or poisoning water sources could soon find themselves standing trial in the Hague alongside war criminals and dictators. The ICC’s interest could help improve the lives of millions of people and protect critical ecosystems.”

The violence surrounding environmental conflicts also often leaves corpses in its wake. In 2015, more than three people were murdered each week attempting to defend their lands from land grabbing, according to Global Witness. The group estimated that an area the size of Germany has been leased to international investors in developing countries since 2000.

The court’s decision was sparked by a case filed by a group of Cambodians who alleged that authorities, including the government, military, police and the courts, have been complicit in land grabbing since 2002, which has led to the forced eviction of more than 300,000 people. International legal experts say the court’s widened focus could potentially open up criminal prosecutions for climate change. 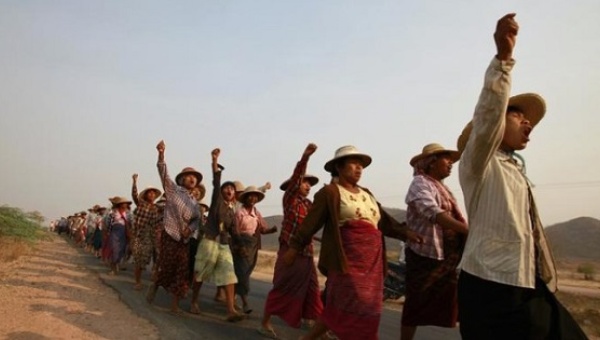 Villagers protest after their land was seized to allow for the expansion of a copper mine in Sagaing Division, March 13, 2013. | Photo: Reuters

The ICC was set up in 2002 by governments with the intention of prosecuting individuals for serious crimes where many developing and unstable countries lack the mechanisms to carry out their own trials. Critics however have said that the ICC lacks teeth because it is pinned on the cooperation of states to bring suspects to trial.

Importantly, a number of powerful states一many the home of powerful international corporations一are not under the jurisdiction of the ICC. China, India, Russia, Cuba and Indonesia, have not signed or ratified the Rome Statute which established the ICC. The U.S., Israel and Sudan stated that they do not intend to become of the court in the future.