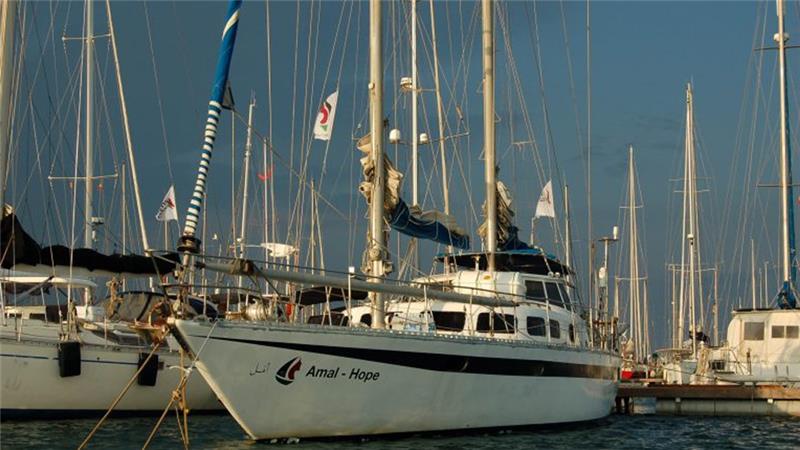 Two boats, Amal and Zaytouna, will have 11 women on board each [Courtesy: Rumbo a Gaza]

15 Sep 2016 – A new flotilla of international activists has left for the Gaza Strip from the Spanish city of Barcelona, hoping to break a nearly decade-long Israeli blockade.

Two sailing boats, Amal and Zaytouna, with 11 women on board each, sailed off on Wednesday evening under the banner “The Women’s Boat to Gaza”.

“We are carrying food and medicine on the boat that will be distributed to Gazans upon arrival,” Zohar Chamberlain Regev, a spokeswoman of the initiative, told Al Jazeera.

“But mainly we are carrying a message of hope and solidarity, because we think Gazans want that most of all.”

She said she had high hopes that the flotilla would not be stopped by the Israeli navy and reach the destination.

“We know that we are not a threat to Israel. We are not heading to an Israeli port so they have no reason to stop us,” she said.

The blockade has been in place since 2007 when Hamas took control of Gaza.

Last time the Women’s Boat to Gaza attempted to deliver aid to the territory in 2015, the Israeli navy boarded and took over its vessel, Marianne. The boat was taken to the Israeli city of Ashdod.

In 2010, a similar bid to break the blockade by a Turkish flotilla resulted in the killing of 10 activists by Israeli commandos, and caused a diplomatic spat between Ankara and Israel.

UN Secretary-General Ban Ki-moon recently described the blockade as “a collective punishment for which there must be accountability.

“The closure of Gaza suffocates its people, stifles its economy and impedes reconstruction efforts,” he said during a visit to the Palestinian territory in June.