Historic Peace Accord for Colombia Is Signed in Havana 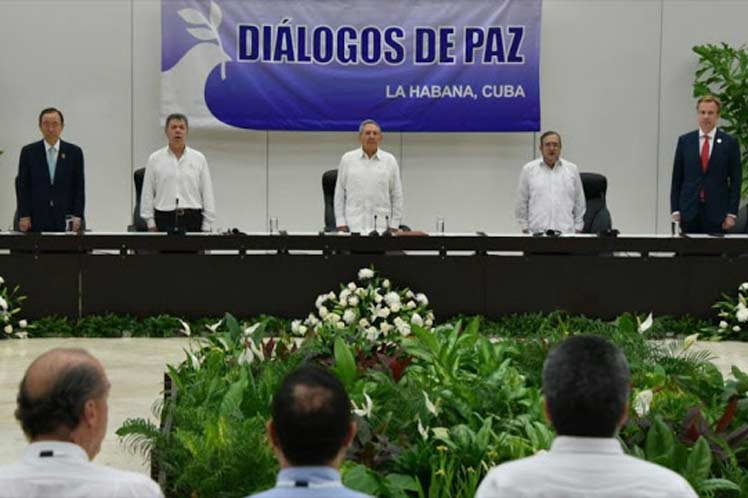 25 Aug 2016 – After nearly four years of talks, delegations from the FARC-EP and the Colombian government have signed a final agreement in Havana for a political solution to the armed conflict in the South American country.

Signed yesterday by the representatives of the insurgent Revolutionary Armed Forces of Colombia-People’s Army (FARC-EP) and the Colombian government, the document includes a set of initiatives that contribute to the implementation of Colombian constitutional rights and ensure a stable and lasting peace.

The initiative will mean an end to the enormous suffering caused by the conflict and will open a new chapter in the history of the nation and will begin a transition period which will allow territorial integration, social inclusion and the strengthening of democracy, the two sides said.

Item one of the agreement concerns comprehensive rural reform, which will contribute to structural transformation of the countryside; item two deals with the democratic enlargement that will allow the emergence of new forces onto the political scene in order to enrich the debate on major national issues.

Item three contains the bilateral and definitive ceasefire and hostilities agreement as well as disarmament; item four analyzes the solution to the problem of illegal drugs; item five concerns the victims; and item six deals with the mechanisms for implementation and verification.

The heads of the government delegation, Humberto de la Calle, and the FARC-EP team, Ivan Marquez, have signed seven original copies of the document. They will be distributed to the negotiating sides, the guarantor countries and the accompanying nations (Venezuela and Chile).

The seventh document will be deposited, after its signing, at the Swiss Federal Council in Bern, as the depository of the Geneva Conventions.

The concluding text of the talks will be followed by the tenth conference of the FARC-EP and a referendum, whose date has not yet been set. The referendum seeks to endorse the agreement. There will also be a ceremonial signing of the peace agreement.

The signatories agree that although it is not a perfect agreement, it is a viable mechanism to initiate the necessary transformations in Colombia, on the basis of guarantees to respect the fundamental rights of future generations.