As Honduras Activists Continue to Burn, US Backs Govt

A total of US$55 million in foreign assistance will be funneled to Honduras in what the U.S. claims is meant to improve the country. 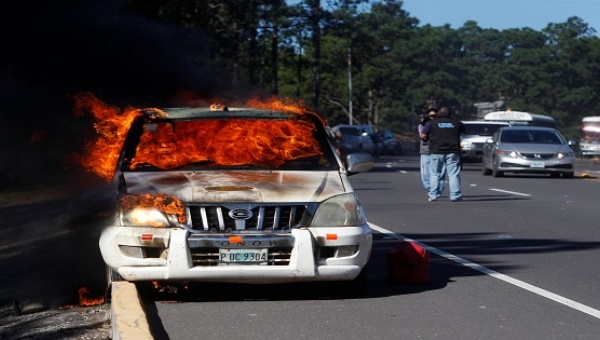 A vehicle set ablaze in Zambrano, on the outskirts of Tegucigalpa, Honduras, Oct. 3, 2016.
Photo: Reuters

21 Oct 2016 – The U.S. will continue giving millions of dollars in military funding to the Honduran government, despite the high-profile targeted assassinations and other human rights abuses documented this year in the Central American nation.

The decision taken by the U.S. Department of State on Sept. 30 was justified to Congress on the grounds that Honduras “has taken effective steps to meet the criteria specified in the Fiscal Year 2016 appropriation legislation.”

A total of US$55 million in foreign assistance will be funneled to Honduras in what the U.S. claims will improve security, governance and the economic difficulties that drive undocumented migration from the country.

The amount is supposedly subject to a series of conditions that range from combating corruption to protecting the rights of political opposition parties and journalists.

The justification that Honduras has taken “effective steps” to increase security and safety stands in stark contrast to the high levels of violence that has led to the Central American country having the world’s highest homicide rate at 90.4 per 100,000 inhabitants.

An Indigenous woman holds a poster with a photograph of Berta Caceres during a march to demand justice in Tegucigalpa, Honduras.
photo: Reuters

Violence and impunity have also seen civil rights activists lose their lives such as Berta Caceres, who was shot at her home in the western town of La Esperanza in March, and Jose Angel Flores and Silmer Dionisio George, two activists fighting for land rights who were both shot as they left a meeting in Tocoa in the north-east on Tuesday.