Colombia: A Bright Light for Peace Is Extinguished 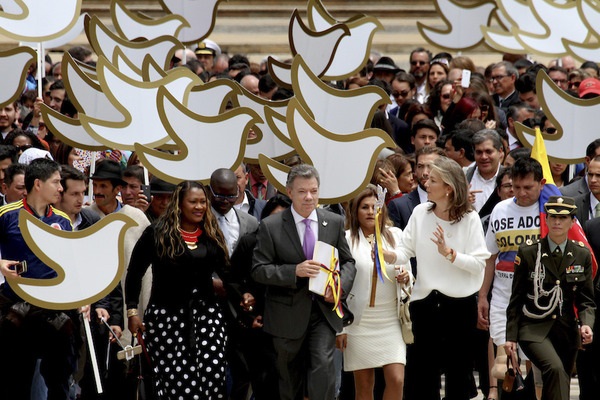 Colombian President Juan Manuel Santos, center, and his wife, Maria Clemencia de Santos, before presenting the FARC peace accord to the president of Congress in Bogota, Colombia in August. John Vizcaino/Reuters

17 Oct 2016 – The global scene has been miserable for the last decade at least, if not longer. The world is inundated by wars, big and small, that seem both unending and unendable; by horrendous cruelties about which their perpetrators boast; and by deliberate attacks on so-called safe zones. In this hell on earth, there has been only one bright light. What was called since 1948 la violencia in Colombia seemed to be coming to an end.

The struggle has taken the form since 1964 of an attempt by a peasant guerilla group called the Fuerzas Armadas Revolucionarias de Colombia (Revolutionary Armed Forces of Colombia, or FARC), to overthrow the government. The guerilla movement faced the fierce opposition of the government, with the active support of the United States. In addition, there were unofficial murderous right-wing paramilitary forces, which had the unavowed backing of the government.

What became apparent in the last decade was that neither side was able to win an outright military victory. The stalemate and the ensuing battle fatigue led each side to reconsider its all-or-nothing position and to enter into political negotiations. How did this happen?

On the government side, a new president was elected in 2010. He is Juan Manuel Santos, scion of a great aristocratic landowning family and an ultra-conservative in his politics. Under the previous presidency of Alvaro Uribe, he had been the Minister of Defense. As such, he had led a great offensive to wipe out FARC. However, he was a realist and, once elected president, he secretly sought negotiations with FARC.

On the side of FARC, a parallel succession occurred. The number of zones in which FARC had de facto military control had been reduced. Two successive leaders had been killed. The latest leader, Rodrigo Londoño, known by his guerilla name as Timochenko, was also a realist and also sought negotiations.

The secret negotiations led to an announcement in October 2012 that they reached the point of agreeing on a framework for discussion. They agreed to meet in Havana under the joint sponsorship of the governments of Cuba and Norway, and with the support also of Chile and Venezuela. These negotiations were long and difficult but, one by one, compromises were reached on six major issues. Hence, the Colombian government and FARC publicly signed an agreement on September 26, 2016.

However, before implementing the agreement, the Colombian government submitted the agreement to a plebiscite. The plebiscite was the idea of Santos, who felt that true peace required the legitimation of a popular vote. FARC thought it was a bad idea, but did not obstruct the vote.

The previous president, Alvaro Uribe, who had loudly opposed any negotiations from the beginning, led the call for a no-vote. The polls indicated an easy win for the yes-vote. However, in the plebiscite on October 2, the no-vote obtained a very narrow victory of 50.2 percent. Colombia and the world has been in shock ever since.

Why were the advance polls so mistaken? There may have been many factors. Some persons may have lied to the pollsters, not wishing to admit to being opposed to a “peace” accord. Some yes-voter persons may have been “lazy” and not bothered to vote because the polls indicated such an easy victory for the yes-vote. Unexpected bad weather made it difficult to vote in some pro-FARC rural areas. And perhaps some wavering yes-voters may have had last-minute fears about allowing FARC to enter the political process. Only 37% of the eligible voters cast a vote.

Whatever the explanation, the entire peace process has been upended. For Colombia, the question is what next? Alvaro Uribe says that he will not discuss anything with FARC. He insists that the Santos government retract two key concessions to FARC. One has to do with leniency for FARC leaders for past violence. The second has to do with a guarantee to FARC of some non-voting seats in the next two legislatures, a proposal that would allow a reorganized FARC to enter the political process legitimately.

Into this confused situation the Norwegian Nobel Committee has entered the picture with its award on October 7 of the peace prize to Santos. Let us notice several things about this award. First, the decision was made before the plebiscite. The award was therefore for an achievement that has not in fact been realized. The award reflected widespread sentiment around the world.

Secondly, this was an award made to him alone and not to his negotiation partner, Londoño. This is very unusual. In the six other times since 1945 in which the prize was awarded for a peace agreement, it was always awarded jointly to the leading figure on each side. Was the Norwegian Nobel Committee hesitant to include Londoño because they sensed it was too delicate an issue? It could not have been more upsetting to some people than giving the prize to Arafat in 1994 or to Henry Kissinger in 1973.

Does the prize for Santos strengthen his hand? Slightly, but I cannot imagine that Uribe is ready to make any serious concessions now that he has won the plebiscite. FARC seems more willing to discuss the matter. And complicating the matter is the fact that another smaller guerilla movement – the Ejército de Liberación Nacional (National Liberation Army, or ELN) has not even started negotiations with the government. The plebiscite’s result reinforces those within the ELN who are against any negotiations at all.

Frankly, I do not see any way the peace accord can be saved. The exceptional bright light of Colombia has been extinguished. Colombia is now like all the other areas of unending conflict. So I say to Santos and Londoño: Nice try, but you didn’t make it. The chaotic world situation continues unabated in what I remind you is the struggle to decide on the successor system to the capitalist system that is now in systemic crisis.