Up to 21 people were arrested during a peaceful prayer service. 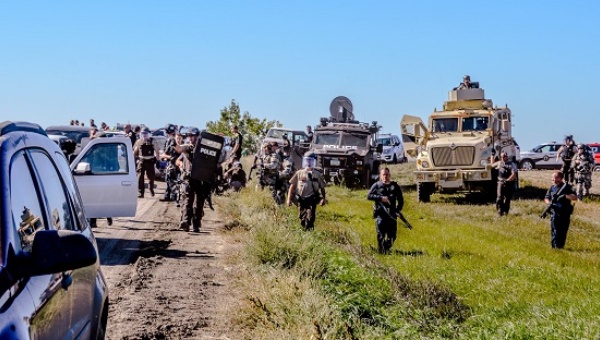 29 Sep 2016 – North Dakota police with military-style equipment surrounded Native Americans gathered in prayer against the construction of the Dakota Access pipeline on Wednesday, disrupting their plan to cross sacred and treaty-protected land in protest of a project they fear will destroy their livelihood.

Officers with military-style armored vehicles and shotguns threatened the protesters, who call themselves “water protectors” for defending the Missouri River from imminent pollution, reported Unicorn Riot. Up to 21 were arrested, the channel reported.

Witnesses filmed the crackdown but said their access their Facebook was blocked. One participant, Thomas H. Joseph II, posted a chilling video narrating the mobilization and his getaway. Helicopters are heard as he says that tear gas is being dropped, and an officer loads his gun as protesters, some on horseback, chant, “We have no guns.”

In the video, Joseph said that “one guy’s about ready to blast us” but later added that no fires were shot.

“We gathered in prayer un-armed, prayed, sang songs, and attempted to leave,” he later wrote in a Facebook post. “No threats, No vandalism, No violence was taken on our part.”

Police and private security personnel have been more aggressively cracking down on actions against the pipeline since the governor declared a state of emergency. The state is currently investigating an incident in which contracted private security film Frost Kennels unleashed dogs during a nonviolent direct action, ending with six bitten, including a pregnant woman and a child, according to organizers at the action.

Alternative media outlet Unicorn Riot previously accused Facebook of censoring its livestream of police repression, saying they received a popup security alert when they tried to post the video.

The pipeline, expected to transport over half a million barrels of oil a day through four states, has united over 300 tribes in resistance. Several lawsuits are pending against the company, which has retaliated with restraining orders. The White House halted construction on federal land, which makes up three percent of the pipeline’s path, but has not issued any other statement against the pipeline—motivating Facebook users to demand a response after Wednesday’s crackdown.

President Barack Obama met with tribal representatives on Monday but only made an indirect reference to the historic native gathering: “I know that many of you have come together across tribes and across the country to support the community at Standing Rock,“ he said. “And together, you’re making your voices heard.“