Murder of Activists in Latin America ‘Out of Control’: Oxfam

The expansion of extractive industries is closely linked to the rise of murders of activists, argued the report. 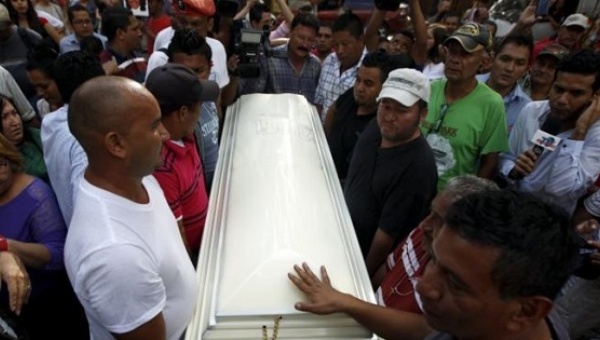 Supporters carry the coffin of slain environmental rights activist Berta Caceres after her body was released from the morgue in Tegucigalpa, Honduras, March 3, 2016. | Photo: Reuters

25 Oct 2016 – The number of human rights activists and environmentalists killed in Latin America has dramatically skyrocketed in recent years, found a report called “El Riesgo de Defender,“ or the Risk to Defend, released Tuesday [25 Oct] by Oxfam, while extractive projects have spread in rural and Indigenous areas.

“The region has fallen into an unthinkable spiral of violence, and this must stop. Too many lives have been lost, and harassment against human rights defenders continues with impunity. It is time for governments to take action, with no more excuses or delays,” said Asier Hernando, Oxfam’s Regional Deputy Director in Latin America and the Caribbean, reported Common Dreams.

Oxfam was not the first organization to raise awareness about the attacks affecting the region, as it records the highest rate of homicides of human rights activists in the world, at 65 percent.

In 2015, 122 activists were killed. In 2015, between January and May, 58 were killed, according to Global Witness, including prominent Honduran environmentalists Berta Caceres, Jose Angel Flores and Silmer Dionisio Jorge.

The impunity rate is quite stunning in most of the cases, as 98 percent of murders have not faced judicial procedure in Mexico and Colombia in recent years. Women are even more targeted than male activists, the report also found.

“We are witnessing an unmitigated rise in attacks, including killings of leaders who fight in their own countries for basic human rights such as equality, access to water, or access to water or land.

“Even international recognition or support for human rights defenders has offered little protection, as seen in the cases of Berta Caceres, murdered in Honduras, or Maxima Acuña, who continues to suffer ongoing attacks in Peru. If they can kill and threaten these recognized figures, the level of exposure and vulnerability for lesser known leaders is that much greater,” Hernando added.

According to the report, the rise of attacks is due to an expansion of extractive industries supported by most governments in the region, in a bid to compensate the economic slowdown that has affected national economies since 2008.

“Without a doubt, the dynamics of extractive industries fail to respect the right to free, prior and informed consent, as these businesses undertake large-scale projects without authorization from the communities, triggering widespread violence against citizens who oppose these projects in their territories,” said Hernando. “What is worse is that in the majority of these cases all of this occurs with the acquiescence of the governments, who grant licenses without regard for international protocols.” ~