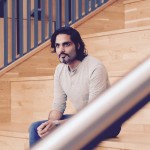 – What is that philosophy book you were reading?
Have you written something new? Five days
I didn’t hear a word… what about your local
peace group? Be gentle, do not criticise them,
they will realise one day –

A postcard arrives, stamped from Victoria post office:
at the bottom it reads – Oona’s Mum – Along with it
another packet; I tear brown paper and there is a thick
hand cut card, its edges at places narrowing like London roads
where cyclists and cars and buses converge.

In the card, leaves glued from fern, Garry oak, arbutus
and other trees, and her writing next to these reads
– they are all native to the west coast –
like First Nations children who were snatched from
their homes by the federal government between
1840 to 1990s.

I write to her every week, but nine days now
I had nothing to speak. Her cards, her parcels always swift:
in three days they travel from BC to London, now in my
post box; opened it before climbing up the seventh floor
after a crowded humid day in the city.

– This is the last message I write…
Off to Cumberland soon to watch
descendants of miners sing aloud, read verses
and lay roses on miners’ graves.
No access to telephone or computer…
no access to the outside world –

Six days pass and I wonder what I will write
in my next letter, unopened when she switches on
her computer in the study room where she
– can see the USA from the window –

Perhaps I should write I have stopped doing letters:
words are not noisy they don’t travel
past my front door, they are cheap, they are worthless,
they are ignored.

Spent two weeks writing letters to journalists
of left and centre, telling them of the epidemic in India:
“You report about rape but no one utters a word
about Taara who is beaten every night in Delhi
by her husband and in mornings she walks her
daughter to school.”

Only if my alphabets were as swift
as Victoria post from BC to London; only if a beaten
mother and a child were more important than an
A-list celebrity’s new born baby.

I give up my indifference to words, my fingers positioned
on keyboard, I start typing, I hammer on keys, I write:
“Each morning I flipped the newspaper thinking of you;
there is nothing that you missed.”

This poem was longlisted for the Canterbury Festival Poet of the Year 2016 Prize.

Sumeet Grover is the founder of Global Poetry, dedicated to creativity, human dignity, dialogue and global citizenship. He is a winner of the Portico Brotherton Open Poetry Prize 2014 and was shortlisted for the Jane Martin Poetry Prize in 2014 & 2015. He has authored two books of poetry: House Arrest & Disobedience (2015) and Change (2011). Grover is a member of the TRANSCEND Network for Peace, Development and Environment and of the TRANSCEND Art & Peace Network.

Anticopyright: Editorials and articles originated on TMS may be freely reprinted, disseminated, translated and used as background material, provided an acknowledgement and link to the source, TMS: Oona’s Mum, is included. Thank you.