Rebuilding Haiti, One Commune at a Time 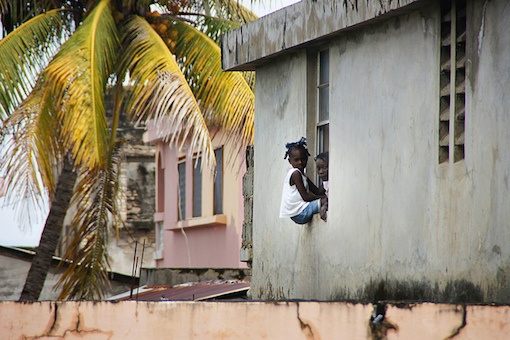 Photo by Feed My Starving Children | CC BY 2.0

11 Oct 2016 – As Hurricane Matthew continued onto the U.S., the waters receded in Haiti, and it became apparent that the damage in Haiti was immense.

Just like many people who either are Haitian or work in Haiti, I’ve been asked by people who want to help for recommendations. Unfortunately, the answer isn’t simple, because of the logistical challenges and also the isolation of many of the most impacted areas, because of the hyper-centralization.

It has taken a while for news to trickle in. For the last two years I’ve been conducting a study of eight communities across the south of Haiti, including in the South and Grand Anse, two of the most affected provinces from the hurricane. Just like many people, I have been waiting for bits and pieces.

The extreme centralization of resources and decisionmaking power in Port-au-Prince, briefly explained in my previous post, rendered communication and logistics more difficult. As anthropologist Laura Wagner said, “this hurricane and the earthquake are extreme opposites of the same problem of centralization.”

Jessica Hsu, who for years as a Peace Corps volunteer lived and worked in Zabriko / des Abricots, in the Grand Anse, returned to the town an hour and a half away from the local capital of Jéremie on Friday.

Hsu reported that on Saturday, four days after the storm passed, the road was passable by motorcycle. A team of public works, a tractor, was moving its way from Jéremie, trying to clear the road.

Verdy Renois, a Masters’ student in Development Sciences at the Faculté d’Ethnologie, who lives in Pestel, on the other side of the Grand Anse, said “you can see pictures, and videos, but you have to be here to really understand it.” Renois, who worked on the research project noted above, reported only seeing 20 houses standing from the normally two-and-a-half hour trip from Les Cayes, in the south, also destroyed by Matthew.

Hsu recounted what a Zabriko community leader said: “It’s like Hiroshima.” Tree trunks are bare, and even root crops like manioc and yams have been uprooted.

This isn’t limited to Zabriko. Ernst Mathurin, director of GRAMIR, a Haitian NGO with over three decades of experience in the Grand Anse, recounted with horror the massive tree loss all across the region. Mathurin made a visit to Anse-à-Veau, to the west of Abricots. “There isn’t a plantain or a breadfruit tree left.” While dependent on the outside for everything else, the Grand Anse did have significant food production. During harvest, at least, people could eat. The state of the roads meant that a crop like breadfruit often had to be consumed right away since it was difficult to get to markets in Port-au-Prince to sell.

Hsu reported that in addition to trees, livestock has also been killed. In Haiti’s rural economy, goats and pigs are like people’s bank accounts, used to help send their children to school, or pay for funerals.

With the phone service up as of Saturday night, I was able to call Zabriko mayor Jean Ricarlto Louis, who had conducted an emergency needs assessment on Friday, October 7. As of noon that day, 4,463 people took shelter in 15 community locations. Ten people died, with seventeen others injured. The report also counts 1,380 damaged houses. Louis, also a student at the Faculté d’Ethnologie, said that 98 percent of houses are inhabitable.

Louis recounted the community of Zabriko’s efforts. “We intervened, engaged a consciousness raising / public service announcement with the population. Along with Civil Protection, the Brigade, and Police, we asked people to relocate to Bigot [up the hill]. People shared what resources they had. It was very organized.”

Mathurin, who also hails from the Grand Anse, underscored that the effective and quick response from the local authorities was key. “If the mayors and Civil Protection didn’t evacuate the population, the death toll would have easily been ten times greater.” Hsu also noted that prevention also helped: the seawall built when Jean-Claude Fignole was mayor did indeed blunt much of the storm surge, reducing the vulnerability. The damage would have likely been much worse.

Louis reported that in Zabriko, “The community was motivated and involved despite that people are vulnerable. There are eight provisional shelters. Everyone who has a standing house has welcomed people. We [the local government] did not have money, so we borrowed on credit, to give people food and water.”

“All in all the community did an excellent job.”

The problem is, as Louis underscores, “our stocks are now depleted.”

Urgent priorities for the short term include food, water, electricity, shelters, and tin. For the medium term, Louis is asking for social housing. Louis was also clear to tell me that these are provisional, as was the report, based on the best information we have to date.

As an elected official, the head of a three-person team, Louis also asks, “If NGOs have something to offer, come directly to us. We are closer to the people, we know the terrain, and we have a mandate.”

This sentiment is shared by every single Haitian person I’ve been able to connect with so far. This time around, the aid needs to go to and through the local government. Rosnel Jean-Baptiste, coordinator of Tèt Kole Ti Peyizan, Haiti’s largest peasants’ association with members in all ten provinces, warned “on the pretext that they’re helping, we are concerned that NGOs do the same thing, exclude the population.”

Ilionor Louis, chair of Development Sciences, declared that “MATTHEW HAS SPOKEN! We need to stop profiting off of its name to enrich NGOs to create false projects while problems of the victims remain unchanged.”

The attitude in Haiti is understandably critical following the lackluster response to the 2010 earthquake. Not only not meeting its objectives, the way the aid was delivered triggered a range of new problems which can be considered “humanitarian aftershocks.”

People are talking about how to do better. Groups in the Haitian Diaspora have compiled a list of organizations they’ve endorsed, and have set up an emergency Matthew Fund through the Haiti Renewal Alliance. Individuals working in Haiti have created a Facebook group. The Haitian government posted a list of best practices.

Some are calling upon NGOs who are collecting emergency aid to sign a pledge, with new “minimum standards.”

So when asked about the relatively isolated Grand Anse, not a single Haitian professional could identify an international NGO to recommend.

There is an alternative to the NGO structure.

There is an Association of Mayors of the Grand Anse (AMAGA), which as the name sounds is a network of elected officials, like Zabriko’s mayor Jean RicarltoLouis. Founded by the then-mayor of Zabriko, novelist/poet Jean-Claude Fignole, who now resides in Pestel, AMAGA has established partnerships with mayors of towns in France and other Francophone countries. Before the hurricane AMAGA organized projects like cocoa production and marketing, road rehabilitation, and combining fishing and farming. However, as of today, AMAGA does not yet have a U.S.-based 501(c)(3) fiscal agent to receive tax deductible donations.

The dilemma is, of course, that people feel an urgency to contribute now, before the needs have been fully identified and logistics solved. The message so far is: contribute local. Involve the local population. Work with the government. Until international agencies sign a pledge to do better, groups that have been established and have long term aid in affected regions are best suited, like Haitian Health Foundation in Jéremie, Fondation Paradis des Indiens in Zabriko, ORE or Mazenod in Camp-Perrin, the Lambi Fund of Haiti in the South, Nippes, and Northwest, or Tèt Kole in all ten provinces. The Haitian Diaspora has founded an array of hometown associations all over Haiti.

However, the problem with this timeliness, with the window closing fast as the world’s attention moves elsewhere, is that as everyone I spoke to in Haiti warned, this is going to be a long process. Everyone pointed to cholera, brought from UN troops. And it’s about long term building. Mathurin reminded, “We need to not lose time being discouraged. We need to rebuild the agricultural base and plant trees.” Jean-Baptiste pointed out that “Haiti can feed Haiti. We need to help peasants produce and work for the long term.”

While I understand the urge to reach into our pockets now, to the many people who are asking how to help, we all need to listen to, follow, and accompany these and other Haitian leaders and be prepared to also be engaged in the long term.

With assistance from Jessica Hsu, Roseline Lamartinière, and Heather Prentice-Walz.