The US and Canada Have Blood on Their Hands in Honduras

The international community needs to be held to account for propping up and subsidizing the murderous regime in Honduras. 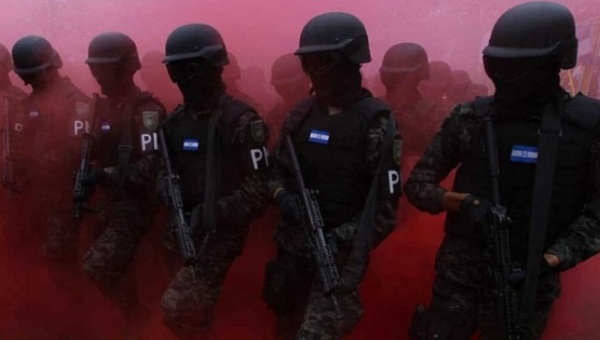 Members of the military police march during a parade commemorating Independence Day of Honduras. Photo: Reuters

The march on Thursday organized by the Civic Council of Popular and Indigenous Organizations of Honduras, or COPINH, and OFRANEH, an organization which represents the Afro-Indigenous Garifuna people, converged outside the Attorney General’s office to demand justice following the assassination of two more prominant social movement leaders in the country.

Police and COBRA forces attacked just as OFRANEH was initiating a drumming and spiritual ceremony. COPINH was once led by globally-renowned activist Berta Caceres, who was murdered this year for opposing the construction of a dam. They are two of the most respected community organizations in Honduras since before the 2009 U.S. and Canadian-backed military coup, and particularly since then.

Eyewitness Karen Spring from the Honduras Solidarity Network reported:  “The repression was brutal and I’ve been in a lot of repressive marches since the 2009 coup.  This one was up there with the worst, especially since a COPINH member reported that one police took his gun out and fired a shot at his feet.  It all happened so fast and no one expected it; there was no time to get children and elderly out.  People were grabbing kids and running with them as they were crying and choking from the teargas.  The police chased protestors for almost 2 kilometers from the Attorney General’s office.”

COPINH and OFRANEH marched to denounce the  assassinations  this week of Jose Angel Flores and Silmer Dionosio George, two leaders of MUCA, or the Unified Campesino Movement of the Aguan, and the recent attempted killing of two COPINH members. The organizations also are demanding justice for the March 3 assassination of COPINH co-founder Caceres; the establishment of an independent international commission to investigate her assassination; and to demand cancellation of the concession granted illegally to the DESA corporation to develop the Agua Zarca hydroelectric dam project in Rio Blanco, along with numerous other illegal mining and hydroelectric concessions on Lenca territories in western Honduras.

After the attack, Berta Caceres’ daughter – Bertita – spoke in a press conference:

“This is yet another act of repression against people demanding justice for the assassination of our compañera Berta Cáceres.  How is it possible that soldiers, weapons and repression are the only way the regime deals with us, even when we have Protective Measures from the Inter-American Commission of Human Rights? … Despite all this repression, harassment and criminalization, we will not permit the construction of development projects of death in our communities.”

Do Not Write Letters of Protest to the Regime

Wondering what to do about this latest act of State repression in Honduras?

Don’t write letters of protest to the regime.

They are impervious to them.  In power since the 2009 coup, the economic, military and political elites care about two things: maintaining their mutually beneficial economic and political relations with and support from the international community (primarily: governments of U.S., Canada and the European community; the World Bank and Inter-American Development Bank; and a host of global investors and companies working in the sectors of African palm, sugar cane, bananas, garment “sweatshop” factories, mining and tourism); and, maintaining relations with and support from the U.S. military.

The repression, corruption and impunity in Honduras are not “Honduran” problems. They are problems of this so-called “international community” together with the Honduran elites. International economic and military relations are the lifeblood of the regime.  This is how power works.

Through our denunciations and activism, we have to make this “international community” take responsibility for its actions. If accountability is not brought to complicity of the military, economic and political backers of the Honduran regime, the repression, corruption and impunity will not stop.

Grahame Russell is a non-practicing Canadian lawyer, author, adjunct professor at the University of Northern British Columbia and, since 1995, director of Rights Action (www.rightsaction.org / info@rightsaction.org).  Follow, also, the work of the Honduras Solidarity Network (http://www.hondurassolidarity.org/).