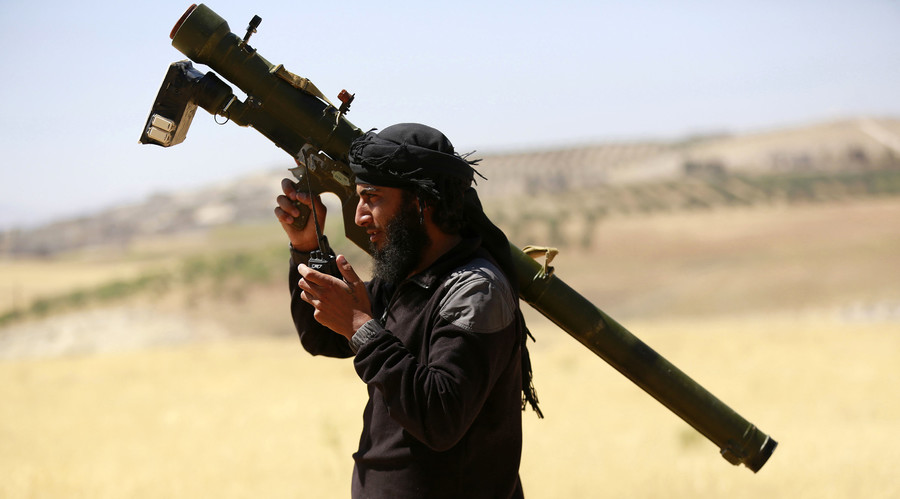 22 Oct 2016 – When you reach the stage of making a distinction between good terrorists and bad terrorists, not only are you defending the indefensible, you are engaged in the ugly business of sowing dragon’s teeth.

Jahbat Al-Nusra, which recently changed its name to Jabhat Fatah al-Sham, is a terrorist organization dripping in the blood of men, women, and children – people it has butchered across Syria over the past five years for the crime of praying to a different God than them, or else the same God in a different way. Such an organization, you would automatically think, has no place in this world, with its eradication a priority for all right-thinking humanity. Not so when it comes to Washington.

During a press briefing in Washington on October 20, US State Department spokesman, John Kirby, was asked by a reporter, “Is the US fighting al-Nusrah [sic] in Syria at this time?” Kirby replied, “Our efforts militarily in Syria, as I said today, is against ISIS, against Daesh.”

Kirby also said, “The only thing that stands between where we are now and a permanent and enduring ceasefire in Syria is Bashar al-Assad and his supporters,” Kirby said. “We recognize Al-Nusra as a spoiler, we have concerns about co-mingling, I’ve talked about this ad nauseam.”

This is a startling admission of Washington’s duplicity when it comes to combatting terrorism. Because not only is the US refusing to target Al-Nusra, it is actively refusing to share intelligence with Russia to help Russian forces target the Al-Qaeda affiliate either. Moreover, Washington has been doing its utmost to inhibit and impede the military operation that is currently being conducted against Al-Nusra in Aleppo by Russian and Syrian forces. As for those so-called moderate rebels we are constantly regaled with – you know, the nice guys who behead people with knives and swords made out of candy floss – there have been zero attempts to separate them from Al-Nusra in eastern Aleppo by the Americans or their regional allies, despite repeated requests from Russia for them to do so.

Considering the scale of the human suffering being endured in Aleppo – and here it is notable that upon halting the military operation to liberate the city in order to allow more civilians safe passage out of harm’s way, along with the opportunity for rebels to leave the city, Syrian and Russian personnel involved in assisting the process have come under fire – Washington’s role in prolonging the conflict has now been laid bare for all to see. For, in truth, the unprecedented anti-Russian propaganda campaign has less to do with concern over the suffering of the people of eastern Aleppo, and more to do with the fact that the military operation being conducted by Russian and Syrian forces is moving ever closer to liberating them.

Russia’s foreign minister, Sergey Lavrov, said: “Both Al-Nusra Front and Ahrar ash-Sham, along with other organizations cooperating with them, are ultimately sabotaging UN efforts to restore the delivery of humanitarian assistance to eastern Aleppo, [carried out] with [Russia’s] support and the support of the Syrian government.” He went on to say, “[They] explicitly shell those routes through which such humanitarian aid can be delivered.”

Aleppo is key to the outcome of the wider conflict, as Washington knows, and, given that its overriding objective is the overthrow of the Assad government, its strategy towards the fighting in Aleppo becomes clear.

Just ponder this a moment: while Russian and Syrian forces have been engaged in a military operation to crush Al-Nusra in eastern Aleppo with the objective of liberating its people, Washington and its allies have been actively obstructing their efforts to do so; instead focusing their energy on peddling unfounded accusations that Russian and Syrian forces have been deliberately and willfully targeting civilians. It has been contemptuous to behold.

The conflict in Syria, it bears repeating, has never been about democracy in the eyes of Washington. Instead, it is about domination, about reshaping the region according to strategic objectives that pre-date the conflict. The Assad government had long been considered a key obstacle in this regard. A classified US diplomatic cable from 2006, released by WikiLeaks, leaves no doubt of US plans to destabilize the Syrian government. From the then US ambassador to Syria, the cable reads in part, “…there are some long-standing vulnerabilities and looming issues that may provide opportunities to up the pressure on Bashar and his inner circle.” It goes on, “Actions that cause Bashar to lose balance and increase his insecurity are in our interest because his inexperience and his regime’s extremely small decision-making circle make him prone to diplomatic stumbles that can weaken him domestically and regionally.”

The conclusion of the analysis contained in the cable is particularly interesting. “The bottom line is that Bashar is entering the new year in a stronger position than he has been in several years, but those strengths also carry with them (or sometimes mask) vulnerabilities.  If we are ready to capitalize, they will offer us opportunities to disrupt his decision-making, keep him off-balance, and make him pay a premium for his mistakes.”

Al-Nusra is an offshoot of ISIS [Islamic state, formerly ISIL] in Syria. It is an organization that shares Washington’s objective of overthrowing the Syrian government, led by Bashar al-Assad. However, Nusra is also committed to the eradication of Syria’s Christian, Shiite, Druze, Alawite, and other minority communities. In other words, its aims and objectives are nothing short of genocidal, which is where the locus of support for those fighting to defeat this group, along with the so-called moderates fighting alongside Al-Nusra and ISIS, resides. It is why, at this point, the survival of the Assad government is indistinguishable from the survival of Syria as a secular, non-sectarian state.

It is to Washington’s eternal shame that it refuses to acknowledge this fact and act accordingly.

John Wight has written for newspapers and websites across the world, including the Independent, Morning Star, Huffington Post, Counterpunch, London Progressive Journal, and Foreign Policy Journal. He is also a regular commentator on RT and BBC Radio. John is currently working on a book exploring the role of the West in the Arab Spring. You can follow him on Twitter @JohnWight1