Why Colombians Opposed the Peace Deal with FARC

The outcome of the referendum on the peace accord may be shocking but it is largely a result of domestic politics. 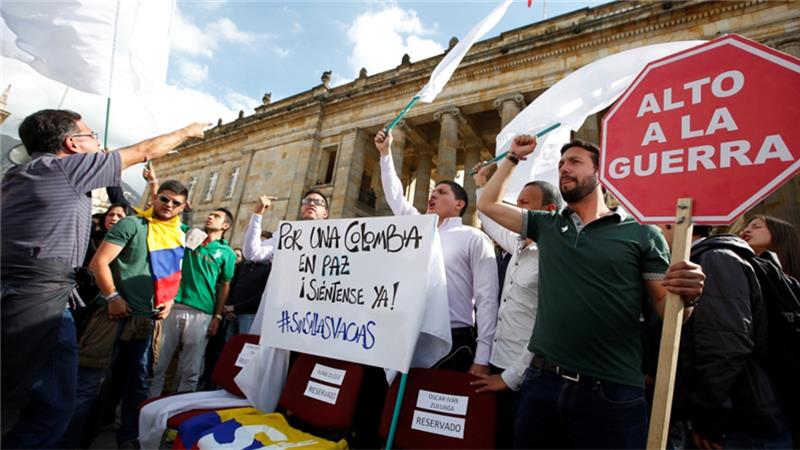 Supporters of the peace deal protest during a rally in front of Congress in Bogota, Colombia [REUTERS]

4 Oct 2016 – Just last week, western media was praising the Colombian peace agreement. Four years of negotiations in Cuba, commentators noted, had finally put an end to a 50-year conflict between the government and the left-wing rebel movement Revolutionary Armed Forces of Colombia (FARC), and involving various right-wing paramilitary groups and narco cartels that had claimed an estimated 200,000 lives, and displaced five million people.

The negotiators had hammered out a 300-page document, and on September 26, Colombian officials and FARC representatives signed an accord in Cartagena, in front of foreign dignitaries including UN Secretary General Ban Ki-Moon and US Secretary of State John Kerry.

When Colombia’s President Juan Manuel Santos and Rodrigo Londono, the leader of the FARC, shook hands, jets flew overhead trailing smoke in the yellow, blue and red of the Colombian flag. The upcoming referendum on the accord, pollsters predicted, would be a resounding “Yes”.

The result while shocking, is not inexplicable. The vote was largely a result of domestic politics.

For all the backing that Santos managed to secure at the international level – from Washington, the European Union, Pope Francis and several Latin American states – he failed to build domestic support, and to persuade Colombians of the merits of the accord.

Moreover, he was sharply out-manoeuvred by former President Alvaro Uribe, who led the “No” campaign, bringing together various conservative actors, in a sign that perhaps the right is making a comeback in Colombia, just as it resurged in Brazil and Argentina. 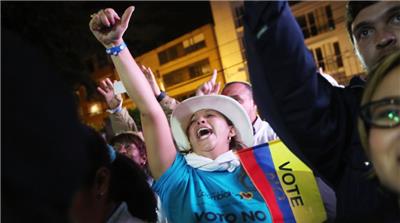 ‘No’ supporters celebrate at a rally following their victory in the referendum on a peace accord in Bogota, Colombia [Getty]

For months now, critics of the accord have argued that, by granting amnesty to FARC, the agreement secured peace at the expense of justice.

The accord would have granted amnesty to rank-and-file FARC fighters – who would be disarmed by the United Nations – as well as to commanders who ordered atrocities.

The latter would have to confess their crimes in front of a special tribunal, and then do community service. These commanders would have their movement restricted for some years, but would not have to serve a prison sentence.

Critics of the accord have argued that, by granting amnesty to FARC, the agreement secured peace at the expense of justice.

Critics also noted that implementing the deal and integrating former fighters into Colombian society would have cost the Colombian government an estimated $31bn to $90bn over the next decade.

Furthermore, to help transform the 5,800-strong rebel army into a political party, the accord also reserved five seats in both houses of Colombia’s Congress in the 2018 election for a four-year term.

Over the past few months, opposition to the accord was publicly expressed in Colombia.

“I’m voting ‘No’ because the FARC have been untruthful in the whole process,” stated Enrique Celis, who believes his brother-in-law, a Colombian soldier, was kidnapped by the FARC in 1990, “This deal doesn’t get a real justice or reparations for the victims.”

Santos has fully acknowledged the compromises he made. He compared the peace negotiations to “eating toads” – but insisted that an amnesty was the only way to get the rebels to lay down their arms.

Denunciations of the amnesty formed the crux of Uribe’s opposition to the agreement. Uribe, who was president from 2002 to 2010, had, with US President George W Bush’s support, launched a military campaign against FARC.

Uribe endorsed Santos as his successor, but became a strong critic when the Santos embarked on peace negotiations with the FARC. Last year Uribe, launched his “No” campaign, travelling across Colombia arguing that the deal offered amnesty to “war criminals”.

Uribe also took advantage of the unrest in neighbouring Venezuela, warning that the agreement if approved could bring narco-chavismo to Colombia, and give cartels a greater role in national politics.

He also cautioned that the accord would choke Colombia’s already struggling economy, and stated that allowing the FARC to become a political party would pave the way for a far-left government.

The conservative politician successfully tapped a widespread hatred of the FARC, and fear that the rebel army could simply transmute into myriad criminal organisations involved in extortion and narcotics.

A geographic depiction of the referendum shows that the “no” side got most votes in areas where Uribe and his Democratic Centre party have their strongest support.

Shortly after the results appeared, FARC announced that it would abide by the ceasefire, which has held for a year now. On Monday, Santos, called for a new national dialogue convening all political groups, including the opponents of the deal.

In a televised address, he had asked former vice president Humberto de la Calle – the government’s chief negotiator who earlier had offered his resignation – to “begin discussions as soon as possible”.

The message that Colombians who voted “No”, sent on Sunday, was not for a return to armed conflict, but for a deal that is not so generous to the rebel group.

“No” voters want FARC commanders to face prison time for their crimes, be banned from entering Congress and surrender ill-gotten land and money. These are the demands that Santos, who has staked his legacy on the peace process, will now try to extract from the rebel side, in face of greater domestic opposition and international scrutiny.

Hisham Aidi is a Harlem-based writer. He teaches at Columbia University’s School of International and Public Affairs.

One Response to “Why Colombians Opposed the Peace Deal with FARC”