The Church’s admission of guilt comes after years of denying its role in that and many other genocides around the world. 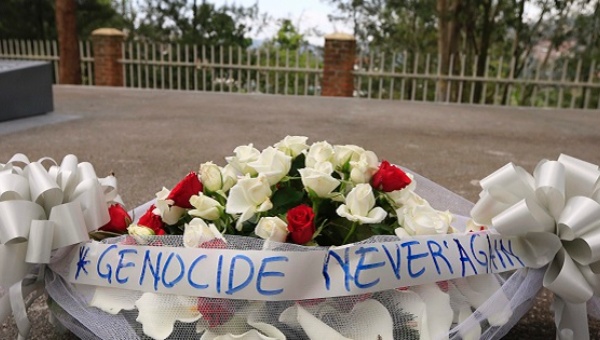 A bouquet of flowers tied with a ribbon showing the message “Genocide Never Again.”
Photo: Reuters

21 Nov 2016 – Embarrassed for its leading role in the 1994 Rwandan genocide, which saw more than 800,000 people massacred, the Catholic Church in that country issued a statement apologizing on Sunday [20 Nov].

According to the statement given by the Conference of Catholic Bishops, the church masterminded, aided and executed the genocide in which ethnic Tutsis and moderate Hutus were exterminated by Hutu fanatics.

Of course, the admittance of responsibility and guilt came only years after Rwanda’s local church had denied any responsibility, claiming officials had acted on their own. But that had never sat well with the many survivors and government officials who, for years, demanded the church accept its complicity in the massacre.

Survivors have always held that there were thousands of victims who suffered at the hands of priests, clergymen and nuns. The Rwandan government has also said that even more victims died in the very churches where they had gone seeking refuge.

“Forgive us for the crime of hate in the country to the extent of also hating our colleagues because of their ethnicity. We didn’t show that we are one family but instead killed each other,” the statement, read across the country’s parishes, noted.

The news coincided with the formal end of what Pope Francis deemed a “Holy Year of Mercy” in order to encourage a “revolution of tenderness,” as he was quoted saying in an Italian magazine last year.

However, while the news was welcomed by many as a positive development in Rwanda’s troublesome path at reconciliation, it is imperative to note that the Catholic Church’s role in genocides has not been limited to that country.

In Latin and North America, the Catholic Church’s so-called Doctrine of Discovery gave way for the brutal subjugation and extermination of Indigenous Peoples, either physically or culturally, in what’s been known as one of the largest genocides in the world.

Indeed, in Canada, a recent report by that country’s Truth and Reconciliation Committee concluded that the Church, along with succeeding governments, engaged in “cultural genocide” of the Indigenous population.

Among the most notorious findings was that more than 150,000 Indigenous children had been forcibly taken from their families and subjugated to violence, rape and even murder in order to “take the Indian out of the child” through the Residential School system. The last such “school” was closed there as recently as 1996.

The Church has yet to offer an apology to the survivors of that genocide. Last year, however, Pope Francis, speaking at the World Meeting of the Popular Movements in Santa Cruz, Bolivia, admitted what had happened across the Americas was truly a barbaric crime.