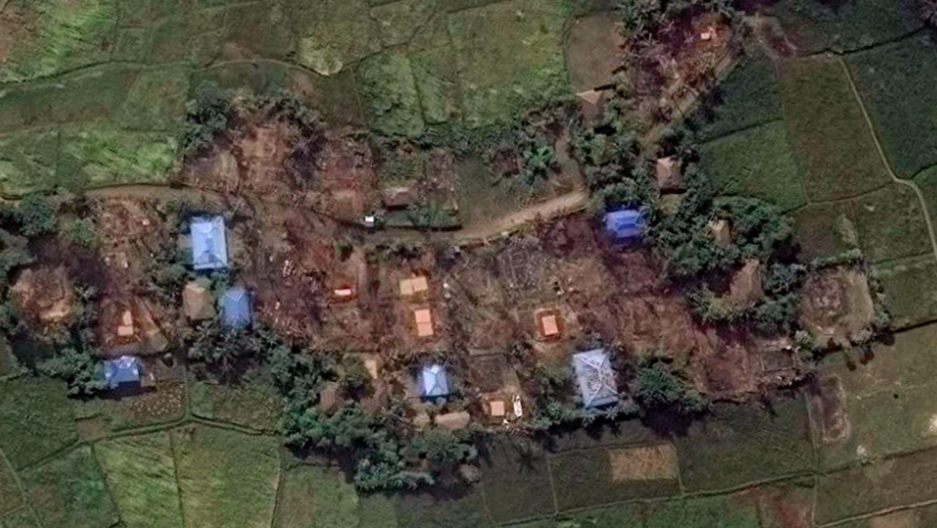 A satellite image from Nov. 10 shows a Muslim village burned down in an arson spree allegedly committed by Myanmar’s army. According to Human Rights Watch, at least 400 buildings in Muslim-majority parts of Myanmar have been destroyed.
Credit: Human Rights Watch/Courtesy

If Myanmar’s notorious army is to be believed — that’s a very big if — its soldiers are facing a highly deranged adversary.

15 Nov 2016 – Along Myanmar’s marshy coastline, villages keep going up in flames. All of them belong to the Rohingya, a horribly persecuted Muslim group. The arsonists? Muslims themselves, according to the army.

The Rohingya, we are told, are burning their own homes to attract well-armed government platoons — and then sprinting at them with knives, berserker style, so that they can get mowed down by the dozens.

This narrative defies logic. But it’s hard to challenge directly — and that’s how the army likes it.

Myanmar’s military has turned much of the Rohingya’s homeland into a no-go zone for aid workers and non-compliant journalists. It has become, in the words of one expert, an “information black hole.”

Relieved of prying eyes, the military is aggressively purging Muslim villages that have been infiltrated by an “extremist violent ideology.”

These raids began shortly after the October emergence of a poorly armed Rohingya militant group numbering in the hundreds. According to government reports, a series of clashes have killed about 17 officers and more than 65 militants.

Simply not plausible that villagers "burned their own houses". https://t.co/NYrqOqyUNS

The military is now in a highly advantageous position. It brings superior firepower — columns of troops and attack choppers — to combat a ragtag group that is mostly armed with “small guns, swords, spears and sticks.”

Furthermore, Myanmar’s predominately Buddhist citizens appear to broadly support the army’s purges. In one of Asia’s most ethnically diverse nations, no group is as denigrated as the Rohingya.

The army is operating in a void, free of critical onlookers who might defy the official narrative. However, technology offers a few ways to illuminate the facts.

Using satellite images, Human Rights Watch has monitored the remote region where the army’s purge is ongoing. Their findings: a widespread torching of villages that has incinerated at least 400 buildings.

“These satellite images of village destruction could be the tip of the iceberg given the grave abuses being reported,” said Phil Robertson, deputy Asia director with Human Rights Watch.

In addition to cameras orbiting the Earth, mobile phone cameras are also helping to reveal Rohingya suffering. Shaky footage, allegedly capturing the aftermath of air strikes, appears to show the corpses of children sprawled out on the grass.

The exact nature of these videos is hard to verify. But they suggest the Rohingya death toll is not limited to wild-eyed terrorists rushing suicidally at soldiers.

The plight of the Rohingya, already among the world’s most tormented groups, appears to grow increasingly dire.

About 10 percent of the population of approximately 1 million already lives in bleak internment camps controlled by the army. Food and medicine is scarce. Travel outside is restricted. Hunger is rampant.

As for the nation’s much-celebrated pro-democracy crowd that swirls around Myanmar’s iconic, de facto leader, Aung San Suu Kyi? They have seemed largely dismissive of Rohingya woes for years.

The emergence of inept militants, vowing to liberate their Rohingya people, has only legitimized the public’s distrust of Muslims. But there are signs that their tragedy could worsen from here.

Myanmar’s government now plans to arm and train an all-Buddhist militia in the same state the Rohingya inhabit. This new armed wing would be composed of ethnic Arakanese, Buddhists who are also native to the area.

One international monitoring group, the International Commission of Jurists, has called this a “recipe for disaster.” But the plan is favored by one of the loudest anti-Rohingya organizations, the Arakan National Party, which favors “inhuman acts” to rid their homeland of Muslims.

Last week, as the army stormed Muslim villages, the group found time to congratulate Donald Trump for winning the US presidential election.

“Being engulfed in Islamization and illegal immigration problems,” the party wrote, “we the Arakanese people look up to you as a new world leader who will change the rigged system being infested with jihadi infiltrators.”

Public Radio International (PRI) is a global non-profit media company focused on the intersection of journalism and engagement to effect positive change in people’s lives.  We create a more informed, empathetic and connected world by sharing powerful stories, encouraging exploration, connecting people and cultures, and creating opportunities to help people take informed action on stories that inspire them.  Its mission is to serve audiences as a distinctive content source for information, insights and cultural experiences essential to living in our diverse, interconnected world.  Founded in 1983, PRI audio, text and visual content is currently consumed by almost 19 million people each month.