The ‘Ethnic Cleansing’ of Myanmar’s Rohingya Community Is Underway 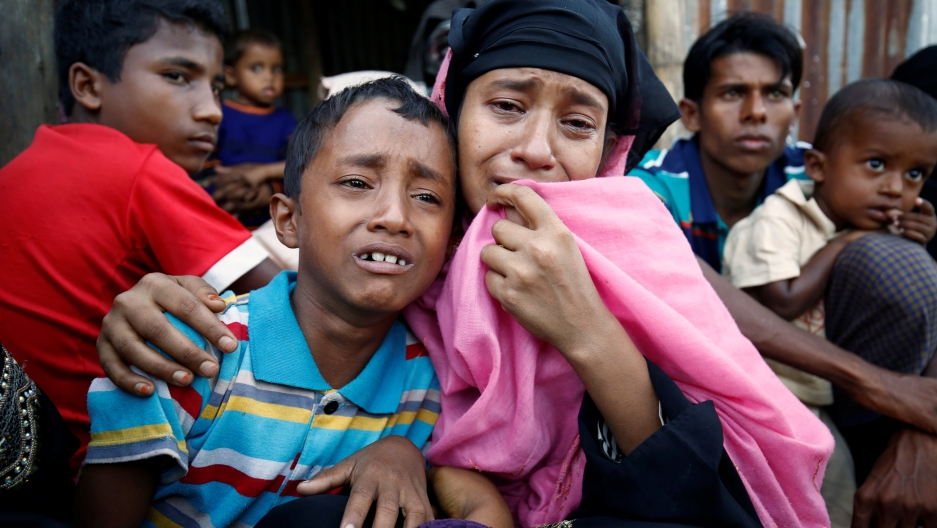 A Rohingya mother and her son weep at a border checkpoint into Bangladesh. Thousands have crossed the border to escape the violence.
Mohammad Ponir Hossain/Reuters

Myanmar, formerly known as Burma, is often seen as a place of military rule, gradually moving towards democracy. But in recent weeks, a new story has emerged: what one UN official called the “ethnic cleansing” of a religious minority.

8 Dec 2016 – Refugees fleeing the affected areas have told horrendous stories of rapes, killings and house burnings. These claims are denied by the government.

Following a military crackdown, at least 10,000 members of the Rohingya Muslim minority have fled their homes. John McKissick, head of the UN High Commission for Refugees in the Bangladeshi border town of Cox’s Bazar, told the BBC that Myanmar was involved in “ethnic cleansing” of the Rohingyas. The military campaign was retaliation for attacks by Rohingya insurgents.

The Rohingya community is Muslim and has linguistic and cultural links to neighboring Bangladesh. The vast majority of Myanmar’s population is Buddhist.

The government has banned journalists from entering Rakhine state, where most of the atrocities are believed to be happening. But members of the Rohingya community have recorded the testimonies of women who claim to have been raped and have witnessed the killings of male relatives. Refugees arriving in Bangladesh have made similar claims about atrocities being committed in Rohingya villages.

According to journalist Mobeen Azhar, who recently returned from Myanmar, hostility towards the Rohingya is driven by a fear of Islamicization and a growth in Buddhist nationalism. “This Buddhist nationalism is a relatively new phenomenon in Myanmar, and it is gaining a lot of traction,” he said. “It reflects the international situation where a lot of minority groups are being scapegoated. Many average citizens of Myanmar are facing hardship, and many are living in poverty.”

The Burmese government has so far denied any wrongdoing. Myanmar’s civilian leader, Nobel Peace Prize-winner, Aung San Suu Kyi, has said the media has misunderstood the situation. She told Singapore’s Channel News Asia that “It doesn’t help if everybody is just concentrating on the negative side of the situation, in spite of the fact that there were attacks against police outposts.”