Resistance won’t stop, and starting Jan. 2, dissatisfied investors will have the option of pulling out of the controversial, money-losing project. 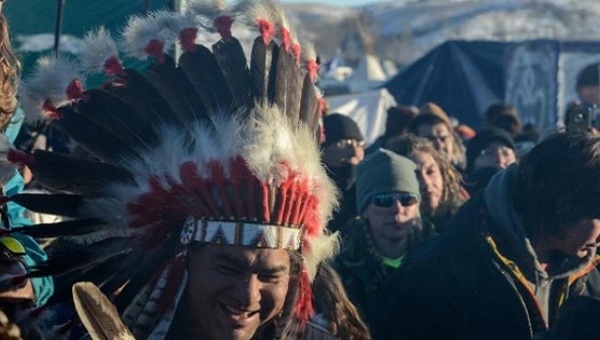 11 Dec 2016 – Another victory came for demonstrators against the Dakota Access pipeline this Friday [9 Dec] when a federal judge denied the company’s request to force the federal government to approve the controversial 1,172-mile pipeline’s final easement.

But while U.S. District Judge James Boasberg denied Energy Transfer Partners any help in overturning the Army Corps of Engineer’s decision to halt construction, he left the door open for revisiting the issue next year.

RELATED: 5 Things You Need to Know After Victory for DAPL Resistance

While the decision certainly helps the thousands of demonstrators who have poured onto North Dakota in the last few months to stop the project, which would traverse Standing Rock Sioux tribe’s ancestral lands, many are taking the announcement with cautious optimism.

“There is still a fight to come. This is not the end. As we have seen, they will do anything to get their way. It’s like a spoiled child throwing a tantrum,” Ladonna Brave Bull Eller, a Standing Rock Sioux tribal leader, told TYT Politics. “I hope that they follow the law. I hope we can go into court and…that justice will prevail. But we must stand vigilant to make sure it happens.”

Since the Obama administration halted the pipeline last Sunday, the company has threatened to go ahead with construction, decrying the government’s decision as a “political action.”

“As stated all along, ETP and (Sunoco Logistics Partners) are fully committed to ensuring that this vital project is brought to completion and fully expect to complete construction of the pipeline without any additional rerouting in and around Lake Oahe. Nothing this Administration has done today changes that in any way,” a company statement read.

It’s also not the first time the comapny turns to the courts for help. In November, ETP again asked federal courts to step in and “end the Administration’s political interference in the Dakota Access Pipeline review process,” according to a statement by the company. That ruling is still pending.

While the Friday decision does not put a final nail in the coffin, it still is of advantage to the demonstrators. Since there is a clause in the company’s contract that allows investors to pull out starting Jan. 2, further delays – which the company estimates cause a loss of $20 million per day – could see many investors turning their back on the money-losing project.

Of course, that is also not set in stone, as the incoming Trump administration – which has already announced its support for the pipeline – could overturn the Army Corps of Engineers’ decision.

Standing Rock Sioux tribe members and the Army Corps of Engineers have until Jan. 6, 2017 to hand in their reasons for opposition. ETP has until Jan. 31 to respond to those claims, after which the government and tribes will have 10 days to come back with their arguments. A full hearing on the motion will likely come in February, the judge said.

Still, whether it’s inside or outside of the courts, and despite freezing weather, demonstrators at Standing Rock are remaining strong.

“I do believe they’re going to (continue to) try,” said Eller. So “I do believe we’ll be standing here in prayer and civil disobedience and nonviolent resistance. I hope they understand the world is watching now. They have to learn to live a better way in protecting the water, the land the resources. We cannot continue with this.”