Obama’s Stellar Effort to Preserve Our Cultural Heritage in Syria

13 Jan 2017 – President Obama’s Syria legacy is already being widely debated. In 2009 the former Southside Chicago community organizer and Law Professor entered the White House promising a new direction and vision in the Middle East from that of his predecessor and pledging “a new way forward.” “A New Beginning” is the name of the speech he delivered on 4 June 2009, at Cairo University.

Surely things seemed much simpler at the time when millions across the Middle East praised his words. But alas, Obama soon stumbled into a raging turbulent of complicated problems from the “Arab Spring” and the arrival of ISIS and the Islamic State, to a massive proxy war in Syria, with the involvement of proxy backed sectarian militia from half a dozen countries and as many as 1000 other militia/gangs of “jihadists” from another forty or more.

Plus the resurgence of Russia as a regional power along with Iran’s ascendance. These apparently unforeseen geostrategic developments happened fast as America appeared to become relegated to being a vexed and sidelined onlooker. Obama is accused of not responding early enough to the ISIS threat or protecting the civilian population under attack and the President himself repeated last week that Syria was his most difficult foreign policy issue that he had to face during his eight years in office.

Some are arguing that Obama is responsible for unintended consequence and creating new challenges to US and Middle East regional security.  As Obama ends his Presidency he leaves behind doubts from most of America’s allies in the region and certainly sharp disappointments and criticism from some of the displaced Syrian population that this observer has crossed paths with. “What happened to your country’s claimed humanitarian values” is a question I have been repeatedly asked by ordinary citizens over the past several years across Syria.

But the Obama legacy jury is still deliberating.

A just released study from the University of Maryland’s Program for Public Consultation (1/10/2017) found that only one in five Americans thinks that under the Obama administration the U.S. has been too engaged in the Middle East, while one in three think it has not been engaged enough. The most common view, held by 46 percent of those surveyed is that the level of engagement has been about right under President Obama. And 57 per cent of Americans told interviewers last weekend that they view Obama favorably, putting him way ahead of his predecessor, George W. Bush who only 40 per cent viewed favorably as he left office.

Time will tell how Obama’s Middle East legacy is judged and no doubt the verdict will be affected by what President-elect Trump will do in the Middle East, which as of today has many of us scratching our heads.

But there is one major, if not widely heralded, Obama Administration achievement which relates to Syria and the Middle East that has not gained much public recognition but for which the Obama Administration deserves great credit. That subject is Obama’s leadership and achievements, working with a divided Congress, in taking new and concrete measures with respect to Protecting and Preserving Syria’s Endangered Heritage which we all share as our common cradle of Civilization.

The Obama Administration has been the most focused on preserving archeology in Syria and elsewhere than any of his predecessors. His administration, like many of us, realized as we witnessed the destruction of our shared cultural heritage, that despite good intensions relevant international law so far is largely ineffective in preserving and protecting our heritage from ISIS and other thieves. The absence of adequate enforcement mechanisms are evident from the continuing daily destruction, looting, smuggling, and black market trading and sales of Syrian cultural property, every day around the Middle East and around the world.

Today there are reports that ISIS is now back in complete control of Palmyra due to errors by some who were guarding the priceless ruins while ignoring for months reports from locals that Daesh jihadists were back in the adjacent to the ruins town of Palmyra and gaining recruits. There are additional reports today (1/12/2016) that ISIS has begun its looting and destruction of “The Pearl of the Desert.”

As the actions of ISIS and others demonstrate, treaty-based International Humanitarian Law, which focuses on the actions and responsibilities of states, and even customary IHL, which applies more broadly to state and non-state actors alike, are frankly not effective in the current crisis to protect our heritage in Syria or elsewhere.

And National laws have also long been shown to be ineffective even through that fact may be changing as countries, including the USA, the center of illegal artifact purchases, has begun to enact laws to control and hopefully eliminate the plundering of our global heritage. The US, UK, Germany, France and several of the 28 European Union countries (27 post-Brexit) have been working domestically on various legal frameworks to confront the illegal trade of archaeological artifacts.

Last year Germany enacted for the first time a Federal law which they claim is an efficient implementation of the 1970 UNESCO Convention. Importantly the new German law provides for increased due diligence an emphasis many countries are legislating for their police agencies. Specifically, Germany now requires an export license from the country of origin and requires that the supplier in Germany conduct provenance (origin) research. What is decisive is how the law will be implemented and how German officials will be positioned to ensure due diligence.

The Obama administration has also been an international leader in pushing the due diligence model and encouraging other UN Members to follow suit.

The White House increased its signing into law protections for our shared cultural heritage and several are being considered by other nations as they consult with the USA on subjects like due diligence and coordination of policing efforts.

During the eight years of the Obama Administration, it has pushed the Department of Homeland Security (DHS) to recover and return more than 7,500 illicit artifacts to thirty countries as part of its fight against the global trafficking of cultural heritage. The Obama administration is keenly aware that restituting stolen properties while an important goal, only occasionally leads to successful prosecution, conviction, or imprisonment of antiquities traffickers. But it has not been deterred. 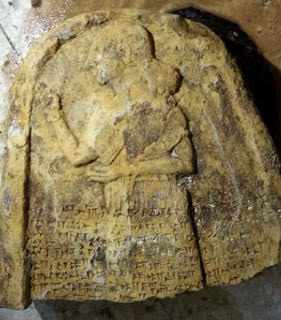 One of four artifacts from Syria targeted by the Obama Administration for forfeiture, featured in a photo found in the possession of Abu Sayyaf, former President of the Islamic State’s (ISIS) Antiquities Marketing Department.
Photo credit: US Department of Justice

For this reason Obama’s Department of Justice (DOJ) is increasingly taking concrete action against this illegal trade, and with a minimum investment of resources and as it leaves office much work has been done toward appointing specially designated prosecutors at United States Attorneys’ Offices and Main Justice who can bring criminal cases against antiquities traffickers, the DOJ has the capacity to secure the convictions and sentences needed to end impunity for these crimes while providing both general and specific deterrence against future offenses.

After a long investigation, last month New York antiquities dealer Nancy Wiener, a reported second-cousin of the serial sexter and former Congressman, Anthony Weiner, was charged with three felony offenses. The most serious includes Criminal Possession of Stolen Property in First Degree – NY PL § 165.54. The statute recites that “a person is guilty of criminal possession of stolen property in the first degree when he knowingly possesses stolen property, with intent to benefit himself or a person other than an owner thereof or to impede the recovery by an owner, and when the value of the property exceeds one million dollars.” The offense is punishable by up to 25 years in prison. Homeland Security Investigations (HSI) in partnership with the Manhattan District Attorney’s Office seized numerous stolen and looted artifacts from the Nancy Weiner’s Gallery on Manhattan’s East Side.

Obama’s DOJ already has a roadmap template in hand with its Environmental Crimes Section (ECS), whose successful prosecutions of wildlife traffickers demonstrate a tested model. Also under consideration is a similar office of Cultural Heritage Crimes (CHC) whereby Prosecutors could hold antiquities traffickers accountable, to disrupt and dismantle their networks, and to give support to police and prosecutors at the local, county, state, and federal levels.

During his recent visit to The Met, Hollande explained that the idea for the fund actually originated in Japan this past May when he was with President Barack Obama at the G7 summit. Hollande’s remarks followed an introduction made by Vice President Joe Biden who supports this initiative as does Secretary of State John Kerry.

At the urging of the Obama Administration, the G7 published last year an Action Plan on Countering Terrorism and Violent Extremism, calling on nations “to enhance efforts to hinder looting and trafficking of cultural property originating from regions under the control of terrorist groups.”

Biden’s surprise appearance at The Met was meant to signal White House efforts to protect and to preserve cultural heritage. Biden described ISIS’s sale of artifacts from Syria to fund terrorism while ISIS simultaneously attacking cultural diversity in the Middle East, which he called an affront to the people of the region. Biden asserted that trafficking laws targeting antiquities are being rigorously enforced by the Obama Administration.

Clearly, much more work urgently needs to be done. One key solution being discussed in Washington to help bring antiquities traffickers to justice is the assignment of a team of prosecutors focused on Cultural Heritage Crimes (CHC). Some in the Obama administration suggest that this CHC Team could be assembled in the same way that the Department of Justice (DOJ) targets narcotics, gangs, child exploitation, and other topic-specific crimes.

Some cultural property legal watchers including Ricardo St.Clair, a blogger of the subject, are encouraging the DOJ’s reliance on the Bush Administration post 9/11 US Patriot Act despite its critics for reasons involving abuses of human rights. The fact that Obama Administration lawyers have used the anti-terrorism statute to form the cornerstone of some cases against looting artifact suppliers and sellers showcases the Patriot Act as a promising legal tool to combat transnational antiquities trafficking. It also offers a legal argument that demonstrates a nexus between terrorist activities and antiquities trafficking.

Section 806 of the Act created sweeping language in 18 USC § 981(a)(1)(G)(i) to deprive terrorists of a wide range of assets, similar to the Racketeer Influenced and Corrupt Organization Act’s (RICO) broad forfeiture provisions found at 18 USC § 1963(a)(2)(D).

The cultural heritage law enforcement achievements of the Obama Administration must not be dismantled by the Trump Administration.

Anticopyright: Editorials and articles originated on TMS may be freely reprinted, disseminated, translated and used as background material, provided an acknowledgement and link to the source, TMS: Obama’s Stellar Effort to Preserve Our Cultural Heritage in Syria, is included. Thank you.