Standing Rock and the Return of the Nonviolent Campaign

There’s something even better than electoral politics and one-off protests when mobilizing citizen power. 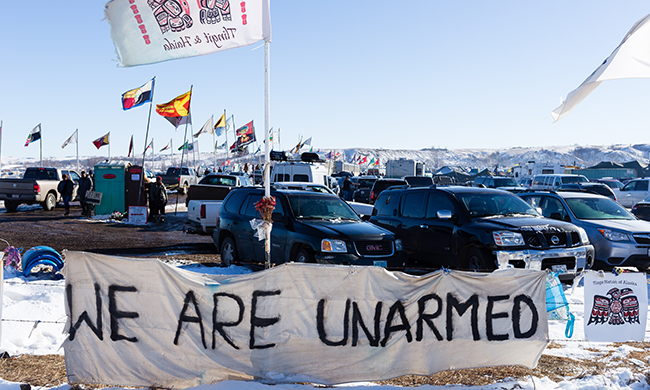 The encampments at Standing Rock worked to keep prayer and nonviolence at the center of their actions.
Photo by Joe Zummo.

6 Jan 2017 – Nonviolent campaigns are often dramatic and catch the attention of millions—think of Standing Rock water protectors resolute in the face of a brutal police force. All the more puzzling that the concept of a “nonviolent campaign” is little known and often ignored when people talk about how to mobilize power, for example, to prevent Donald Trump from erasing gains made in addressing climate change.

Nonviolent campaigns are often dramatic and catch the attention of millions.

For many, the choices are limited to lobbying, petitions, and looking for promising progressive candidates to run a different kind of campaign—the electoral campaign. Thinking outside that box usually means a one-off march or rally, or possibly a protest. The trouble is, a nonviolent march or rally or protest is not nearly as effective as a nonviolent campaign. One or two of those actions could not have the impact of the enduring Standing Rock campaign.

What marks a nonviolent campaign?

Swarthmore College researchers have been digging into that question, analyzing over 1,000 nonviolent campaigns waged in almost 200 countries. Swarthmore’s publicly available database goes back historically to 12th century Egypt, when laborers building a tomb for the Pharaoh successfully campaigned for wages that were being unfairly withheld. The researchers found protests are usually one-off events that express grief, outrage, or plain opposition to an action or policy, and if the protest gets attention, it may be repeated. Campaigners, by contrast, carry out a strategy over time. They plan a series of nonviolent actions that continues until the goal is reached. That may be a matter of weeks, or months, or years.

When Earth Quaker Action Team reached year three of its campaign to induce PNC Bank, the nation’s seventh largest, to stop financing mountaintop removal coal mining in Appalachia, the members of EQAT began to tire. They researched the Swarthmore database and discovered that the British campaign to force Barclays bank to divest from apartheid in South Africa took 20 years to succeed. The Barclays campaign gave EQAT fresh perspective on endurance. Two years later, the group won its “Bank Like Appalachia Matters” campaign.

True, many campaigns are resolved in a much shorter time. America’s earliest recorded nonviolent campaign was in colonial Jamestown, Virginia, when Polish artisans—the first non-English settlers—campaigned for the right to vote equally with the English. The Poles won their demand in three months.

The Allegany County Nonviolent Action Group in New York won its 1990 campaign to prevent a nuclear waste dump from being built there in less than a year. Citizens in Bodega Bay, California, with the help of Berkeley students and folksinger Malvina Reynolds, needed two years to cancel a plan to build the nation’s first commercially viable nuclear power plant. In 1964, campaigners in Los Angeles won cancellation of a planned Malibu plant as well.

Campaigns have specific demands and targets

Nonviolent campaigners know what they want: clean water in North Dakota for indigenous people; the Dream Act for students brought to this country as children by undocumented immigrants; a cleanup of chemicals at Love Canal in upstate New York; university goods and clothing made by workers who are treated fairly with safe working conditions.

Campaigners also know who can make the decision they need. Alice Paul led the National Woman’s Party campaign for suffrage and targeted President Woodrow Wilson. As the film Iron Jawed Angels reveals, the women demonstrating during World War I compared the president to the German emperor, calling him “Kaiser Wilson!” In her later years, when I interviewed Alice Paul, she said she was confident that Wilson could make the difference in persuading a balky Congress to pass the 19th Amendment, giving women the right to vote. She was right. Her 1917 escalation of the campaign brought voting to women just three years later.

Escalation is an art

The 1960s civil rights movement showed expertise in locating and sequencing direct actions to escalate pressure on their target.

When President John F. Kennedy refused Martin Luther King Jr.’s request to provide leadership for a civil rights bill, the Southern Christian Leadership Conference made an unusual strategic decision. Instead of taking the obvious next step of focusing action in the nation’s capital in order to gain victory there, the SCLC decided to escalate in Birmingham, Alabama, at that time a major industrial city. It was where the Rev. Fred Shuttlesworth, a member of SCLC, had for years led an ongoing antisegregation campaign.

In spring 1963, SCLC brought additional organizers and trainers to Birmingham to join the local struggle. Campaigners escalated their tactics, confronting the segregationists’ police dogs and fire hoses with nonviolent discipline. When mass jail-ins left a scarcity of adults available for civil disobedience, children stepped in to fill the streets. The sheer volume of disruption dislocating Birmingham and the national charisma of Dr. King effectively pressured the White House. Kennedy reportedly got on the phone with U.S. Steel President Roger Blough and others of the power elite, gaining agreement that the time had come for a national civil rights bill that would guarantee equal accommodations.

The civil rights struggle also illustrates the way campaigns build mass social movements. On Feb. 1, 1960, just four college students initiated a sit-in campaign at a segregated lunch counter near their campus in North Carolina. Inspired, students at other campuses followed suit. Within a month there were student sit-ins throughout the South and a solidarity campaign at Woolworth stores in northern cities as well. Multiple, replicated local campaigns turned a few students’ efforts into the widespread and iconic “freedom movement.”

When Gandhi faced the largest empire the world had ever known, he knew that India would need a massive movement to sustain protracted struggle and gain independence. Initially, he believed that his people were too disunited and disheartened to forge such a movement. So he led a series of campaigns, using them to win smaller demands, build leadership and organizing skills, and develop the necessary self-confidence. The campaigns eventually built a large-enough national movement to wage the famous Salt March of 1930–31, which in turn increased the size of the growing movement by supporting more, smaller campaigns involving still more people. A little more than a decade later, critical mass forced the British to give up the prize jewel of their empire.

The obsession of the U.S. mainstream media is electoral campaigning. In Denmark, a national political campaign is limited to six weeks and paid advertising is not allowed on TV. Danish voter participation is much higher than in the U.S. Mass media have a small window in which to present and clarify the issue differences among the parties and candidates. They do that efficiently.

In the United States, media bombard citizens for at least a year with the horse-race dimension of elections. People may not learn much about the issues, but they do gain a sense of how a political campaign works, including strategy.

Our choices are not limited to petitioning politicians or staging a protest.

By contrast, no one hears how nonviolent campaigns won or what their strategic choices were. Context is absent: What mainstream media source gives us that kind of context about Standing Rock, comparing it with other campaigns waged by indigenous groups for their tribal and environmental rights? When do we hear academic experts on nonviolent struggle explain the dynamics behind breaking news in a nonviolent campaign?

The result is a public ill-informed about its options when facing an authoritarian president or a wave of policy changes that diminish human rights and planetary sustainability.

The good news is the reemerging art of the nonviolent campaign. Our choices are not limited to petitioning politicians or staging a protest. Instead, we can start something big.

George Lakey co-founded Earth Quaker Action Group, which just won its five-year campaign to force a major U.S. bank to give up financing mountaintop removal coal mining. Along with college teaching, he has led 1,500 workshops on five continents and led activist projects on local, national, and international levels. Among many other books and articles, he is author of Strategizing for a Living Revolution in David Solnit’s book Globalize Liberation (City Lights, 2004). His first arrest was for a civil rights sit-in and most recent was with Earth Quaker Action Team while protesting mountain top removal coal mining. Lakey designed the Global Nonviolent Action Database while a professor at Swarthmore College. In his new book he tells the story of nonviolent campaigns bringing economic justice to Norway and Sweden: Viking Economics: How the Scandinavians Got It Right—and How We Can, Too, Melville House, 2016.