For the first time, private companies were charged with crimes against humanity as part of the transitional justice system. 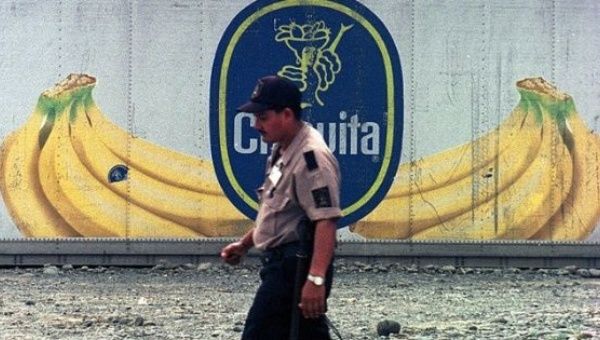 The U.S. based Chiquita company has been heavily embroiled with the scandal.
Photo: Reuters

RELATED: Will Trump Double Down on Drug War Capitalism with Plan Colombia?

On Thursday, the Prosecutor General’s Office announced that for the first time private companies were charged with crimes against humanity as part of the justice system put in place as Colombia makes its transition to peace after more than 50 years of war between the government and Revolutionary Armed Forces of Colombia, or FARC.

As part of the transitional justice model, FARC members, as well as thousands of civilians, companies and government officials have been accused of war-related crimes.

The so-called “Banana Block” was an umbrella organization of the United Self Defense Forces of Colombia, or AUC, and controlled territory in the area to protect the banana producers

One of the most feared paramilitary groups in the country, the AUC was deemed a terrorist organization by the Colombian government and disbanded in 2006. The group was responsible for a number of massacres, human rights abuses, kidnappings and extortions that resulted in the displacement of thousands of Colombians.

Alvaro Uribe, former Colombian president and major critic of the peace deal, had supported the formation of legal self-defense organizations.

According to the Prosecutor General’s Office, the funding for the Banana Block was funneled through Convivir Papagayo group, which was given legal certification under Uribe’s plan.

Other high profile companies, including Coca-Cola, Colombia’s largest beverage company Postobon, cement company Cementos Argos and state oil company Ecopetrol, have been accused of financing death squads through what is commonly referred to as the “para-economy.”