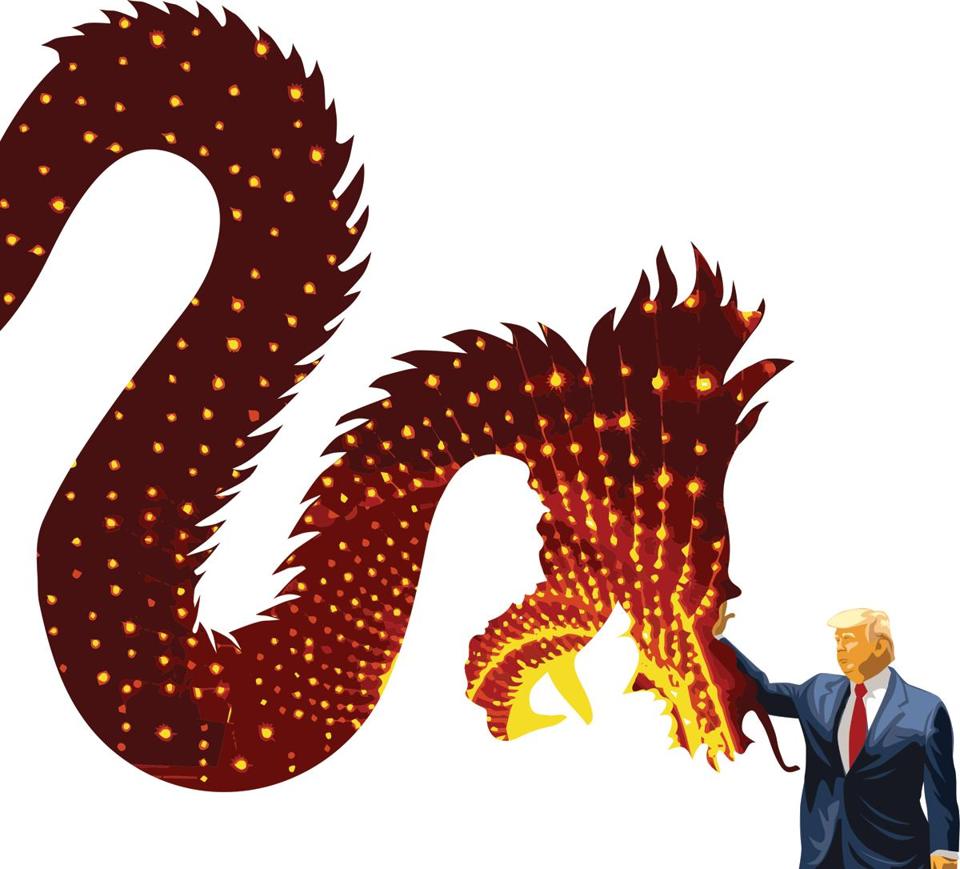 Daniel Hertzberg for the Boston Globe

5 Feb 2017 – Today’s China offers a rude awakening for Americans who believe that the United States and the United States alone should dominate world power. Donald Trump seems to count himself among these neoconservatives, and China is their deepest phobia today. Trump is following a game plan that has characterized US “grand strategy” against major rivals dating back to World War II. Each time America has had a rival for global leadership, the United States has aimed to cut the rival down to size and to subordinate it to US power. For a while it worked, at least to a point.

More recently, it has failed badly. And with China, any attempt to pursue such a course will fail disastrously for the United States, not to mention the world. The United States’ grand strategy of primacy can be dated to the early years of World War II. America’s main ally at the time was Britain. When Winston Churchill called on the new world to save the old world from Hitler, Franklin Roosevelt’s answer was yes, certainly, but not to save the British empire (or the French empire). America loaned Britain the funds and arms to help defeat Hitler, but tightened the financial knot during and after the war to make sure that Britain would be financially dependent on the United States. Famously, it was America and not Britain that wrote the postwar rules of global finance to ensure that the world’s leading creditor nation, the United States, would hold all of the cards against the debtor nations, then including Britain, France, and the defeated powers.

At the end of the war, the British and French empires relinquished their colonies in the face of independence movements and to rescue their own home economies. At that point, the United States took up the contest against another potential rival, the Soviet Union. From the start of the Cold War, the United States was far more developed economically and technologically than the Soviet Union. Yet because the Soviet Union was ready to devote a crushing share of national resources to its military-industrial complex, it was able to make itself a true rival of the United States in military terms. The ensuing arms race was almost enough to end the world during the 1962 Cuban Missile Crisis and other harrowing occasions.

Both the United States and the Soviet Union lost several real opportunities to halt the arms race, and hotheads and militarists on both sides nearly got the whole world killed. Probably the best opportunity to end the Cold War came with John F. Kennedy’s peace initiative in 1963 that led to the signing of the Partial Nuclear Test Ban Treaty. Some think that right-wingers took such offense to JFK’s peace initiative that Kennedy was assassinated as a result; there is real plausibility to that view.

In the end, Mikhail Gorbachev decided that the Soviet people deserved a higher quality of life instead of an economically crushing arms race. American neoconservatives claim that Ronald Reagan’s renewed arms buildup in the early 1980s pushed Gorbachev to realize that the Soviet Union was doomed to lose the arms race. Whether or not that’s the case, Gorbachev’s decision to disarm, and also not to crack down on growing discontent, led to the dissolution of the Soviet Union, at the end of 1991.

Neoconservatives took the lesson to be that the United States was unrivaled in power and could impose its will on any country it deemed hostile to US interests. The United States pursued two tracks of this strategy. The first was to push NATO eastward toward the Russian borders, by incorporating the Eastern European and Baltic countries into the US-led military alliance, and then aiming to incorporate Ukraine and Georgia as well. The second was to overthrow, or try to overthrow, several hostile governments in the Middle East, including Afghanistan, Iraq, Libya, and Syria in short order.

Both of these approaches have backfired badly. NATO’s move around 2008 to bring Ukraine and Georgia eventually into NATO helped to trigger a war in Georgia and Russia’s seizure of Crimea. And the US wars of regime change in the Middle East since 1990 have been strategic failures, fomenting new instability and terrorism rather than friendly and stable regimes.

In the 1970s, the United States briefly faced what it believed to be yet another major rival for economic power, Japan. Japan’s post-WWII recovery was so dynamic, and its mastery of the new transistor-based electronics so strong in the 960s, that many business and economic gurus in the 1970s envisioned a future world economy dominated by Japanese companies and wealth. I remember studies in the early 1980s that naively extrapolated Japan’s rapid growth and high saving rates forward for several decades to argue that the United States would be the sure loser in the long-run competition with Japan.

Starting with President Ronald Reagan, the US foreign policy establishment went to work to counter Japan. It began accusing Japan of unfair trade practices, currency manipulation, unfair state aid to Japan’s businesses, and other exaggerated or flat-out false claims of nefarious behavior. The United States began to impose new trade barriers and forced Japan to agree to “voluntary” export restraints to limit its booming exports to the United States. Then, in 1985, the United States struck harder, by insisting that Japan massively revalue (strengthen) the yen in a manner that would leave Japan far less competitive with the United States. The yen doubled in strength, from 260 yen per dollar in 1985 to 130 yen per dollar in 1990. Japan had been pushed by the United States to price itself out of the world market. By the early 1990s, Japan’s export growth collapsed and Japan entered two decades of stagnation. On many occasions after 1990, I asked senior Japanese officials why Japan didn’t devalue the yen to restart growth. The most convincing answer was that the United States wouldn’t let Japan do it.

Now comes China. American primacists are beside themselves that China seems to have the audacity to poke its nose into “the American Century.” Time Editor Henry Luce famously proclaimed the American Century in 1941, and it proved to be a remarkably astute observation and captivating, even mesmerizing, phrase for many Americans. The United States did become by far the world’s most powerful and richest country. And during several decades it often used its power and wealth wisely: founding the United Nations, creating the IMF and World Bank, establishing open trade with much of the world, inventing foreign aid and the Peace Corps, financing the global battle against AIDS.

But now China seems to be crowding the US primacy well before the American Century reaches 100. And China is doing this as a surprise entrant to the race, at least a surprise from the 20th-century perspective, making its recent rise even more unnerving to American primacists. Consider the Chinese economy as recently at 1980. For that year, the IMF estimates that China’s total GDP was a tiny 2.3 percent of the world economy, compared with America’s share, at 21.9 percent. China’s per capita GDP was a minuscule 2.4 percent of the US per capita GDP. Fast forward 37 years. The IMF now calculates that China accounts for 18.3 percent of world output compared with 15.4 percent of the United States. China’s output per person is now around 39 percent of America’s output per person according to the same IMF measurements.

Many American primacists can’t believe their eyes. Some argue that China’s economy is a giant bubble that will soon implode, following the way of the Soviet Union. This is not the case. The Soviet economy was technologically separated from the US-led trading system and, in the end, could not keep up. China, by contrast, has achieved its remarkable economic growth since 1980 precisely by adopting global technologies and integrating the Chinese economy closely with the world economy. China has also become a highly innovative economy as well.

Rather than let China catch up, the primacists say, the United States should badger and harass China economically, engage the Chinese in a new arms race, and even undermine the one-China policy that has been the basis of US-China bilateral relations, so that China ends up in economic retreat, retracing the steps of the British Empire, the Soviet Union, and Japan. One theory making the rounds indeed holds that Trump wants to sidle up to Vladimir Putin to team up against China for just this purpose.

In my view, such an approach toward China would be profoundly misguided and very dangerous. It is based on the false idea that global economics must be about winners versus losers, the United States versus China, rather than about mutual gains through trade and technological advance. Moreover, the idea of cornering China is not only unwise but unachievable.

Trump blames China for the plight of American workers left unemployed by China’s exports to the United States, but he fails to understand or acknowledge the many gains to the United States from our trade with China, including the higher profits and wages of US companies exporting to China and the lower costs enjoyed by US consumers of China’s exports. If Trump really wants to help American workers, he should tax and redistribute the soaring US profits and incomes of the rich, rather than open a trade war with China.

China, by contrast, has a larger economy, is four times more populous, and is America’s creditor, not its debtor. China has strong and growing trade, investment, and diplomatic relations with other countries all over the world that would likely be strengthened, not weakened, by US belligerence. It’s also important to remember that China’s proud history as a unified nation is 10 times longer than America’s, around 2,250 years compared with around 225 years.

Aside from the usual litany of exaggerated or false charges against China (currency manipulator, unfair trader, etc.), the most recent rap is that China is a dangerously expansionist power. If ever the pot has called the kettle black, here is a case. America has military bases in roughly 70 foreign countries, while China has one small overseas base (in Djibouti). America outspends China on the military by more than two to one. For decades, America has been in nonstop overseas wars and regime-change operations, while China has been in very few overseas conflicts, all short-lived. China, in short, has not been an expansionist or aggressive power, while the United States has sought unrivaled global power.

While the United States cannot dominate China, it need not fear China’s dominance either. Yes, China is now larger economically than the United States, and will remain so, but the United States also remains far richer in per capita terms and will likely continue to be so throughout the 21st century. Moreover, China’s high growth rates are now slowing markedly, not because the Chinese economy is collapsing but because it is maturing. “Catching-up” growth slows down as it succeeds. Also, China is aging rapidly, and will have a median age above 50 years by mid-century. A mature, aging, and slower-growing economy that is still much poorer than the United States in per capita terms is hardly a deep threat to America’s own security.

If Trump tries to provoke China into a new arms race or trade war, the results will be a huge debacle for the United States and a potential threat for the world. America’s well-being depends on the maturity of judgment to cooperate with China as a major global power that can and should share the responsibilities to promote global peace and sustainable development. Working together through the United Nations, China and the United States can and should work together and with other countries to prevent or end regional wars, stop terrorism, and confront common hazards such as global warming and newly emerging diseases.