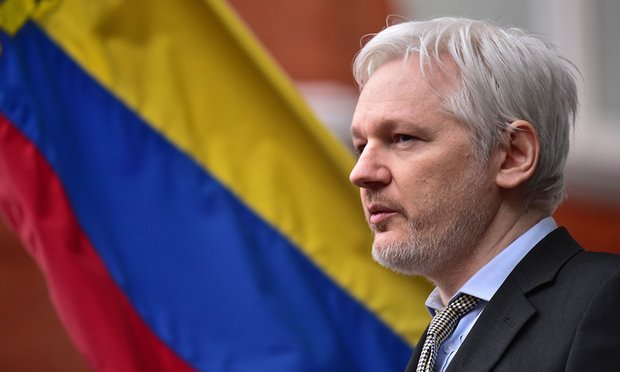 Julian Assange: the Ecuadorian foreign minister describes his confinement to the first floor of the London embassy as like ‘something out of a John le Carré novel’. Photograph: Dominic Lipinski/PA

9 Feb 2017 – Julian Assange will be given a month’s notice to leave the Ecuadorian embassy if the country’s main opposition candidate wins the presidency in next week’s election.

In an interview with the Guardian, Guillermo Lasso, of the rightwing Creo-Suma alliance, said it was time for the WikiLeaks founder to move on because his asylum was expensive and no longer justified.

“The Ecuadorian people have been paying a cost that we should not have to bear,” he said during an interview in Quito. “We will cordially ask Señor Assange to leave within 30 days of assuming a mandate.”

That possibility is still some way off. In the most recent poll, Lasso is seven points behind the ruling party candidate Lenín Moreno, but the former banker has been gaining ground ahead of the first round of voting on 19 February and is widely tipped to force a runoff.

Even if there is no change in power in Quito, however, it seems increasingly likely that Assange will soon be moving from the cramped embassy in Knightsbridge that has been his refuge for more than four and a half years.

Although the current government has maintained its position of solidarity, all involved have grown increasingly frustrated with a situation that Ecuador’s top diplomat described as “something out of a John le Carré novel”.

“Our staff have been through a lot. There is a human cost,” said the foreign minister, Guillaume Long. “This is probably the most watched embassy on the planet.”

British police and intelligence have kept the embassy under close surveillance since Ecuador granted asylum in June 2012 to prevent Assange’s extradition to Sweden for questioning about a sexual assault accusation.

The South American country accepts the WikiLeaks leader’s argument that the Swedish extradition request was a ruse aimed at eventually getting him into US jurisdiction, where he said he would face political persecution and mistreatment similar to that suffered by whistleblower Chelsea Manning.

Since then, he has not left the building, which has given him less scope for movement than that of many convicted prisoners.

“It’s a very precarious position,” Long said. “In terms of his physical comfort we have done all we can … But there is no access to an outside space. There is no patio or garden so he has mostly spent four and a half years on the first floor of a building in London, where there is not much light, especially in winter.”

Assange occupies one of four office rooms in the embassy. Although he has described a family-like relationship with the staff and gets frequent visits from celebrity supporters, tensions occasionally emerge.

During the US presidential election, the foreign ministry temporarily cut its guest’s internet access after WikiLeaks acted as a conduit for leaked emails from the Democratic National Committee and Hillary Clinton’s campaign adviser. This suspension followed verbal warnings.

“We wanted to be clear that our sovereign space was not being used for interference in the election of another country,” Long explained.

The foreign minister expressed sympathy for Assange, but also frustration at the slow pace of judicial negotiations with Sweden and the punitive stance of the UK government, which has cut many bilateral ties and is suspected of a hand in the unusually frequent breakdowns of the embassy’s telephone and broadband systems.

But after a long standstill, things have picked up pace. Last November, Assange was interviewed in the Ecuadorian embassy in the presence of a Swedish prosecutor.

In January – after Barack Obama’s decision to release Manning – Assange restated his willingness to face justice in the US if his rights were respected.

For the Ecuadorian foreign minister, the goodbye cannot come too soon. “We would like the next step to be tomorrow,” he said and called for the Swedish courts to accelerate matters. “We hope they are as swift as possible because this has been going on for far too long.”