Official Text: Proclamation of Latin America and Caribbean as a Zone of Peace 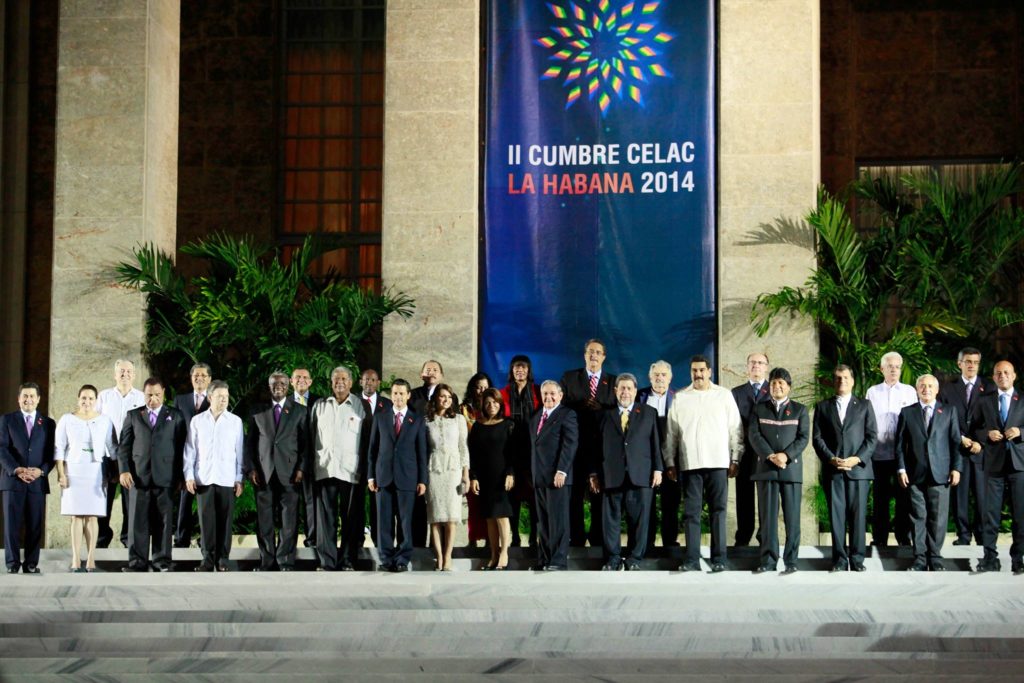 The Heads of State and Government of the Community of Latin American and Caribbean States (CELAC) gathered in Havana, Cuba on January 28 and 29, 2014 at the Second Summit, on behalf of their peoples and faithfully interpreting their hopes and aspirations,

Reaffirming the commitment of member countries with the Purposes and Principles enshrined in the United Nations Charter and International Law, and aware of the fact that prosperity and stability in the region contribute to international peace and security,

Reaffirming that integration consolidates the vision of a fair International order based on the  right  to  peace  and  a  culture  of  peace,  which  excludes  the  use  of  force  and non-legitimate means of defense, such as weapons of mass destruction and nuclear weapons in particular,

Highlighting the relevance of the Tlatelolco Treaty for the Prohibition of Nuclear Weapons in Latin America and the Caribbean establishing the first nuclear weapon free zone in a densely populated area, this being a contribution to peace and to regional and international security,

Reiterating the urgent need of General and Complete Nuclear Disarmament, as well as the commitment with the Strategic Agenda of the Organization for the Prohibition of  Nuclear  Weapons  in  Latin  America  and  the  Caribbean  (OPANAL),  adopted  by the 33 Member States of the Organization in the General Conference held in Buenos Aires in August, 2013.

Recalling the principles of peace, democracy, development and freedom underlying the actions of countries members of SICA,

Recalling the decision of UNASUR Heads of State of consolidating South America as a Zone of Peace and Cooperation,

Recalling the establishment, in 1986, of the Zone of Peace and Cooperation of the South Atlantic,

Recalling also our commitment, agreed in the Declaration of the Summit of Unity of Latin America and the Caribbean, on 23 February 2010, to promote the implementation of our own mechanisms for the for peaceful conflict resolution,

Reiterating our commitment to consolidate Latin America and the Caribbean as a Zone of Peace, in which differences between nations are peacefully settled through dialogue and negotiations or other means, fully consistent with International Law,

Cognizant also of the catastrophic global and long-term humanitarian impact of the use of nuclear weapons and other weapons of mass destruction, and the ongoing discussions on this issue,

We urge all Member States of the International Community to fully respect this Declaration in their relations with CELAC Member States.

In witness of the undersigned having duly signed this Proclamation in Havana, on the 29th day of the month of January of 2014, in a copy written in the Spanish, English, French and Portuguese languages.