The Dangers of the New Child Marriage Law in Bangladesh

This law has unimaginable impact and has the ability to change the future of millions of girls in our country. 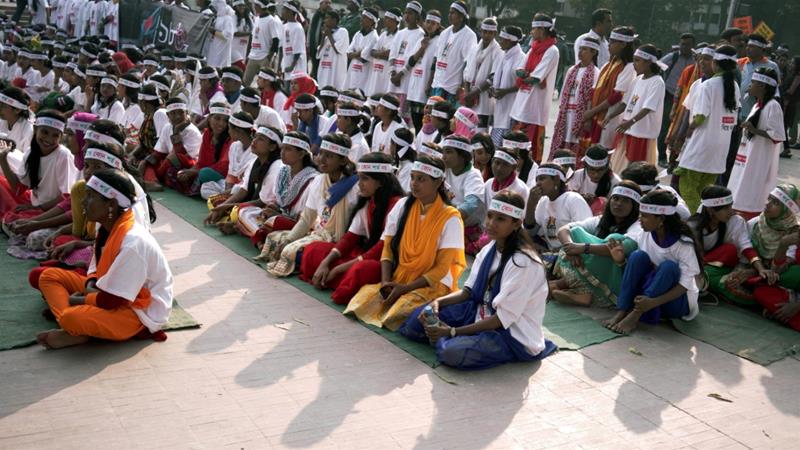 Girls attend a protest rally against the child marriage in Dhaka, Bangladesh on January 18 [EPA]

4 Mar 2017 – On February 27, the Bangladesh government passed a law that would allow for child marriage to occur in “special circumstances”. While there are many laws and acts that get enacted every day all over the globe, not all can claim to have influence over the lives of 30 million girls.

While the government maintained the legal marriage age for children (18 for girls and 21 for boys), there is a new provision in the act which would allow child marriage to take place under “special circumstances” – with parental consent and with permission from the courts, deemed in the “best interest of the underage female or male”.

The consent or permission from the child, however, is not required, and no definition of these “special circumstances” are yet given.

According to UNICEF, the number of girls who marry below the age of 18 in Bangladesh remains at about 52 percent. This number is still remarkably high, but it shows a significant decrease from 2000, when that number ranked at 65 percent.

This shows that we have made progress to reduce child marriage in our country. But now, I fear that the new child marriage law with this special provision will send us backwards, affecting progress we’ve made in the last nearly two decades.

Bangladesh has made regional and global commitments to end child marriage. The government even committed to ending all child marriage by 2041. How are we meant to achieve these goals when we will allow child marriage to occur in certain circumstances?

Members of parliament have stated that allowing girls and boys to marry in special circumstances will ensure they are not being ostracised or discriminated in communities.

Many believe that if a girl bears a child out of wedlock or is involved in sexual relations at a young age, she will be shunned or at risk if she is not able to marry.

Understanding social and cultural contexts is important, but I continue to revert back to basic human rights. The act, as it currently states, does not require the consent of the girl or boy, in order for a marriage to occur. Her parents and the court may approve if the decision is in the “best interest of the under-aged girl or boy”.

Why not ask the child? Why is his or her consent not important, or even considered?

This special provision is not only a step backwards for the eradication of child marriage in the country, but also demonstrates a harmful violation of a child’s right to be heard, informed and involved in decisions that impact on her life.

Education is the key

As one of the leading organisations committed to ending child marriage, we know that a lack of education is one of the largest drivers of child marriage. Families, guardians, and members of the community often do not know or understand the risks and consequences that child marriage has on the life of a girl or a boy.

The previous law enabled us to work with communities to prevent and stop child marriage. Working throughout the country, we have successfully stopped some 2,000 child marriages in the last three years alone and has reached around 700,000 young people.

These are now 700,000 young people who are educated and informed about the risks and consequences of child marriage, and who should be empowered – and given the opportunity – to say no to marriage.

OPINION: Ending child marriage in Bangladesh and beyond

The empowerment of young people, particularly girls, has been fundamental in addressing this ongoing problem.

Children in Bangladesh established groups called the Wedding Busters, which target parents considering marriage for their children and inform them of the risks and consequences. With the support of the old law, the Wedding Busters were empowered to alert authorities if an illegal marriage was about to take place.

In some of our working areas, we saw a drop in child marriage from 70 percent to just 20 percent. We believe that when young people take action themselves, their attitudes change and, with that, the mindset of the future generation also changes.

We have also seen local government officials champion and support these young people. Together, they are a potent force for change.

The need for socioeconomic empowerment

The key is educating families and communities about the risks and consequences, and empowering children to raise their voices and become active change-makers.

We must empower girls and boys to demand their rights to be realised, and we must not let adults – however well-meaning they may be – with their own view of what is right for the child, or the courts to become a barrier to a child’s health, development, future and potential. With rights come responsibilities.

We have seen young people take action to change things for the better. However, we as adults need to appreciate that child-bearing and homemaking does not define a girl’s life. Let us not write the future with our old hand and mind, a future that we will not even live to see.

The future of Bangladesh is vested in its young people. I will request the powers that be to appreciate that Bangladesh’s progress is tightly intertwined with fulfilling the potential of its 60 million young people, including 30 million girls.

This law has unimaginable impact and has the ability to change the future of millions of girls in our country. This is why they must have a bigger say in their future. We must not continue to decide for them.