Macri hopes to cut a deal with the U.S. to buy Argentina’s largest batch of military equipment in the last 40 years. 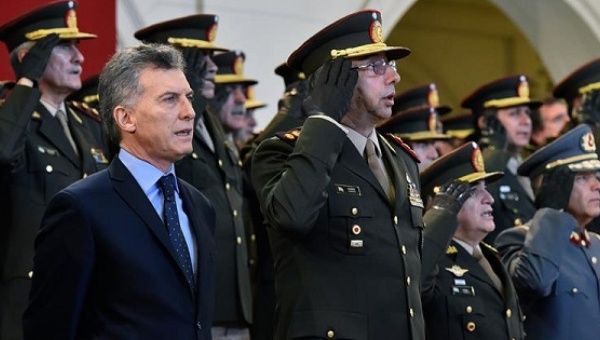 President Mauricio Macri has said that Argentina needs to update its Armed Forces for the 21st Century. | Photo: EFE

28 Mar 2017 – Argentina President Mauricio Macri is poised to dole out US$2 billion in large military equipment from the United States in what will be the biggest weapons acquisition since the country’s Malvinas War in the 1980s, according to a report by local outlet El Destape.

The government has tried to justify the largest arms acquisition of the last 40 years by saying the arsenal would help Argentina “fight terrorism.”

The report reveals that the Argentine government ordered the equipment from the United States on June 16, 2016 through the Argentine ambassador in Washington, Martin Lousteau. A letter was sent to Congressman Pete Visclosky, since the U.S. Congress must approve any arms sales abroad.

The purchase had been arranged in an earlier meeting between Visclosky and lawmakers Eduardo Amadeo and Luciano Laspina, of Macri’s governing party, the Cambiemos coalition.

The list of military supplies requested includes fighter jets, war tanks, medium and long-range missiles and helicopters. The cost, according to the report, exceeds US$2 billion over the next two years.

Also, according to the investigation, almost half of the budget for the Ministry of Defense was cut to allocate funds for the acquisition. The purchase had been approved by Macri after taking office in December 2015.

Currently, Macri and his government face harsh criticism and nationwide protests after alleging that the state didn’t have enough money to raise wages for teachers.

The announcement comes less than a week before the 35th anniversary of the beginning of Malvinas Islands war, on April 2, 1982.

Argentina has claimed sovereignty over the Malvinas Islands since 1833, when the U.K. first occupied the territory. In 1982, Argentina tried to recover the land but was met by a British armed force that defeated the military.

The 10-week battle claimed the lives of 649 Argentine soldiers, more than twice the death toll suffered by British forces, which lost 255.

A U.N. ruling said the Malvinas Islands, known to the British as the Falklands, are in fact in Argentine waters, but they continue to be a self-governed British overseas territory.