“Salutes of Palestinian Prisoners’ Day. Glory to the martyrs. Freedom for the prisoners of freedom,” stated the PFLP in support of the strikers. 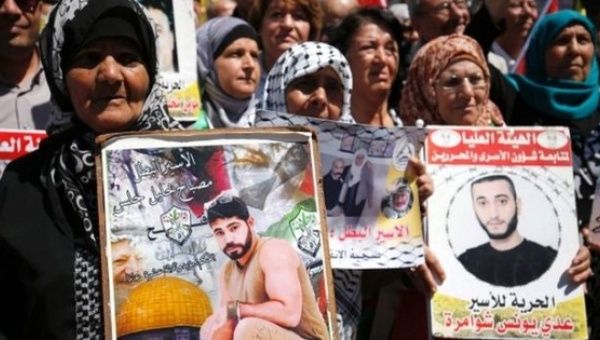 Protests in support of the prisoners have been held in Palestinian cities. | Photo: AFP

On Palestinian Prisoner’s Day Monday [17 Apr 2017], hundreds of Palestinians in Israeli prisons are staging a mass hunger strike, continuing the decades-long resistance of prisoners in the apartheid state.

RELATED: Palestine Retold: Palestine’s Tragic Anniversaries Are Not Only About Remembrance

Ma’an News Agency reported that prisoners throughout the country have purged all food products from their cells and have shaved their heads. According to Israel’s prison service, some 1,187 detainees from across the political spectrum are participating, with support from groups as diverse as the Palestine Liberation Organization  to the Marxist-Leninist Popular Front for the Liberation of Palestine, known as the PFLP.

In a statement in support of the strike, PLO Executive Committee Member Hanan Ashrawi affirmed on behalf of Palestinian leadership “unwavering commitment to ensuring the safe and unconditional release of all 6,500 Palestinian political prisoners.”

According to Ma’an, these prisoners include 57 women, 300 children, 13 members of parliament, 500 administrative detainees, 800 prisoners who require medical care and 18 journalists.

“Since the Israeli occupation of the West Bank (including East Jerusalem) and the Gaza Strip began nearly 50 years ago, more than 800,000 Palestinians have been kidnapped and imprisoned by Israel, and in the past two years alone, at least 13 discriminatory and racist laws have been enacted by the Israeli government that deliberately target Palestinian prisoners and are in direct violation of international law and conventions,” Ashrawi wrote in her impassioned statement.

“The entire global community should be alarmed by Israel’s willful breach and devaluation of the rights and lives of Palestinian political prisoners, especially in regards to the imprisonment and ill-treatment of Palestinian men, women, children, and the elderly,” she added.

The PFLP also released a statement in support of the strikers, saying, “…We salute every prisoner, the heroes and heroines of the battles of will and steadfastness … to the sick prisoners, administrative detainees and imprisoned leaders … and the long line of leaders who represent the national struggle and the prisoners’ cause.”

The group also congratulated the longest-serving woman prisoner, Lena Jarbouni, on her freedom after 15 years in Israeli jails.

Israeli authorities released Jarbouni Sunday, who stressed upon her release the right of Palestinian people to resist the Israeli occupation. She also expressed support for the prisoner’s strike.

Ahmad Herzallah, a former detainee and now with the Mohjat al-Quds Prisoners’ Association explained Jarbouni’s case to teleSUR. “Lina Jarbouni has been subjected to all forms of humiliation and repression practiced by the Zionist enemy against Palestinian detainees,” he said. “She is the only female prisoner who remained in Israeli custody after the Gilad Shalit’s exchange deal between Hamas and Israel in 2011, despite (the fact that) the agreement stipulated the release of all female prisoners under the deal.”

Jarbouni was detained on April 18, 2002 after Israeli army troops raided her home in the town of Arraba in Galilee over alleged charges of her affiliation with the Islamic Jihad movement and for housing Palestinian resistance fighters. Known for her advocacy for women’s rights inside Israeli jails, Jabrouni was elected to a leadership position of an organization of female Palestinian detainees in the Hasharon Prison.

The strike, which started Monday, is being led by Palestinian resistance leader Marwan Barghouti, who despite being imprisoned, has been touted as a possible future successor to Palestinian Authority President Mahmoud Abbas.

Despite the mass uprising, an Israel Prison Service official reportedly said they would not be responding to any of the prisoners’ demands, according to Ma’an.

RELATED: Palestinian Revolutionary Rasmea Odeh, Tortured in Israel, to Be Deported from US

Meanwhile, Israeli Minister of Public Security Gilad Erdan has ordered a separate military hospital to be set up so that hunger-striking Palestinian prisoners are not taken to civilian hospitals.These hospitals have so far refused to force-feed hunger-striking Palestinian prisoners, in line with accepted medical ethics that force-feeding is a form of torture.

The Israeli Supreme Court, however, recently ruled that force-feeding hunger-striking prisoners is constitutional.

While the strike began Monday, it is intended to be an open-ended one, with more prisoners expected to take part as the days go on. Protesters in support of the strikers are also staging mass rallies.