The Earth versus Capitalism

Unfortunately, as of Earth Day 2017, capitalism is winning the war it has been waging against the planet. 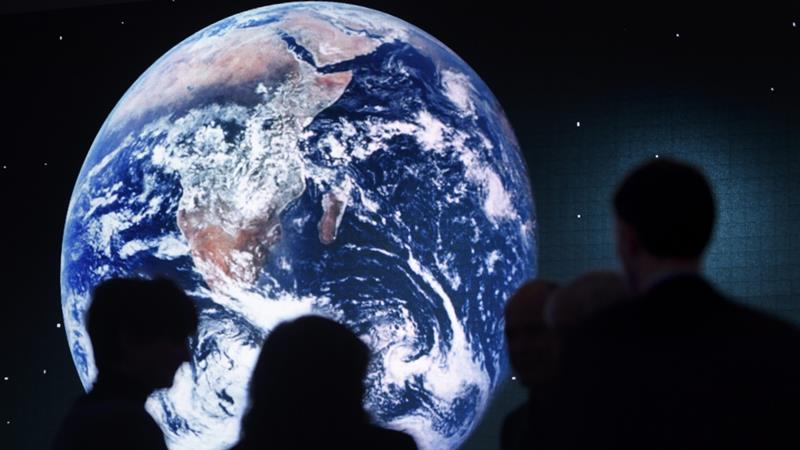 A picture of Earth is shown on a giant screen behind participants of a panel at the World Economic Forum, in Davos in January 2017. [Laurent Gillieron/EPA]

22 Apr 2017 – During one of numerous failed attempts to establish himself as an environmentalist, New York Times foreign affairs columnist Thomas Friedman enthusiastically reported in 2010 that – in honour of Earth Day on April 22 – the United States Navy had test-flown a fighter jet “powered by a 50-50 blend of conventional jet fuel and camelina aviation biofuel made from pressed mustard seeds”.

Armed with this and other bits of trivia, Friedman concluded that the US military was thus in fact on the front line of the battle for a clean Earth.

Never mind that, mustard seeds or not, the US Defense Department remains one of the top polluters on the planet.

To be sure, the neoliberal media’s toxic alignment with military and corporate agendas produces lucrative returns for those involved.

And as long as the arms industry and other pillars of the international capitalist order remain healthy, the long-term health of Earth and its inhabitants matters little.

As Earth Day comes around once again this April 22, the powers that be appear rather committed to staying on the self-destructive course.

Lest anyone get too depressed, however, there are plenty of cheery non-antidotes to environmental calamity to distract from impending auto-annihilation.

Conscience-easing mechanisms abound beyond those cute little mustard seeds that endearingly endow the business of imperial devastation with a veneer of eco-friendliness.

These range from pledges of corporate sustainability, to green branding strategies and marketing techniques to carbon footprint reduction ploys – by which, for example, purchasers of airline tickets and other high-polluting services can pay extra to magically forgive the environmental impact of their earthly activities.

In a recent email to me, US evolutionary biologist Rob Wallace, author of Big Farms Make Big Flu, addressed the farcical nature of capitalist “remedies” to the crisis.

OPINION: The case for collaborating on climate change

“Business plans aimed at profiting off increasing environmental efficiencies would be laughable if they weren’t so damn dangerous”, writes Wallace. For one thing, “better – and cheaper – extraction, increasing efficiency per unit currency invested, selects for greater exploitation, often until a resource is exhausted”.

“Environmental destruction,” Wallace explains, “has been stitched into the fabric of capitalism’s metaphysics from its very beginning,” while the global evolution of capitalism has essentially been a process of “stripping the biosphere bare”.

Now, as the destruction of environments proceeds apace, “what’s still left becomes more valuable [and] the resulting competition turns only fiercer, pursued under the guise of ‘saving the environment”.

Max Ajl, a researcher in rural development at Cornell University, concurs that “the history of capitalism has been a history of environmental spoliation, and many of the actual productive industries of capitalism rely on damaging the environment – for example the trillions [of dollars] tied up in the expectation of burning the world’s physical stock of hydrocarbons”.

In an email to me, Ajl outlined two basic tendencies of capitalism, the first being “to expand, or make larger the material base of production from which it draws a surplus”.

The second, meanwhile, is “to discount the future, precisely because by robbing from the future one can expand the material base of production in the present”.

Given that capitalism’s underlying logic renders it inherently unsustainable in the long term, it would seem that the system itself is utterly illogical, at least from the point of view of, you know, the survival of humankind.

Luckily for those who would dispense with logic altogether, a godsend has arrived in the form of US President Donald Trump, whose claims to fame include having argued that climate change is a Chinese-orchestrated hoax.

The new head of state has wasted little time cultivating an environment in which reality is whatever Trump himself deems it to be at any given moment.

Regarding the potential fallout of the Trump presidency on the physical environment, Time Magazine noted on April 12 that, “[s]ince taking office, Trump has moved to gut [Barack] Obama’s signature climate change regulations, signed executive orders to aid the fossil fuel industry and installed a critic of the Environmental Protection Agency (EPA) as its head”.

Of course, not everyone is resigned to a world war on nature.

Granted, resistance to disruptive patterns can also be met with even more blatantly existential threats. In Honduras and other territories, environmental activism is often a death sentence.

For his part, Wallace reasons that “a market that rewards efforts to destroy Earth’s remaining resources can be better resolved in favour of a civilisation that conserves the environments it consumes”.

The upshot, he says, is that “we’re down to ecosocialism or barbarism. There is no other way out of the [current] fix”.

Unfortunately, as of Earth Day 2017, barbarism is winning.

One Response to “The Earth versus Capitalism”