A people cannot be permanently repressed in all these ways without viewing the structure that has emerged as an apartheid regime. 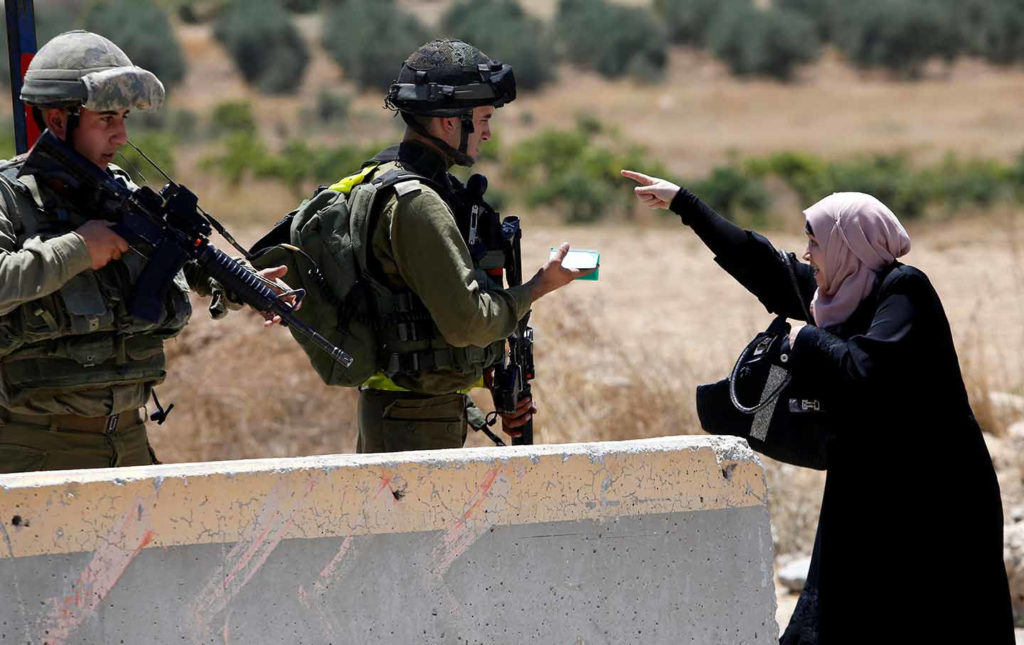 A Palestinian woman argues with Israeli soldiers at a West Bank checkpoint south of Hebron on August 16, 2016. (Reuters / Mussa Qawasma)

22 Mar 2017 – Six months ago, the UN’s Economic and Social Commission for West Asia (ESCWA) asked Virginia Tilley and me to write a study examining the applicability of the international criminal law concept of apartheid to Israel’s policies and practices toward the Palestinian people. We were glad to accept the assignment, and conceived of our role as engaging in an academic undertaking. ESCWA, one of several UN regional commissions, requested the study as a result of an uncontested motion adopted by its 18 Arab member governments.

Almost within hours of its release on March 15, our report was greeted by what can only be described as hysteria. The US ambassador to the UN, Nikki Haley, denounced it and demanded that the UN repudiate it. The newly elected secretary general, António Guterres, quickly and publicly called for ESCWA to withdraw the report from its website, and when Rima Khalaf, the head of the commission, resisted, Guterres insisted. Rather than comply, Khalaf resigned. Soon thereafter, the report was withdrawn from the commission’s website, despite its having been published with a disclaimer noting that it represents the views of its authors and not necessarily that of ESCWA or the UN.

What is striking about this response, which resembles in many respects the US government response to the Goldstone Report (the UN Fact-Finding Mission on the Gaza Conflict of 2008-9), is the degree to which Israel’s supporters, in response to criticism, have sought to discredit the messenger rather than address the message.

We had hoped that our analysis would prompt debate, dialogue, and consideration of our recommendations.

Tilley, a professor of political science at Southern Illinois University Carbondale, and I, as well as ESCWA, would welcome substantive discussion of and critical feedback on our report, and we had hoped that our analysis and conclusions would provide the basis for dialogue and further consideration of the recommendations appended at the end. ESCWA, for its part, took steps to ensure that the report lived up to scholarly standards, submitting the draft text to three prominent international jurists, who anonymously submitted strong positive appraisals along with some suggestions for revision, which we gratefully incorporated before the final text was released. For government officials and others to dismiss our report as a biased polemic is irresponsible, with respect both to the authority of the UN and to international law.

During my tenure as the UN’s Special Rapporteur on human rights in the occupied Palestinian territories (2008-14), I saw how defenders of Israel attempt to discredit critics. My reports in that post often contained sharp criticisms of Israel and other actors, ranging from defiance of international law, unlawful expansion of settlements, excessive use of force, and complicity of international corporations and banks that do business for profit with the settlements. To my surprise, I never received substantive pushback regarding my allegations, but I did have the unpleasant experience of having my words on unrelated issues torn out of context. Among my harshest critics were not only the usual ultra-Zionist NGOs, but also Barack Obama’s diplomats at the UN, including Susan Rice and Samantha Power, as well as then-Secretary General Ban Ki-moon. I mention this personal experience only to note that it falls into a longstanding pattern of rebuttal that prefers to smear rather than engage in reasoned debate about important issues of law and justice.

The international crime of apartheid was set forth in the 1973 Convention on the Suppression and Punishment of the Crime of Apartheid. The main elements of the crime consist in deliberate and systematic acts of racial discrimination with the purpose of maintaining unlawful structures of domination by one race over another. Our report also considered whether, in the context of inquiring into the presence of apartheid, it was appropriate to consider Jews and Palestinians as distinct races; we found that there was abundant grounding to do so. As our report shows, “race” in this context is treated as a socially and politically constructed category defining a distinct people. It has no necessary correlation with biogenetic realities, which in this case show an overlap between Jews and Palestinians.

Even Palestinian citizens of Israel, who can vote and form political parties, are subject to many discriminatory laws.

The report also proceeds from the proposition that whether apartheid exists or not depends on the overall treatment of the Palestinian people as a whole. Adopting what we believed to be innovative methodology, we approached this challenge by dividing the Palestinians into four domains that correspond to the manner in which Israel has exercised its authority over the course of many decades, although specific tactics of control have varied through time. In the past, a thorough study by international law scholars found that Israel’s practices in the occupied Palestinian territories are consistent with apartheid. It called attention to the discriminatory treatment of Palestinians, who are subject to military administration as compared to the Jewish settler population, which enjoys the full benefit of the rule of law as it is observed in Israel in relation to Jewish nationals. That study found that such features as “settler-only roads,” dual legal systems, and the draconian separation of the two populations into regions on the basis of race are the hallmark of apartheid. Repressive practices that have made the lives of ordinary Palestinians a daily ordeal are part of this system, as international law establishes that penalizing resistance to apartheid is itself a crime of apartheid.

A second domain investigated in the report involves Palestinians who are residents of Jerusalem. Here the apartheid character of Israeli rule is exhibited in the way the government undermines the security of those Palestinians, manipulating their rights of residence as well as imposing a variety of discriminatory practices, ranging from fiscal measures to the issuance of building permits. The third domain concerns the Palestinian minority living in Israel, perhaps the most problematic component in terms of establishing a definition of apartheid that encompasses the entire Palestinian population. In this category are some 1.7 million citizens of Israel, who are allowed to form political parties and vote in elections. But this minority, which makes up about 20 percent of the overall Israeli population, is prohibited by law from challenging the proclaimed Jewish character of the state and is subject to a wide range of discriminatory nationality laws as well as administrative practices that severely restrict their rights, with effects on land acquisition, property, immigration, family reunification, and marital freedom.

A fourth domain, and the one affecting the largest demographic segment, is made up of Palestinians registered as refugees by UN procedures or living under conditions of involuntary exile. In the background is the non-implementation of UN General Assembly Resolution 194 (1948), which confirms the right of return enjoyed by Palestinians dispossessed or displaced by Israel in 1948. This right of return is declared in General Assembly Resolution 3236 to be an “inalienable right,” which thus presumably incorporates those additional several hundred thousand Palestinians displaced by the 1967 war. As far as is known, no Palestinian displaced since the establishment of Israel in 1948 has been granted the right of return to resume residence.

From the perspective of international law, the crime of apartheid has been detached from its historical origins in South Africa. Neither the 1973 Convention nor the 1998 Rome Statute underlying the International Criminal Court ties apartheid to South Africa, but rather treats its practice as a stand-alone crime against humanity. Thus, there are important differences between the way apartheid operated in South Africa and the way it is currently being imposed on the Palestinians, but these differences are not relevant to the question of whether it fairly and accurately applies to Israel. One notable difference is that in South Africa the Afrikaner leadership forthrightly proclaimed apartheid as a reflection of its ideological belief in the separation of races, whereas for Israel such a structure of separation on the basis of race is denied and repudiated. There are other differences as well, relating to degrees of labor dependence and the demographic ratio.

This quasi-permanent structure of domination cannot be justified convincingly by reference to Israeli security needs.

Our report concludes that Israel has deliberately fragmented the Palestinian people in relation to these four demographic domains, relying on systematic discrimination, including “inhuman acts,” to maintain its control, while continuing to expand territorially at the expense of the Palestinian people. On the basis of these findings—backed up by detailed presentations of empirical data, including reliance on Israeli official sources—we conclude that the allegation of apartheid as applied to the Palestinian people is well founded.

We realize that our report is the work of academic investigators and is not an authoritative finding by a formal judicial or governmental institution. At this point it has not—contrary to media reports and diplomatic denunciations—even been endorsed or accepted by the UN, or even ESCWA. We do recommend such an endorsement, and we urge the UN, national governments, and civil society to take measures designed to encourage Israel to dismantle its apartheid regime and treat the Palestinian people in accord with the dictates of international law and human rights, as well as elementary morality.

The broader setting associated with our contention that Israel has become an apartheid state draws on the reality that there is no peaceful resolution to the conflict on the diplomatic horizon, and thus no foreseeable prospect for ending the discriminatory regime. This quasi-permanent structure of domination cannot be justified convincingly by reference to Israeli security needs. A people cannot be permanently repressed in these various ways without viewing the structure that has emerged as an apartheid regime. Indeed, part of the reason for not awaiting a more formal assessment of these charges is our sense of urgency in ending a set of arrangements that have for so long been responsible for so much suffering and denial of basic rights, above all the right of self-determination.

It remains our central hope, one shared by ESCWA, that the widespread availability of the report will lead to a clearer understanding of the Palestinian plight and encourage more effective responses by the UN, by governments, and by civil society. Beyond this, it is our continuing wish that people of good will throughout the world, especially within Israel, will work toward a political solution that will finally allow Jews and Palestinians to live together in peace, with justice.