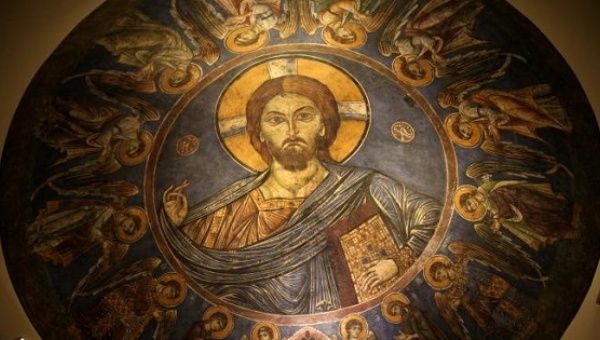 A painted part of an Orthodox Church dome depicting Christ, which was recovered by Cyprus after being stolen in the aftermath of Turkey’s invasion in 1974, is seen in a Cypriot museum in Nicosia, Cyprus May 19, 2017.
| Photo: Reuters

An international convention targeting the illicit trade in cultural artifacts took effect on Friday [19 May 2017]; a move to curb what is regarded as a major source of funding to militant groups in conflict zones.

Armenia, Cyprus, Greece, Portugal and San Marino as well as Mexico became the first countries on Friday to sign the convention drafted by the Strasbourg-based Council of Europe during a meeting in Nicosia.

The convention is designed to “codify” and standardize criminal law against the excavation, importation and exportation, acquisition and placing of artifacts on the market.

“This is the first convention for the protection of cultural heritage in the world which deals with criminal offences against cultural property – from destruction to the theft and aiding and abetting by selling artifacts, thus financing terrorism and encouraging this to take place,” Cypriot Foreign Minister Ioannis Kasoulides told Reuters Television.

By bringing national legislations up to the same standards, the treaty aims to close existing loopholes and enable much more effective cross-border cooperation in investigating, prosecuting and sentencing persons suspected of the offences listed in the convention, according to the Council of Europe.

“It will harmonize legislation of member states thus making it easier for police forces to cooperate,” said Thorbjorn Jagland, secretary-general of the council.

The council says the issue has taken on extra urgency because of wars in Syria and Iraq, the cradle of some of the world’s most treasured cultures. Some estimates, Kasoulides said, suggested groups like Islamic State had earned about $150 million from selling off antiquities.

Cyprus, ethnically split in a Turkish invasion after a brief Greek-inspired coup in 1974, has often resorted to legal action to recoup stolen artifacts smuggled out after the conflict by art dealers.

In one case, Cypriot officials spent weeks in U.S. courts trying to reclaim priceless icons and mosaics dating from the 6th century that had been hacked off walls by smugglers and made their way through Europe to the United States. Some of those recovered now hang on walls at a museum in the capital Nicosia.