Resistance Is a Way of Life for Kashmiri Youth

Why Kashmir’s millennials have stones in their hands. 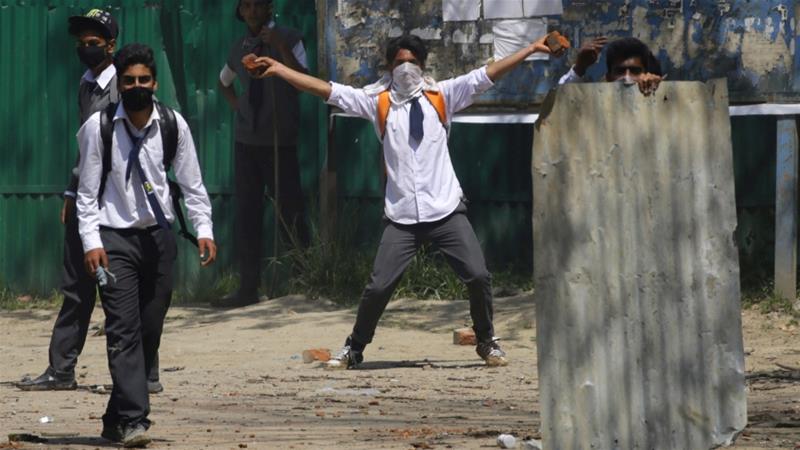 Kashmiri students protesting against Indian police during clashes at a school in Srinagar, the summer capital of Indian Kashmir, on April 17. [Farooq Khan/EPA]

26 Apr 2017 – The year 2017 is not even halfway through, but in the Indian-controlled Kashmir it has already been named “the year of the student uprising”.

Earlier this month, students from several educational institutions across Kashmir started to demonstrate against the Indian forces. It is an unprecedented and historic turn of events, because never before have the Kashmiri students participated in such demonstrations in a collective manner.

But here they are: quintessential students in their uniforms, with bags slung over their backs. They are unimaginably furious, impassioned, and mostly peaceful, but sometimes they also sling stones at the Indian forces.

Protesting students have already become an iconic sight in Kashmir, signalling that the region’s millennials had inherited the burdens of a long struggle. Raised amid extremely brutal militarisation, these Kashmiri youngsters face the Indian troops as fearlessly as if taking notes in a history class.

For them, resistance has become a way of life.

Student protests in Kashmir started after the Indian army deployed disproportionate force against college students in Pulwama, a district 40km from the state capital Srinagar. The altercation between the students and the paramilitary resulted in more than 60 students being injured, some of them critically.

So students all over the region decided to resist.

These protests came on the heels of the mass uprising that has been ongoing since the killing of Burhan Wani in July last year.

Wani was a commander with the Hizbul Mujahidin. He had joined the militancy at the age of 15 after being harassed by Indian forces, and he became the face of indigenous Kashmiri struggle against India in no time.

His killing motivated Kashmiri people of all ages and genders to take to the streets and the government responded with lethal force. The valley was put under a three-month curfew, media was censored and mobile phone and Internet services were curtailed.

By November 2016, close to 100 Kashmiris had been killed and more than 15,000 injured at the hands of Indian forces. The victims of what came to be known as the world’s first “mass blindings” were also among the injured.

Indian troops’ use of pellet guns left more than 6,000 people injured in one or both eyes since the protests began following Wani’s death. A 14-year-old schoolgirl Inshah Malik, who was not part of the protests, lost both of her eyes as a result of close range pellet gunfire.

The mantle of resistance has been picked up by the third generation of Kashmiris, who seem to have no fear of persecution, and a thirst for Kashmir’s freedom from India.

Inshah’s wounded face became the symbol of the disproportionate violence that the Indian government was using against the Kashmiris. To assess the reports of these human rights abuses. the UNHRC wanted to send representatives to Kashmir, but the government of India refused.

At the start of the July protests the Chief Minister of Kashmir Mehbooba Mufti issued a statement saying: “Children should not be indulging in agitation. They should be going to schools and colleges. It is not for children to solve big issues …”

The government was trying hard to portray the uprising not as a genuine political expression but as the handiwork of a few “miscreant” youth.

The Indian Prime Minister Narendra Modi who stayed silent about the carnage for a long time, at some point mentioned that the Kashmiri youth should have laptops in their hands instead of stones.

In the Indian narrative, the Kashmiri demand for self-determination is severely undermined and misrepresented, and one of the ways in which this is done is by characterising the protesters as unemployed loiterers, drug addicts, disgruntled miscreants and, more often than not, as agitators paid by Pakistan.

READ MORE: Why are young people protesting in Kashmir?

“Agitational terrorists” a technical term coined specifically for the Kashmiri protesters is also deployed to subsume the Kashmiri resistance movement within the spectre of global terrorism. And this is despite the fact that the Tehreek, as the resistance movement is called in Kashmiri, is largely committed to plebiscite. Kashmiris simply want Independence from India.

The clear chant that continues to ring in the valley is Tchyeen ke lain gey Azadi – We will snatch our freedom (from India).

India’s brazen neglect of the demand for a plebiscite and its rampant state terrorism have forced another generation of Kashmiri youth to take up arms. The civilian resistance movement in Kashmir is also proliferating.

The Kashmiri people are no longer afraid of being killed, injured or imprisoned by Indian forces. Many civilians do not hesitate to run towards encounters taking place between militants and the army.

Kashmiri men, women, and children try to distract Indian forces during altercations to help militants escape. Such demonstrations depict the readiness with which Kashmiris are courting danger to show solidarity with the militants and amplify their political demand.

In February this year, the Indian Army General Bipin Rawat issued a warning to the Kashmiris stating that anyone hindering the operations of Indian troops would be treated as “over-ground workers of the militants”. Even though the Indian forces are notorious for neglecting standard operation procedures in Kashmir, after the statement was issued incidents of “stray bullets” killing civilians rose even further.

OPINION: Kashmir and the myth of indivisible India

Those killed by “stray fire” in similar incidents even included a little girl who was sleeping at home and a woman tending to her vegetable patch away from the encounter site.

All this came to head again on April 9, the day of elections for the Indian parliament, which were boycotted en masse by the Kashmiris. Voter participation in Kashmir capped at a dismal 2 percent and the voting process was interspersed with 200 clashes. Attacks by Indian troops on election day claimed eight lives.

Soon after the killings, video showing the Indian forces holding Kashmiri boys in varying degrees of duress began circulating. One video showed a Kashmiri man hog-tied as a human shield to the front of an army Jeep. He was paraded across neighbourhoods with the army announcing similar treatment for those who dared to demonstrate.

The videos unleashed a fresh wave of fury. For Kashmiris these images reinforced the conviction that the Indian government lacked any will for constructive political strategy and that it would continue to use brute force to repress legitimate Kashmiri demands.

Many Kashmiris took to social media, which in recent years has become a potent tool for sharing information. Users have at times even broadcasted killings by Indian troops in real time.

Although the internet has been shut down 29 times since July and mobile services snapped for long periods, the government attributes the large-scale uprising, including the student protests, to networking made possible by social media and Whatsapp groups.

As of writing this, the clashes between Indian troops and students are ongoing, with a few youth critically injured. The internet has again been curtailed, and about 300 Whatsapp groups accused of engineering the protests have been suspended and many students arrested.

The Indian Home Minister Rajnath Singh has asserted that “there will be a change in Kashmir in a year’s time”, but he has not specified how the change will occur. With no political map in sight and no let up in the violence against protesters and combatants alike, Kashmiris have interpreted Singh’s  statement as a clear threat to their life and limb.

Meanwhile, the mantle of resistance has been picked up by the third generation of Kashmiris, who seem to have no fear of persecution, and a thirst for freedom from India.

Ather Zia is a poet and a political anthropologist who teaches Anthropology and Gender Studies at University of Northern Colorado Greeley. She is the founder editor of Kashmir Lit.