To Prevent or Stop Wars: What Can Peace Movements Do?

To Prevent or Stop Wars: What Can Peace Movements Do? By Christine Schweitzer and Jørgen Johansen, Irene Publishing, September 2016, 142 pp. 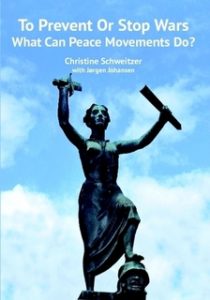 1 May 2017 – Christine Schweitzer, the current chair of the War Resisters’ International and very involved with the Balkans Peace Team during the 1980s Yugoslav wars, has written a useful analysis of peace organizations opposition to government military policy, basically using secondary sources.  There is a good bibliography on nonviolent protests with numerous references to works in German which may be less known to FOR readers.

She focuses on opposition within the USA to the war in Vietnam and the two wars in Iraq (1991) and (2003).  There is also a chapter on the peace movement opposition to US government aid to the Contras of Nicaragua.  She does not deal with the movements that sought a ban of certain types of weapons, cluster munitions, land mines, drones nor efforts to control nuclear weapons (the Freeze) nor “Ban the Bomb” whose renewed effort is underway at the UN General Assembly these days.  The book does not go into a description of socio-economic conditions which may be a cause – or at least an important factor – in armed conflicts. Thus one has to know already something of economic conditions, the class structure, and the role of indigenous populations to understand the Sandinista-Contra struggle in Nicaragua and other armed conflicts in Central America at the same time.

As the focus of the book is on the USA, the term “Peace Movement” is basically on the peace groups founded due to the First World War: The Fellowship of Reconciliation, The War Resisters’ League, The Women’s International League for Peace and Freedom, The American Friends Service Committee, and the Friends Committee on National Legislation.  These organizations represent the “hard core” but have avenues of communication with shorter-lived groups that were mobilized around certain issues – Students for a Democratic Society during the Vietnam War, or SANE on nuclear weapons.

The book does not deal with mediation efforts of the Peace Movement organizations, only their opposition to government policy.  There is, however, an interesting chapter on a mediation effort which was not known to me: “Women in White in Liberia.”  This was not so much a protest movement against the Liberian government as an appeal directed both to the government and to rebel groups to end the war.  In 20002, the Charles Taylor-led government of Liberia did not control much of the territory.  Taylor, a former rebel and war lord had been able to take the capital, Monrovia.  Since there was little wealth to be gotten from the countryside, Taylor left much of the forest area in the hands of armed opposition groups.  Taylor allowed the “Women in White” to demonstrate in Monrovia, but demonstration could not be held in the forest areas.  Messages, however, on their aims were sent to the rebel groups.  Women in White sent a delegation to Accra, Ghana, where negotiations among the government and Liberian armed factions were being held to encourage the negotiations and the President of Nigeria who was serving as chief mediator.  Women in White did not continue as an organized group in the post-Charles Taylor era.  They are a good example of the sort of ad hoc coming together to meet specific situations of conflict but which do not necessarily continue once the situation changes.

We, who are part of structured (more or less) organizations for the resolution of armed conflicts, need to seek ways to meet on-going challenges, to build cooperation among groups and to reach out to the “unorganized”. The book, the first of a new peace publishing house headed by Jørgen Johansen, also of The War Resisters’ leadership, merits close reading and especially discussion of strategies.

Jørgen Johansen is a nonviolence author/activist, editor of Irene Publishing, and a member of the TRANSCEND Network from Norway.

This article originally appeared on Transcend Media Service (TMS) on 1 May 2017.

Anticopyright: Editorials and articles originated on TMS may be freely reprinted, disseminated, translated and used as background material, provided an acknowledgement and link to the source, TMS: To Prevent or Stop Wars: What Can Peace Movements Do?, is included. Thank you.