Bilderberg 2017: Should We Be Worried Yet? 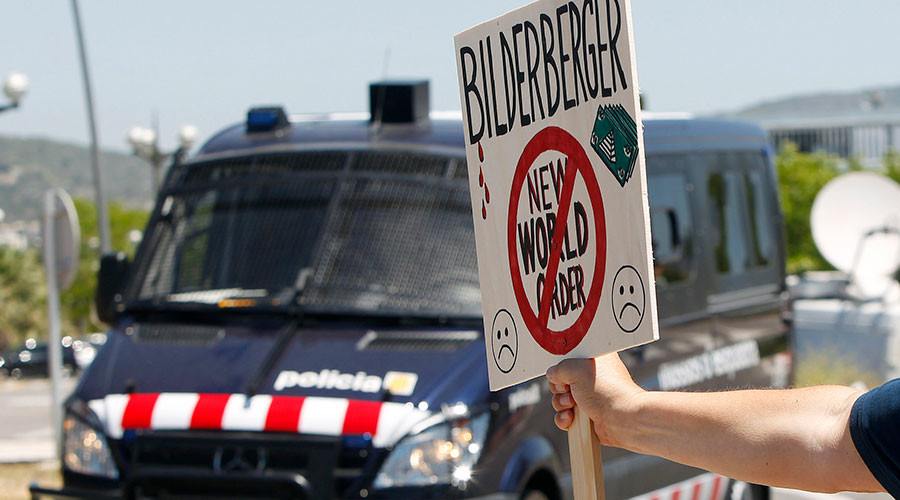 The 2017 Bilderberg Meeting takes place 1-4 June in Chantilly VA, USA. A press release including the list of topics and participants can be found here.

5 Jun 2017 – Just like they’ve been doing every year since 1954, influential Bilderberg members – including journalists – assembled behind closed doors to hold off-the-record talks on a number of pressing global issues.

The best criticism I’ve seen yet against the Bilderberg Group was found on a banner that draped a barbed-wire fence surrounding a golf course at one of these high-powered pow-wows: “Bilderberg Ate My Hamster” the message declared. That’s basically the long and the short of it, because thanks to the group’s arcane cloak of secrecy, everything and anything can now be blamed on them.

First, for the uninitiated, a brief primer on Bilderberg. In 1954, the world’s movers and shakers, then top-heavy with balding American and European white males, arranged to meet in private at Oosterbeek, Netherlands. Inside of the discrete Bilderberg Hotel, these global overachievers, according to investigative journalist Daniel Estulin in his book, The True Story of the Bilderberg Group, first began to debate “the future of the world.”

“Imagine a private club where presidents, prime ministers, international bankers and generals rub shoulders, where gracious royal chaperones ensure everyone gets along, and where the people running the wars, markets, and Europe (and America) say what they never dare say in public,” Estulin wrote.

Bilderberg is a bit like Fight Club for the rich and powerful where the first and second rules are, ‘You do not talk about Bilderberg!’ Although the meetings conform to the Chatham House Rules, which says “participants are free to use the information received, but neither the identity nor the affiliation of the speaker(s), nor that of any other participant, may be revealed,” some members have tossed tantalizing morsels of inside information for public consumption.

Lord Denis Healey, for example, one of the group’s founders, did little to detract from the mystery surrounding Bilderberg when he triggered conspiracy theorists worldwide by mentioning “one-world government” in an interview with journalist Jon Ronson: “To say we were striving for a one-world government is exaggerated, but not wholly unfair. Those of us in Bilderberg felt we couldn’t go on forever fighting one another for nothing and killing people and rendering millions homeless. So we felt that a single community throughout the world would be a good thing.”

Healey, probably chuckling to himself, continued: “Bilderberg is a way of bringing together politicians, industrialists, financiers and journalists. Politics should involve people who aren’t politicians. We make a point of getting along younger politicians who are obviously rising, to bring them together with financiers and industrialists who offer them wise words. It increases the chance of having a sensible global policy.”

With that comment in mind, it must be said that Bilderberg has a rather amazing track record among attendees who have gone on to enjoy high office: Bill Clinton attended his first Bilderberg meeting in 1991, and one year later he was sitting pretty in the White House; Tony Blair attended as a relative unknown in 1993 and in 1997 he was British prime minister; investment banker Emmanuel Macron was an attendee in 2014, and just this year he emerged from the political shadows at the 11th hour to beat out veteran nationalist politician, Marine Le Pen, in the French presidential race. And that is just the short list.

Healey also relayed the story about the rise of ‘Iron Lady’ Margaret Thatcher, who attended the Bilderberg meeting in 1975. After sitting silent for several days, Thatcher finally endeavored to deliver a speech – I’m guessing on the uselessness of social welfare and labor rights – which apparently caused some guests to drop their silverware.

“The room was stunned. Here’s something for your conspiracy theorists. As a result of that speech, David Rockefeller and Henry Kissinger and the other Americans fell in love with her. They brought her over to America, took her around in limousines, and introduced her to everyone,” Healey said.

The fact that some presidents and prime ministers happened to be past attendees of Bilderberg is not terribly surprising. After all, it is clear this group only extends invitations to those who demonstrate above-average abilities and brains, as well as hold the ‘correct’ political beliefs. This would mean a dedication to globalization and Neo-Liberal economic policies, I’m guessing, which thus far have proven a detriment to the majority of us who were not born into this world as a corporation or CEO.

Therefore, while not very encouraging, it is hardly surprising that wizened geopolitical guru, Henry Kissinger, for example, a long-time Bilderberg regular, appears on the guest list alongside rising political stars, like ultra-hawkish US Senators Tom Cotton and Lindsey Graham (President Cotton, anyone?). And Donald Trump’s National Security Adviser, H.R. McMaster, whose appointment has been described as a “worrying signal to Russia.” Meanwhile, David H. Petraeus, the retired US Army officer and former CIA Director who, despite a sensational setback in his career, is attending his fifth-straight Bilderberg event this year.

And here’s a little Bilderberg fun fact. Any guesses as to what will be one of the topics of discussion – for the second year running? Yes, Russia. To be more precise, the exact title of the theme is ‘Russia in the international order,’ which could be open to any sort of interpretation, sinister or otherwise. And how many guests from Russia will be in Chantilly, Virginia, the site of this year’s meeting, to represent the Russian side? Exactly zero. But given the bad press Russia gets in Western media circles these days perhaps that’s not terribly surprising.

Which leads me to my next question: Why are there so many media figures present at this secretive event? The numbers are somewhat shocking, and more so when we consider that many of them are longstanding regulars.

If media personalities in attendance at these invitation-only events are forbidden from reporting on them, then their attendance, aside from an opportunity for consuming a lot of great food and drink, I would imagine, seems a little redundant. Yes, these individuals could contribute intelligent commentary to the discussions, but so could thousands of more intelligent doctors and lawyers who weren’t invited and never will be. This brings us back to the original problem, which is that average people are not privy to what conclusions – if any – are made at these ultra-elitist talk shops. In any case, the idea of a journalist not reporting on an event that includes the world’s most influential people is a bit like a trader walking the floor of the stock exchange with no intention of making a buck. It makes little sense.

Then there is the question of ‘fake news,’ which sounds a bit rich coming from this group.

Charlie Skelton, a well-known Bilderberg critic, described in the Guardian his favorite joke from this year’s topic menu: ‘The war on information.’

“Bilderberg is concerned about fake news? The world’s most secretive conference, which is spending hundreds of thousands of dollars keeping the press away from its sacred discussions, which has spent decades lying and obfuscating about itself, wants to ensure the spread of truth,” Skelton wrote.

The Bilderberg Group’s minimalistic website, however, explains away any contradictions by saying these events provide attendees with an opportunity to discuss global events without being bound by “the conventions of their office.”

“Thanks to the private nature of the meeting, the participants are not bound by the conventions of their office or by pre-agreed positions. As such, they can take time to listen, reflect and gather insights. There is no detailed agenda, no resolutions are proposed, no votes are taken, and no policy statements are issued.”

While I have no reason to doubt that the most powerful people on the planet mingle once a year for totally innocuous purposes, it’s the secrecy part that is difficult to understand.

As even Google Search seems to understand, there is no place for secrecy today in our modern, highly integrated societies, and least of all among the upper echelons, lest we are willing to accept the tremendous burden this paradox places on the collective psyche, which will, naturally and in due course, arrive at the conclusion that such non-transparent traditions – beyond the realm of public scrutiny – are totally inconsistent to the letter and spirit of democratic principles.

Robert Bridge, an American writer and journalist based in Moscow, Russia, is the author of the book on corporate power, Midnight in the American Empire, released in 2013. @Robert_Bridge

One Response to “Bilderberg 2017: Should We Be Worried Yet?”