Agribusiness companies are taking advantage of Tanzania’s desperate need for aid to push a development plan that will allow them to dominate the country’s agriculture sector and plunge farmers into debt. A similar plan led to a suicide epidemic among Indian farmers in recent years. 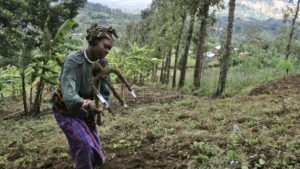 A woman works a field near the Tanzanian town of Arusha. (AP/Karel Prinsloo)

13 Jun 2017 – A “development assistance” initiative launched five years ago by the G8, an inter-governmental political forum of the world’s most industrialized nations that consider themselves democracies, is holding Tanzania hostage to the benefit of agribusiness and the detriment of small-scale Tanzanian farmers.

The New Alliance for Food Security and Nutrition (NAFSN), founded by the G8 in 2012 to ostensibly end hunger and poverty for 50 million people, has forced the Tanzanian government to amend its laws to drastically favor agribusiness and seed companies if it wishes to continue receiving developmental assistance aid. Monsanto, one of the NAFSN’s partners in Tanzania, is set to benefit from these changes to Tanzania’s laws.

The NAFSN is funded by the EU, the U.S., the UK, the World Bank and the Bill & Melinda Gates Foundation. The alliance had secured approximately $3.7 billion in private sector investment in signatory countries in Africa as of June 2012, a figure which is said to have since expanded, though no new figures have been released.

While the NAFSN was supposed to benefit small-scale farmers, local farming organizations were shut out of negotiations, while agribusiness lobbyists had unprecedented access to those drafting the requirements of signatory countries seeking developmental assistance. Tanzania’s government, which administers one of the world’s least developed countries, was desperate for the aid. Due to this economic pressure, the Tanzanian legislature obliged.

Per the new legislation, foreign commercial investors would be given faster and easier access to agricultural land in the African nation, as well as strong protections for “intellectual property rights,” e.g., seed patenting. Patented seeds, largely the products of behemoth seed companies like Monsanto and Syngenta, often pop up in neighboring farms that use traditional seeds via cross-pollination, a phenomenon that has been used by Monsanto and similar companies to sue small-scale farmers for “stealing” their intellectual property.

In addition, seeds that are not patented – i.e., all seeds traditionally used by Tanzanian farmers – are now forbidden from being sold or even given to friends or family, threatening the centuries-old tradition of seed exchanges that have kept costs down for farmers. Michael Farrelly of the Tanzania Organic Agriculture Movement (TOAM)  told Mondiaal Nieuws that “Eighty percent of the seeds are being shared and sold in an informal system between neighbors, friends and family. The new law criminalizes the practice in Tanzania.” 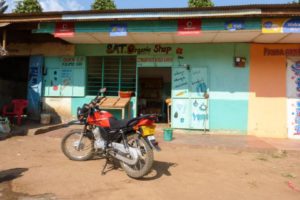 An organic seed shop in Morogoro,Tanzania. Shops like this one will soon be outlawed under the terms of a poverty-reduction initiative which critics say helps big agribusiness, and hurts farmers. (Photo: Ebe Daems )

If Tanzanian farmers break the new law barring seed exchange, they face a minimum prison sentence of 12 years, a $230,000 fine, or both. Considering that the average wage in Tanzania is less than $2 a day, the punishment seems rather draconian, considering the nature of the “crime.”

However, the new laws themselves are likely illegal under international law, as Article 9 of the International Treaty on Plant Genetic Resources for Food and Agriculture (ITPGRFA), also known as the “Seed Treaty,” states that no law should “limit any rights that farmers have to save, use, exchange and sell farm-saved seed/propagating material.” But affected Tanzanian farmers will likely be unable to make a viable court case against the new legislation due to their limited economic resources.

Farrelly argued that these recent actions show that the NAFSN’s lofty promises to help end poverty come with a catch. “In practice, it means that the fifty million people that the New Alliance wants to help can escape from poverty and hunger only if they buy seeds every year from the companies that are standing behind the G8.”

The Bill & Melinda Gates Foundation, one of the NAFSN’s funding partners, is particularly well-known for pushing the interests of big agribusiness on small-scale farmers in developing countries, as evidenced by one of the Gates Foundation’s “most successful” initiatives – the introduction of genetically modified (GM) cotton to India. Despite the promise that GM cotton would increase yields, this turned out not to be the case and Indian farmers who adopted the GM crops became trapped by debt, as their disappointing yields left them unable to pay for the expensive seeds and chemicals needed to cultivate GM plants.

This debt slavery soon led to one of the largest suicide epidemics in global history, with 300,000 Indian farmers having committed suicide over the last 20 years. Despite this travesty, Monsanto and other companies, such as Cargill and Dow Chemical, have benefited handsomely from India’s “green revolution,” seeing the value of their stocks skyrocket. The Gates Foundation itself has financially benefited as well due to its multi-million dollar investments in all three companies.

If the new laws being forced on Tanzania are any indication, the African nation may soon follow in India’s footsteps.