The Genocide of Brazil’s Indians 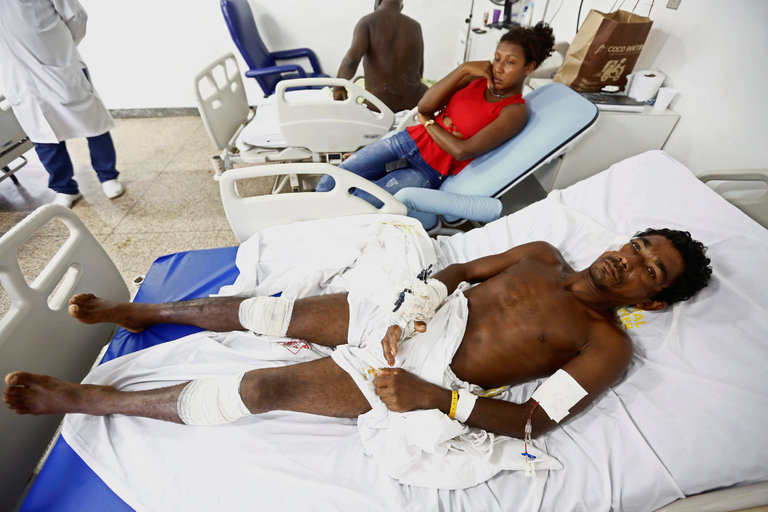 Jose Ribamar from Brazil’s indigenous Gamela tribe is pictured next to his daughter at a hospital after he was injured in a dispute over land in northern Brazil, in São Luis, Maranhao state, Brazil. Credit Lunae Parracho/Reuters

29 May 2017 — On April 30, a group of ranchers armed with rifles and machetes attacked a settlement of about 400 families from the Gamela tribe, in the state of Maranhão, in northeastern Brazil. According to the Indigenous Missionary Council, an advocacy group, 22 Indians were wounded, including three children. Many were shot in the back or had their wrists chopped.

Soon after the attack, the Ministry of Justice announced on its website that it would investigate “the incident between small farmers and alleged indigenous people.” (Minutes later, the word “alleged” was removed.)

This shouldn’t have come as a surprise. It was the third reported attack on Gamela people in three years and part of a trend of assaults against indigenous Brazilians. Every week seems to bring reports of a new atrocity committed against indigenous people in some remote part of the country. But nothing seems to shock our society anymore. Not even when, a few weeks ago, a 1-year-old from the Manchineri tribe was shot in the head.

These attacks are part of a larger pattern of abuse, marginalization and neglect. Since 2007, 833 Indians have been murdered and 351 have committed suicide, according to the Special Secretariat for Indigenous Health — rates far above the national average. Among children, the mortality rate is two times higher than in the rest of the Brazilian population.

According to the census, there are around 900,000 Indians left from the original estimated three to five million who inhabited the country when the Portuguese settlers arrived in 1500. Diseases imported from Europe wiped out millions during the first century of contact. Later the Indians were enslaved on plantations. But the genocide didn’t end then. Over the past century, tens of thousands of indigenous people have been victims of rape, torture and mass murder, perpetrated with the help of a governmental agency, the Indian Protection Service. Some tribes were completely eliminated. Today, only 12.5 percent of Brazilian land remains in the possession of indigenous people.

The story of the Guarani-Kaiowa, from the western state of Mato Grosso do Sul, is typical of the trials indigenous groups face. The Guarani-Kaiowa were first expelled from their ancestral lands in the late 1940s, when the government granted farmers and ranchers titles to the area. They then moved to overcrowded reservations and roadside camps.

The tribe’s situation seemed poised to improve in 1988, when Brazil adopted a new Constitution that recognized the rights of indigenous people to the lands they traditionally occupied. The government was supposed to demarcate those territories within five years of the Constitution’s enactment. It took longer than expected: The identification and demarcation of the Guarani-Kaiowa’s land started in 1999 and was completed in 2005. They returned to their territory — but only briefly. Months later, following a petition by local ranchers, a federal judge suspended the decree that would have officially demarcated their land. Once again, the tribe was evicted.

In August 2015, some of the Guarani-Kaiowa decided to reoccupy part of their territory. They camped on land owned by ranchers. The landholders had other plans: According to reports, they hired armed militias to try to drive the tribe out. Semião Vilhalva, a tribal leader, was shot and killed. There were accounts of torture, rape and child abduction. Less than a year later, another attack killed a Guarani-Kaiowa leader and nine people were shot. Five local farmers were detained for taking part in the raid but were released after a few months.

The indigenous people who aren’t killed or abducted face another challenge: being erased. Since many of them have been pushed to the outskirts of cities and towns, and forced to adopt new habits (like wearing jeans, riding motorcycles and using cellphones), they also have to face the stigma of being called “fake Indians.” Soon before the attack in Maranhão last month, a congressman publicly called the victims “pseudo-indigenous people.”

After the murder of Mr. Vilhalva, the Guarani-Kaiowa tribal leader, the United Nations human rights representative for South America, Amerigo Incalaterra, urged the government to protect the rights of indigenous people, including their right to land. Brazil’s government had delayed demarcating tribal land and allowed indigenous people to suffer violence because of conflicts with landowners, he said. Mr. Incalaterra called on the authorities “to stop evictions of Guarani-Kaiowa communities and to urgently complete the process of demarcation of their lands.”

That seems less and less likely. Around half of Brazil’s Congress is linked to the rural caucus. The government of President Michel Temer is so entangled with the rural lobby that he has just named Osmar Serraglio, a prominent member of the agribusiness caucus, as minister of justice. Mr. Temer also appointed a military general as the interim head of the National Indian Foundation, despite vigorous protests from the native communities. At the beginning of this month, a parliamentary commission created and formed by members of the rural caucus issued a report condemning the activities of “alleged” indigenous people, a dozen anthropologists, a few state’s attorneys and members of indigenous rights organizations, including the Indigenous Missionary Council.

Unless there is a public outcry in defense of Brazil’s indigenous people, they will continue to die — cut off from their lands, officially silenced, murdered, ravaged by malnutrition and disease — and the genocide will be complete.

Vanessa Barbara, a contributing opinion writer, is the author of two novels and two nonfiction books in Portuguese.