The West Can’t Smell What Eurasia is Cooking

A tectonic geopolitical shift happened in Astana, Kazakhstan, only a few days ago, and yet barely a ripple registered in Atlanticist circles. 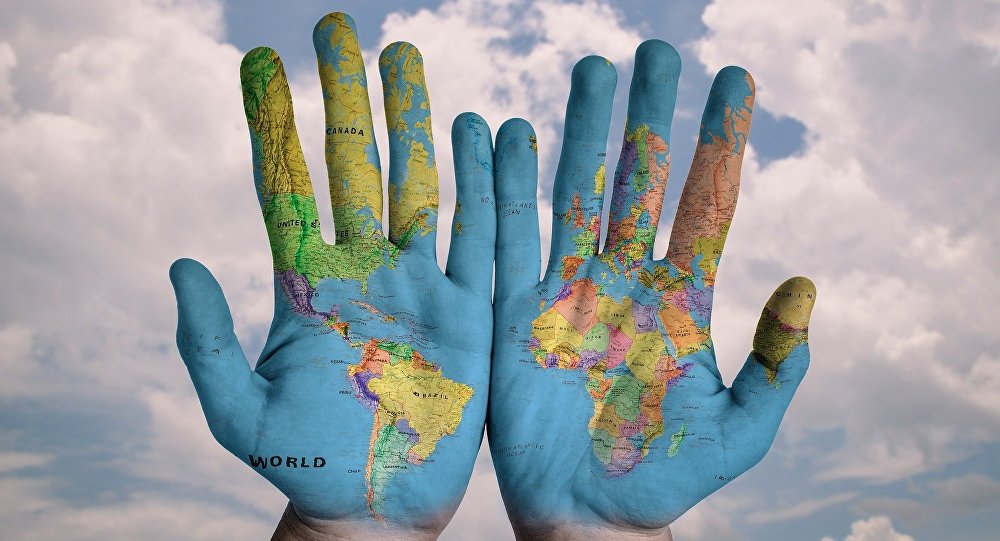 16 Jun 2017 – At the annual summit of the Shanghai Cooperation Organization (SCO), founded in 2001, both India and Pakistan were admitted as full members, alongside Russia, China and four Central Asian “stans” (Kazakhstan, Uzbekistan, Kyrgyzstan and Tajikistan).

So now the SCO not only qualifies as the largest political organization – by area and population – in the world; it also unites four nuclear powers. The G-7 is irrelevant, as the latest summit in Taormina made it clear. The real action now, apart from the G-20, also lays in this alternative G-8.

Permanently derided in the West for a decade and a half as a mere talk shop, the SCO, slowly but surely, keeps advancing a set up that Chinese President Xi Jinping qualifies, in a subdued manner, as “a new type of international relations featuring win-win cooperation.”

That’s the least one can say when you have China, India and Pakistan in the same group.

The SCO’s trademark, under the radar game is quite subtle. The initial emphasis, as we were entering the post-9/11 world, was to fight what the Chinese qualify as “the three evils” of terrorism, separatism and extremism. Beijing – and Moscow – from the beginning were thinking about the Taliban in Afghanistan, and their Central Asian connections, especially via the Islamic Movement of Uzbekistan (IMU). 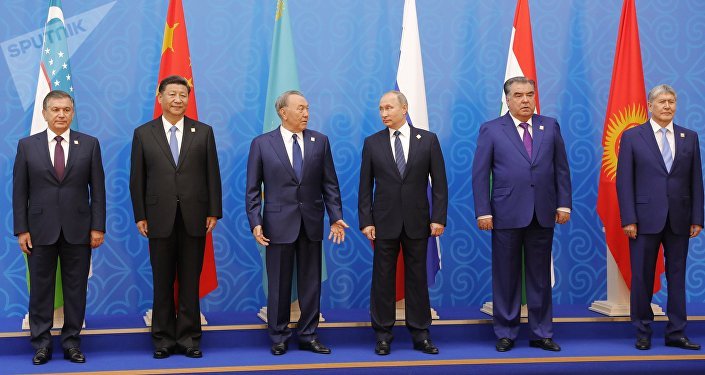 Now the SCO is actively warning about the security “deterioration” in Afghanistan and calling for all members to support the “peace and reconciliation” process. That’s code for the SCO from now on directly engaged in finding an “all-Asian” Afghan solution – with both India and Pakistan on board – that should transcend the failed Pentagon “remedy”; more troops.

NATO, by the way, miserably lost its war in Afghanistan. The Taliban control at least 60% of the country – and counting. And adding supreme insult to predictable injury, the Islamic State Khorasan (ISK) – Daesh’s branch in Afghanistan – has just captured Tora Bora, where way back in late 2001 the Pentagon’s B-52s were bombing already-escaped Osama bin Laden and Ayman al-Zawahiri.

Make no mistake; there will be SCO action in Afghanistan. And that will include bringing the Taliban to the negotiating table. China has taken over the rotating presidency of the SCO and will be keen to show practical results in the next summit in June 2018.

Step on the gas, pay in yuan

The SCO has also steadily evolved in terms of economic cooperation. Last year Gu Xueming, head of the Chinese Academy of International Trade and Economic Cooperation at the Ministry of Commerce, proposed a SCO economic think tank alliance, also tasked to study the set up of SCO free trade zones.

This spells out further economic integration – already ongoing for scores of small-and medium-sized businesses. The trend is inevitable, in parallel to the interpenetration of the New Silk Roads, a.k.a. Belt and Road Initiative (BRI) and the Russian-led Eurasia Economic Union (EEU).

So no wonder at their bilateral meeting in Astana, Xi and President Putin once again exhorted the merging of BRI and EEU. And we’re not talking only about the BRI, EEU and SCO trio; that also concerns the Asian Infrastructure Investment Bank (AIIB), the BRICS’s New Development Bank (NDB), the Chinese Silk Road Fund — a full array of politico-economic mechanisms.

Things are moving incredibly fast – on all fronts. At a recent “Future of Asia” conference in Tokyo, the supposedly rabid anti-Chinese Prime Minister Shinzo Abe announced, although subject to many conditions, that Japan is ready to cooperate with BRI, with its “potential to connect East and West as well as the diverse regions found in between.”  A possible China-Japan reset would add the definitive momentum to the BRI, EEU and SCO interpenetration.

Crucially, both China and Russia are also on the same page in terms of fast-tracking Iran’s admission as a full SCO member.

Now compare it with US Secretary of State “T.Rex” Tillerson calling for regime change in Iran.

As Eurasia integration inexorably moves in leaps and bounds, the contrast with the proverbially swampy Atlanticist arrogance could not be more glaring.

When Moscow decided its game-changing intervention in the Syria tragedy, no analyst in the West apart from Alastair Crooke identified how that was configuring a sort of SCO-style operation; true, Iran, Iraq, Syria and Hezbollah are not part of the SCO, but the way they coordinated with Russia spelled out a feasible alternative to unilateral NATO humanitarian imperialism and regime change-style adventures.

The “4+1” mechanism – Russia, Iran, Iraq, Syria and Hezbollah – quietly backed by China, was set up to fight all forms of Salafi-jihadi terrorism and at the same time to prevent regime change in Damascus, a NATO-GCC wet dream.

Now with shambolic Trump foreign policy hardly coordinating any policy at all apart from harassing Iran, both Russia and China understand how Iranian membership of the SCO should be key.

Beijing already understood the ultra high stakes ramifications via its relationship with Qatar – a key natural gas provider sooner or later to accept payment for energy in yuan.

Qatar’s quiet pivot towards Iran – the key reason that drove the cornered House of Saud absolutely bonkers – revolves around the common exploitation of the largest gas field in the world, North Dome/South Pars, which they share in the Persian Gulf.

It took a while for Doha to realize that after the “4+1” established facts on the ground a gas pipeline from Qatar to Turkey via Saudi Arabia and Syria for the European market will never happen. Ankara also knows it. But there might eventually be an Iran-Iraq-Syria pipeline – even with a possible extension to Turkey — with gas jointly provided by North Dome/South Pars.

That would revolutionize the entire energy equation in Southwest Asia; and a key casualty might be petrodollar hegemony, to which Saudi Arabia and the UAE duly abide.

Imagine Qatar/Iran selling their future Europe-bound gas in euros, not in US dollars, just like the Chinese will adamantly move to pay Qatar – and Saudi Arabia – in yuan for their energy supplies.

Make no mistake; the – inexorable – future spells out trading energy not in petrodollars but in yuan, which is convertible to gold.

It’s never enough to stress the importance of the Russia-China strategic partnership coordinating all their policies regarding Eurasia integration, including efforts by the usual suspects to thwart it.

During the first part of 2017, Moscow and Beijing’s working hypothesis was that the Trump administration was keen to engage Russia as a partner for new oil and gas projects in Eurasia. In a Kissingerian vein, suggested to Trump, the Russia-China strategic partnership would be weakened while Washington would increase pressure on Beijing in multiple fronts.

Well, that may not happen anytime soon – considering the pervasive, demented anti-Russia hysteria consuming the Beltway.

What does remain in place is the GWOT (global war on terror) corollary of Trump’s policy; to rollback – by all means necessary – increasing Iranian influence all across Southwest Asia. And that implies boosting the geopolitical power of the GCC – led by the noxious House of Saud.

That would explain Trump’s enthusiastic twitter boost of the House of Saud’s anti-Qatar blitzkrieg – which doubles as a move against Iran. Beijing for its part is watching closely, and has identified it for what it is; an attempt to disturb the progress of the New Silk Roads.

At the same time, Beijing and Moscow cannot help being amused by the glaring inconsistencies. The Pentagon does not seem inclined to annex the rest of Qatar; the Al Udeid air base and the HQ of Centcom are enough. Pentagon head “Mad Dog” Mattis was more than pleased to sell $12 billion in F-15s to “supporter of terrorism” Doha. Trump “supports” the House of Saud. Mattis “supports” Doha. Tillerson declines to take sides.

The GCC as we know it may be dead and buried – as well as the embryonic Arab NATO feted by Trump with that pathetic sword dance in Riyadh. And yet Moscow and Beijing – as well as Tehran – are fully aware how these setbacks will only exacerbate the Exceptionalistan environment, a.k.a. the swamp, a.k.a. the deep state, to double down, and continue to provoke havoc.

The Caliphate in the “Syraq” desert is now dead – especially if Russia confirms the Caliph himself has gone to meet his maker. Too bad – because a totally destabilized Syria would be perfect to destabilize Russia from the Caucasus to Central Asia; Russian intelligence has always been focused on those 900 km from Aleppo to Grozny.

Like Terminator, the US deep state will be back. An expanded wet dream remains to create the conditions for the destabilization of a vast stretch from the Levant to South Asia — with possible future terror waves expanding north to Russia and east to China. The target: the interpenetration of BRI, EEU and the SCO.

To compound it, the Pentagon will refuse to abandon Afghanistan – a bridgehead to wreaking havoc in Central Asia. What could possibly go wrong? After all, Daesh is now virtually positioned in Central Asia, not far from Xinjiang and the China-Pakistan Economic Corridor (CPEC) – a key node of BRI.

Still, the Saudi anti-Qatar blitzkrieg – as much as it’s already unraveling – may in the medium term precipitate a monumental seismic shift, accelerating Iran’s as well as Turkey’s entry into the SCO; consolidating Doha’s pivot towards an entente with both Russia and Iran; and anticipating a serious blow to petrodollar hegemony. All this must have been discussed in detail in Astana at the SCO summit – mostly at the Putin-Xi bilateral.

As Exceptionalistan grows increasingly erratic, all key strategic decisions ahead rest with Xi-Putin – and they know it. What’s certain is that the SCO is bound to get involved deeper and deeper in protecting the key project of the young 21st century; Eurasia integration.