Made in the West: New Era of Global Famine Thanks to War and Chaos 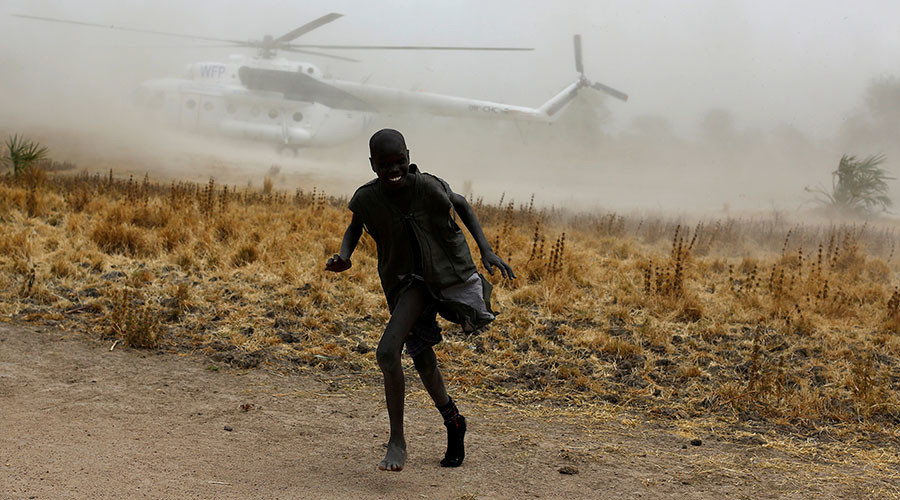 16 Jul 2017 – The famines threatening many parts of the world today have one thing in common: Western aggression and destabilization.

In February of this year, the world’s first famine in six years was officially declared in South Sudan. A month later, the UN’s humanitarian chief Stephen O’Brien warned the Security Council that three other countries – Yemen, Somalia, and Nigeria – also stood on the brink of famine, with 20 million at risk of starving to death within months.

The world, he said, was now “facing the largest humanitarian crisis since the creation of the United Nations.” Unless $4.4billion in emergency funds was raised by the end of March, warned UN Secretary-General Antonio Guterres, 20 million would likely starve to death. When the deadline was reached, he had received less than a tenth of that, a paltry $423 million.

The amount raised has increased since then but stands at little above one-third of the target. It is almost certain not to be met, with donations dropping sharply since mid-May.

For context, the New York Times helpfully pointed out that $4.4billion is almost the same amount Britain has made selling weapons to Saudi Arabia in the past two years – most of which have been used against the famine-stricken Yemenis, and less than 10 percent of the $54 billion in additional spending Donald Trump pledged for the US military.

Yemen was in the news again this week, twice. First the announcement by the Red Cross that cholera cases in Yemen have now reached 300,000. Then came the ruling by Britain’s High Court – choosing to believe private government assurances over volumes of first-hand eyewitness accounts – that the UK government’s arming of the vicious Saudi war against the Yemeni people is perfectly above board. These two declarations are not unrelated. For it is precisely Britain’s proxy war against Yemen that has led to the medieval levels of famine and disease now sweeping the country.

In October 2015, the head of the International Red Cross wrote that “Yemen after five months looks Syria after five years.” Today, according to Save the Children, one Yemeni child is infected with cholera every 35 seconds. This epidemic comes hot on the heels of a dengue fever outbreak, which the World Health Organization struggled to control due to the “near collapse of the health system,” and “disruption of water supplies” resulting from the Western-supplied bombing campaign. Hospitals have regularly been bombed. Following Philip Hammond’s justification of bombing raids on three Yemeni hospitals in as many months, the MSF warned that targeting hospitals was now becoming the “new normal.”

The bombing of hospitals and grain distribution centers, however, is just part of the story of the West’s genocide against the Yemeni people. Yemen is dependent on imports for more than 80 percent of its fuel, food, and medicine, and 70 percent of these imports come through the Huydadeh port. This port was bombed in August 2015 by the Saudi-led coalition and has been blockaded ever since, directly creating the current situation in which 21 million suffer food shortages, including seven million facing famine. As the UN Special Rapporteur on human rights and international sanctions has noted, this blockade is “one of the main causes of the humanitarian catastrophe,” helping to lead to what he called “this man-made famine.” Needless to say, this blockade – along with every aspect of the Saudi genocide in the Yemen – is fully supported by the US and Britain.

Yemen is not the only place where Western policy is leading to famine.

This week marks the sixth anniversary of the independence of South Sudan. For the second year in a row, the planned celebrations have been canceled because, in the midst of starvation and civil war, there is nothing to celebrate.

The country’s descent into famine was officially announced on 20th February this year, with 100,000 starving and a further one million on the brink of starvation. The established criteria for a famine are that 20 percent of a population must be suffering “extreme food shortages,” 30 percent suffering acute malnutrition, and at least one per 5,000 dying each day. While those criteria are no longer being met; acute hunger has now reached six million, up from five million in February – over half the population. As in Yemen, this is a crisis of biblical proportions. As in Yemen, it is man-made. And, as in Yemen, it is the thoroughly predictable outcome of Western militarism.The US and Britain were instrumental in the partition of Sudan in 2011, and it is precisely this partition which has bequeathed the country’s current tragedy. Just as in Libya, in the same year, a loose coalition of rebels with no unified program was effectively placed in power by Western largesse. And just as in Libya, the inevitable collapse of this coalition has brought total devastation to the country.

The Southern People’s Liberation Movement was formed by rebel army colonel John Garang in 1983, and in the 1990s, under Clinton, the US began pouring millions of dollars into the insurgent movement. Although formally an uprising against the government in Khartoum, it has often relied on an appeal to ethnic chauvanism to galvanize support. According to former national committee member Dr. Peter Nyaba, for example, the movement’s very first mobilization “that took more than ten thousand Bor youth to SPLA training camps in 1983 was not for the national agenda of liberation but to settle local scores with their neighbors, the Murles or the Nuers.” Similarly, Riek Machar’s faction of the SPLM, based mainly within the Nuer community, conducted a massacre of thousands of Dinka civilians in 1991. Dr. Nyaba argues that political training was neglected in favor of, often very brutal, military training, leading to often horrific excesses against the population under their control. After liberating a particular area, said Nyaba, the movement should have instituted “democratic reforms: a popular justice system, a new system of education, health and veterinary services.” Such a move, he says, “would have given the SPLM the opportunity to prove itself to the people and the world and, therefore, to build a solid popular power base making the SPLM/A the authentic representative of the people…the ‘New Sudan’ would have been born in the physical and objective reality of the people, allowing the SPLM/A to acquire political sovereignty and diplomatic recognition.” These, indeed, are the normal steps taken by genuinely successful revolutionary movements the world over. But this is not what happened. Rather, says Nyaba, the SPLM “denigrated into an agent of plunder, pillage and destructive conquest.” It was at precisely this point that the US began funding the movement, with the initial $20 million provided by Clinton soon expanding to $100 million per year under Bush’s satirically-named “Sudan Peace Act” of 2002.

Just as in Libya, the impact of such US largesse has been to enable insurgent groups to achieve their aims without providing the visionary leadership or mass organizational skills necessary to galvanize genuine mass support. Put simply; US support has rendered mass support unnecessary. Genuine revolutions – that is, revolutions attained primarily through the efforts of the masses themselves, rather than through pressure applied by external patrons – can only succeed with a visionary program capable of winning the total commitment of the masses. In South Sudan, the SPLM, thanks to US support, were able to come to power without this. The long-term impact of this lack of popular, inspirational leadership has been an ideological vacuum into which have poured power struggles over patronage and resource networks.

Confident of external support, the SPLM – and its leader since Garang’s death in 2005, Salva Kiir – had no pressing need to win the support of all the tribes of the South. Without Western funding, Kiir would have to have reached out to the Nuer and the Murle and the other non-Dinka groups to secure enough support to force concessions from Sudan’s government. Had he done so, on the basis of a genuine mass program capable of galvanizing all the peoples of southern Sudan on a non-ethnic basis, this very program would have formed the basis of a viable unity government following independence. However, confident of US backing, Kiir had no need to develop any of this. Instead, his clear patronage from the US enabled him to impose a false unity on his Nuer and Shilik rivals, in which his proximity to the US alone was enough to force them to fall in line if they did not want to be completely excluded from the power and the money coming his way. Political struggles for mass support were to be eclipsed by factional rivalries over who would control the flow of resources.The same pattern has continued after independence. Assuming, correctly, US support would continue to flow, President Kiir has had no particular need to endear himself to those outside his primary Dinka constituency, even going so far as to sack his Nuer deputy Riek Machar in 2013, triggering the latest round of civil war. This latest round of war has taken on particularly nasty ethnic dimensions, as the SPLM’s rival factions, for years bound together by US dollars rather than by a genuine program of unity, unravels.

While Yemen’s near-famine was caused by the Western-directed bombing and blockade of that country, then, South Sudan’s actual famine is the result of years of proxy war funded by the West and the disastrous partition it produced. The situation in Nigeria is also a result of war, in this case, the Boko Haram insurgency – an insurgency which owes its massive spread in recent years directly to the NATO destruction of Libya, which opened up the country’s weapons dumps to Boko Haram and its partners. Have no doubt, the latest wave of famine is thus a direct by-product of Western aggression – creating another 20 million victims for whom US and British governments must be brought to justice.

Yemen crisis: ‘Made in the USA’

Dan Glazebrook is a freelance political writer who has written for RT, Counterpunch, Z magazine, the Morning Star, the Guardian, the New Statesman, the Independent and Middle East Eye, amongst others. His first book Divide and Ruin: The West’s Imperial Strategy in an Age of Crisis was published by Liberation Media in October 2013. It featured a collection of articles written from 2009 onwards examining the links between economic collapse, the rise of the BRICS, war on Libya and Syria and ‘austerity’. He is currently researching a book on US-British use of sectarian death squads against independent states and movements from Northern Ireland and Central America in the 1970s and 80s to the Middle East and Africa today.